Lithuanian FM: "EU-Azerbaijan co-op is an important element of our political dialogue" - EXCLUSIVE 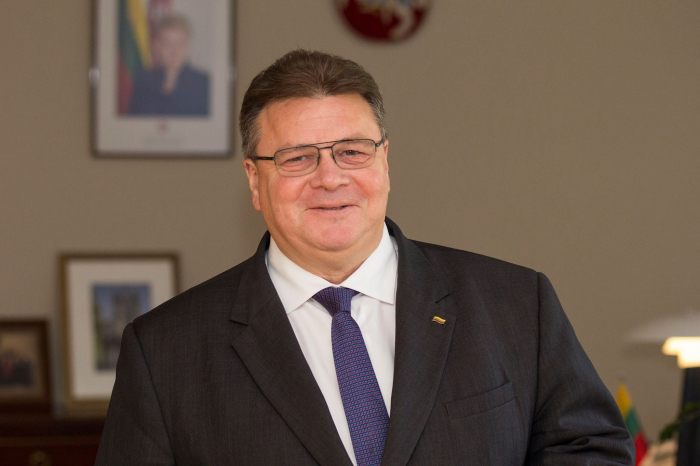 In 2019, Azerbaijan and Lithuania will celebrate the 100th anniversary of the establishment of diplomatic relations. Lithuania opened its consular office in Baku on March 27, 1919,. Today, both countries have established a close political dialogue, each year exchanging visits and consultations at various levels, both at the level of parliaments and at the level of foreign ministries. What important events happened in 2018 for Azerbaijan and Lithuania? In which areas is progress being made? In which sectors of the economy are there great opportunities to strengthen bilateral relations? Linas Linkevičius, Minister of Foreign Affairs of the Republic of Lithuania, answered these and other questions of Vzglyad.az.

- How would you assess the results of the Azerbaijani-Lithuanian cooperation in 2018?

Last year was particularly important to our countries. In 2018, we celebrated the centennial anniversaries of the establishment of our modern democratic states. Lithuania and Azerbaijan are engaged in a close political dialogue, we share mutual respect and understanding. In 2018, we continued to conduct our regular exchange of visits and consultations at different levels, including between parliaments and foreign ministries, where we discussed a wide range of issues of common interest.

Cooperation between the European Union and Azerbaijan is yet another important element of our political dialogue. We are pleased that last year the EU and Azerbaijan agreed on Partnership Priorities that will guide and enhance our partnership over the coming years.

Last year also brought a good progress in the negotiations on a new EU-Azerbaijan agreement and we very much look forward to their successful conclusion. Once signed and ratified, the agreement will open up new avenues for engagement.

- In addition to the bilateral political dialogue, in what areas are Azerbaijan and Lithuania developing cooperation?

Besides the bilateral political dialogue, Lithuania and Azerbaijan cooperate in multiple areas, including trade, public administration, education, etc. Almost a decade ago, our countries established an intergovernmental commission for economic cooperation. Five meetings of the commission have taken place so far.

Lithuania’s state institutions have been very actively involved in the implementation of the EU Twinning projects in Azerbaijan. Your country has already benefited from eight Twinning projects implemented with Lithuanian institutions. The most recently implemented projects aimed at strengthening the higher education system and at supporting the implementation of mandatory health insurance system in Azerbaijan. In addition, several Lithuanian municipalities are engaged in cooperation with their Azerbaijani counterparts and are sharing their experience at a local level.

In the last decade, Lithuania has also become an attractive place to study for young people from Azerbaijan. Currently, almost 200 students from Azerbaijan study in our universities.

In 2017, the trade turnover between Lithuania and Azerbaijan reached 34.8 million EUR and increased by 12.7%. Lithuanian exports accounted for 32.6 million EUR (increase 17.5%), imports from Azerbaijan – 2.2 million EUR. In 2018, however, we observed a slight fall off in trade; final statistics are not available yet.

- As you noted, there was a decrease in trade indicators last year . What can Lithuania offer to the Azerbaijani market for the growth of commodity turnover between the two countries?

Azerbaijan is one of our main trading partners in South Caucasus and there is a lot of potential for a deeper trade and investment cooperation. Situated on the EU border with CEE and the CIS, Lithuania is a gateway to huge potential markets. Thanks to the EU’s northernmost ice–free port in Klaipėda, our country provides a truly global access. The best way to foster our economic and trade cooperation is to exchange our business delegations and encourage direct B2B contacts.

Cooperation in the fields of information technology (IT), transport and logistics, furniture, electronic equipment, medicine and food industries have the largest potential for growth. Lithuania could be a gateway to the EU for Azerbaijan producers. We offer attractive conditions for investing in free trade zones, engineering, industrial equipment, automotive, electronics, biotech, clean-tech, ICT, R&D, transportation sectors. Ranked 4th in the world for fulfilling business ICT needs, Lithuanian companies can offer innovative IT solutions for Azerbaijan institutions and private companies. Lithuania is one of the leading countries in the EU in the field of the implementation of e-government. We can efficiently contribute to implementing cyber security solutions in Azerbaijan. Renewable energy could be another field of interest (solar panels, biomass energy). Lithuania is becoming a European hub for block chain technology and fintech industry, so we offer Azerbaijani businesses to make use of our favorable legislative and business environment in the EU.

- How do you assess the development prospects of the Azerbaijani-Lithuanian cooperation in the field of transport? Is Lithuania's participation in the Baku-Tbilisi-Kars railway project considered?

The strategic location of both Lithuania and Azerbaijan at the crossroads between the East and West, North and South, allows for a good outreach to neighboring markets and naturally implicates a great potential for cooperation in the field of transport. Lithuania provides wide opportunities for safe, fast, and cost-saving transportation of Azerbaijani cargo to Europe and Scandinavian countries.

In May 2016 Azerbaijan signed a protocol on Azerbaijan Railways CJSC's joining the “Viking Train” project. It is an important element of the Lithuanian-Azerbaijan cooperation in this field. “Viking Train”is a joint project of the Lithuanian, Belarusian and Ukrainian Railways, stevedoring companies in Klaipeda, Odessa and Ilyichevsk seaports, connecting Baltic and Black sea ports. The Baku-Tbilisi-Kars railway can help to strengthen the already existing cooperation between our two countries in the field of transport.

- Today, the ASAN Service is successfully operating in Azerbaijan. This is the Azerbaijani state agency for the provision of services to citizens and social innovations under the President of the Republic of Azerbaijan, which operate on the principle of “single space”. In the centers of the ASAN Service, state services provide various services to the country's population. A number of countries are studying the Azerbaijani experience in this direction, and even there are countries that have already adopted the experience of our country. For example, a service center ASAN has recently opened in Afghanistan. How do you evaluate the idea of ​​opening a similar service in Lithuania?

As mentioned before, Lithuania is one of the top leading EU countries in the implementation of e-government. Every year, Lithuanian citizens have more and more opportunities to communicate with government institutions and use public services through electronic means from their homes. We believe that competent institutions of our countries could examine their experience in this field and they would definitely find some practices worth sharing between Lithuania and Azerbaijan.

- One of the main tasks of Azerbaijan is the peaceful settlement of the Armenian-Azerbaijani Nagorno-Karabakh conflict. How do you assess the prospects for resolution of this conflict in the near future?

We follow the situation in South Caucasus closely and we are concerned over the confrontational rhetoric and a continued arms race. In this context, we welcome a significant decrease in a number of ceasefire violations along the Line of Contact and the state border between Armenia and Azerbaijan, as well as the renewal of the dialogue between Azerbaijani and Armenian officials. We welcome the steps taken by both sides, especially the agreement on the need to prepare their populations for peace.

Lithuania supports a peaceful settlement of the Nagorno-Karabakh conflict through negotiations based on full adherence to fundamental norms and principles of international law enshrined in the Charter of the United Nations and the Helsinki Final Act. We also fully support the mediation efforts rendered by the OSCE Minsk Group Co-Chairs.

- In 2019, Azerbaijan and Lithuania are going to celebrate the 100th anniversary of establishing diplomatic relations. What events are planned for this year?

Indeed, 27 March 1919 is the day when Lithuania opened its consular office in Baku. The Embassy of Lithuania cooperates with the Lithuanian State Archives and the archives of Azerbaijan to find out more historical facts and to duly prepare to commemorate the centenary.