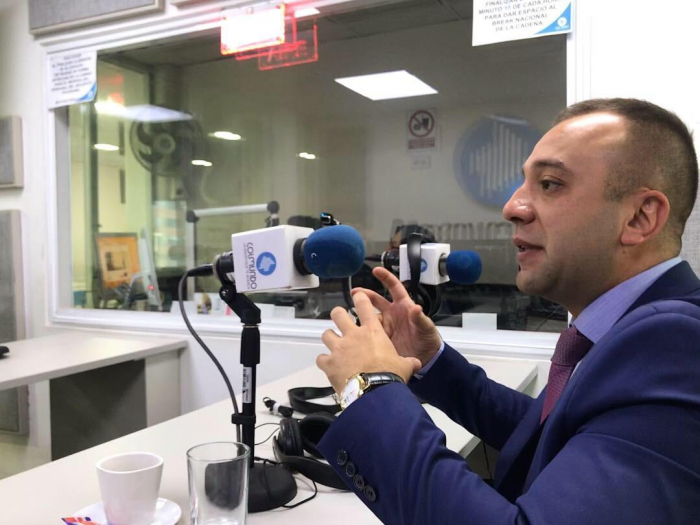 Various projects are being implemented by the Embassy of Azerbaijan in Bogota to widely promote Azerbaijan in Colombia, the embassy told Azvision.az.

As such, ColMundo, one of Colombia’s three most popular radio stations, has prepared a one-hour special program devoted to the culture and history of Azerbaijan.

He said the centuries-old cultural heritage and national wealth of Azerbaijani people are known across the world today, and a number of historical monuments of Azerbaijan are protected by UNESCO. He also stressed that musical art, national cuisine and Azerbaijani carpets (Karabakh, Shirvan, Guba, Nakhchivan, Irevan, etc.), demonstrating the richness and antiquity of Azerbaijani culture, are successfully represented at international exhibitions and events.

Zeynalov listed some of the progressive reforms and high economic indicators achieved in Azerbaijan under the leadership of President Ilham Aliyev. He also informed the listeners about the balanced domestic and foreign policies of the country, as well as the global transnational energy, transport and communications projects.

Moreover, the chargé d'affaires provided detailed information on the Armenia-Azerbaijan Nagorno-Karabakh conflict, the Armenian policy of invasion and ethnic cleansing and its ongoing military aggression against Azerbaijan, as well as the Khojaly Genocide, the 27th anniversary of which will soon be commemorated.

About 75 percent of the Colombian population has a bigger preference for radio over other media, and radio channels gather over 38 million listeners every day across the country, according to statistics.