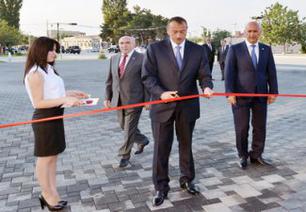 On 18 July, President of Azerbaijan Ilham Aliyev attended opening of the Heydar Aliyev Center in Siyazan, official website of the president reported.
President Ilham Aliyev was informed that the area where the center is located is one of the favorite destinations of Siyazan residents. All the conditions for recreation of residents and visitors have been created here. Reconstruction, landscaping and planting works have turned this place into one of the most beautiful parts of Siyazan.

The Head of State cut the ribbon symbolizing the opening of the Center.

It was noted that the Centre demonstrates the homage to the memory of a national leader by Siyazan residents. The Centre also plays an important role in promotion and study of the rich and diverse heritage of the great leader. Photographs and other artifacts gathered here once again prove that Azerbaijan`s transition from a period of decline to an era of development and its current progress, the growth of international prestige are associated with the invaluable merits of national leader Heydar Aliyev to the motherland and the people. Heydar Aliyev Center, built on the avenue named after the great leader, makes the appearance of the city more beautiful.

It was noted that the three-story center consists of 14 rooms. Its construction based on a modern original project was started in January and completed in July 2013. Its total area is 1,200 square meters. It demonstrates books, photographs, diplomas and other documents about the life and work of the world famous political figure Heydar Aliyev. The photographs reflect his childhood, adolescence and college years and a trip to Siyazan while working in the Committee of State Security as the first secretary of the Central Committee of the Communist Party of Azerbaijan. The Center also has pictures reflecting Heydar Aliyev’s trip to Siyazan as the first deputy chairman of the USSR Council of Ministers, the President of the independent Republic of Azerbaijan.

It was reported that the Center also has a photo stand reflecting President Ilham Aliyev’s trip to Siyazan. The museum and weaving circle will operate on the first floor of the building. A conference room, a design and painting studio, exhibition hall are situated the second floor. An internet cafe, a library, and foreign language courses are located on the third floor.

After viewing the Center, President Ilham Aliyev met with representatives of the local public.

Teacher of secondary school No. 2 of Siyazan city Ramila Seyidova thanked the President for attention and support of the development of the district.