First Vice-President of Azerbaijan Mehriban Aliyeva held a one-on-one meeting with the prime minister of France Édouard Philippe on the sidelines of her visit to France. 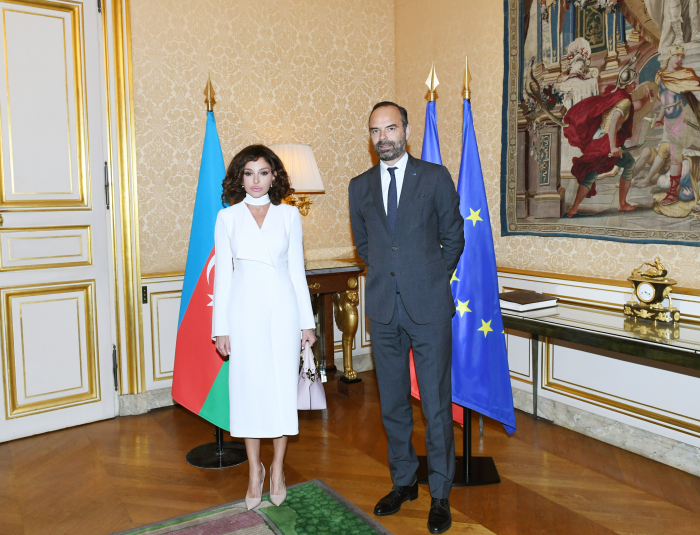 French PM Édouard Philippe touched on the significance of Azerbaijani President Ilham Aliyev’s visit to France and his meeting with French president Emmanuel Macron for the expansion of bilateral relations. Besides, Édouard Philippe mentioned the contributions of Azerbaijan’s First VP Mehriban Aliyeva while commenting on the successful development of Azerbaijan-France ties in political, economic and other fields. He also emphasized prospects for further cooperation between the two countries.

First Vice-President Mehriban Aliyeva, in turn, hailed the development of relations between Azerbaijan and France. Mehriban Aliyeva expressed her confidence that her visit to France will make a significant contribution to the development of cooperation between the two countries. Pointing out that there is a great potential for economic cooperation, the first vice-president said that 50 French companies are currently operating in Azerbaijan. Speaking about the economic development in Azerbaijan, Mrs. Aliyeva stressed that the country ranked 25th in World Bank’s Doing Business ranking, climbing 32 steps, and entered the list of top ten reformers. She also underlined the importance of this year’s meeting of the joint intergovernmental commission.

Pointing to the humanitarian, cultural, and scientific cooperation, Mehriban Aliyeva underlined the great interest in French language and literature in Azerbaijan. She noted that the French is taught in more than 300 schools in the country, hailing the successful operation of French Language and Literature Center at Azerbaijan University of Languages, French Language Center at Baku Slavic University, the French Lyceum and the France-Azerbaijan University in Baku.

Pointing out Azerbaijan’s stance on the Armenia-Azerbaijan Nagorno-Karabakh conflict, First Vice-President Mehriban Aliyeva noted that the current status-quo is unacceptable. She underlined the UN Security Council’s four resolutions on the settlement of the conflict, saying the dispute must be resolved on the basis of these resolutions, and norms of international law, within the territorial integrity of Azerbaijan.

Prime Minister Édouard Philippe said he remains committed to peace talks, and stands for the settlement of the conflict within international law.

Following the meeting, a ceremony of signing Azerbaijan-France documents was held with the participation of First Vice-President Mehriban Aliyeva and Prime Minister Édouard Philippe.

Azerbaijan’s Minister of Finance Samir Sharifov and Minister of State attached to the Minister for Europe and Foreign Affairs of the French Republic Jean-Baptiste Lemoyne signed “The Convention for the reconstruction of the Sumgayit-Yalama railway line of the North-South transport corridor as part of the railway sector development program” between the Republic of Azerbaijan and French Development Agency.

Chairman of Baku Metro CJSC Zaur Huseynov and Senior Executive Vice President of Thales International Raphael Eskinazi signed “The research agreement on the establishment of Operation Control Center, and the agreement on the implementation of alarm and telecommunication systems of the Khojasan depot”. 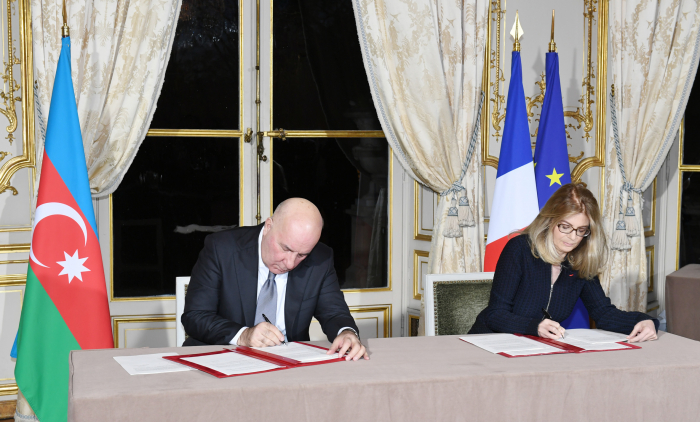