The power of our hidden senses

With mouth clicks, experts can detect whether a disc one metre away has been moved. Here's how we could all benefit from harnessing our hidden senses.

I am sitting at my desk with my eyes closed, moving a dinner plate back and forth in front of my face while repeating “Test! Test! Test!”. It may look eccentric, but I am trying to teach myself the fascinating skill of echolocation: navigating the world by echo, just like a bat, or a dolphin.

Echolocation has gained prominence in recent years as a skill that some blind people, such as the US educator Daniel Kish, use to map their surroundings with astonishing precision. They can detect trees, buildings or doorways by making a clicking sound with their mouth and listening for the echo.

But research has shown that the basics of orienting yourself this way can be learned by anyone, blind or sighted. A growing body of research encourages us to expand our sensory potential – awakening senses that have been neglected, suppressed, or even considered outside the human realm.

Human echolocation has been known as a concept since the 1940s. But it has only been studied systematically in the last decade, both as a potentially life-changing skill for blind people and as a way of examining how our brain deals with sensory information. 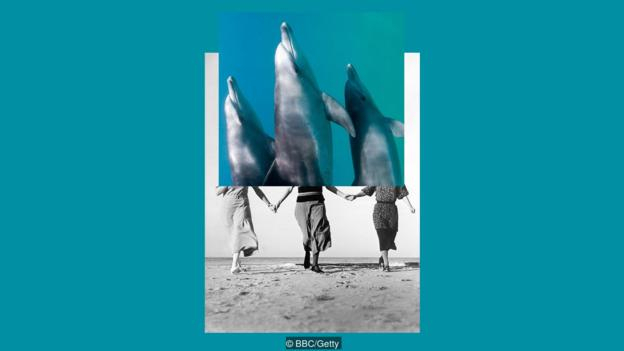 Some people are experts at navigating the world by echo, like a dolphin (Credit: BBC/Getty)

“We measure the best possible human echolocators, what we refer to as ‘echo experts’,” says Lore Thaler, a psychology professor at Durham University and one of the world’s leading experts on human echolocation. “These are typically people who’ve used it for a long time and show just really good acuity. They can do things which, if you’re new to this, you just cannot do.”

Just by using mouth clicks, echo experts can detect whether a disc one metre away from them has been shifted by about the width of a finger. They can tell whether an object 2m (6ft 6in) away is a lamppost, car or tree. Even those quite new to the skill can detect a wall more than 30m (98ft) away.

This does not mean echolocation provides people the same accuracy as vision. Some bat species can use ultrasound to hunt moths, but human echolocators struggle to track such tiny targets. And since echolocation only works for three-dimensional objects, it cannot be used to read printed texts, for example. 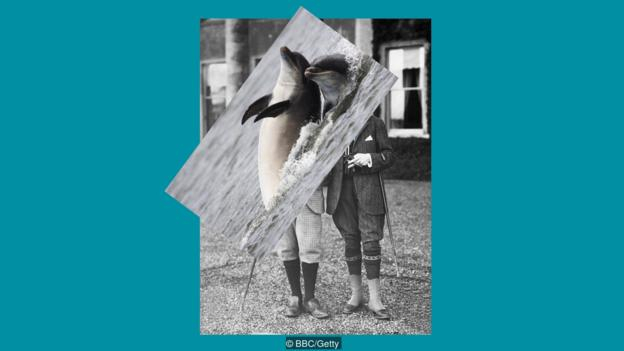 Used alongside traditional aids, echolocation can be transformative for blind people (Credit: BBC/Getty)

However, Thaler says it is still a very powerful technique. Used alongside traditional aids such as a cane or a guide dog, it can be transformative for blind people, her research has shown. It can help them travel more safely, avoid obstacles at head level, even recognise their own porch. “It’s these little things that can make a difference to how confident someone is, and if they are happy to go out,” she says.

Although Thaler is sighted, she can echolocate and has taught the technique to blind adults and even children as young as three.

“If you are in a sighted world, like we are, and then you lose your vision, you really lose a whole lot in terms of how you can access things and how you can move around,” she says. “Having echolocation in there makes it much easier, because it gives you more control over the space you’re exploring.” 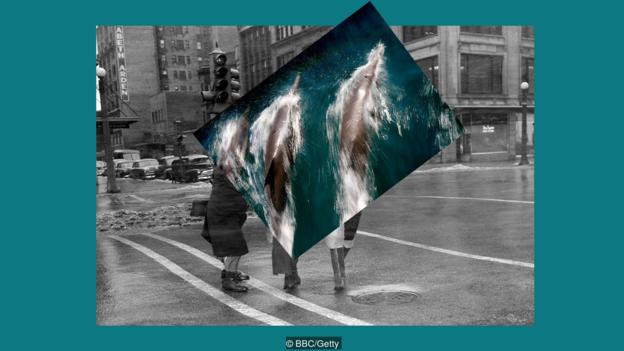 For those who aren’t sighted, echolocation can provide more control over the space being explored (Credit: BBC/Getty)

If you want to have a go, try the experiment with a plate or tray. Close your eyes, start speaking or making a clicking sound, and move it back and forth and from side to side. Listen for the change in sound.

Without opening your eyes, you will gradually be able to tell where the plate is. As a next step, Thaler recommends slowly rotating in a corner, eyes closed, and using your sound to tell whether you are facing the wall, or the room.

When sighted people learn to navigate by sound, they engage the part of their brain that usually deals with vision

Thaler and her colleagues are currently studying brain scans of sighted and blind people learning to echolocate. So far, preliminary results have shown something rather startling: when sighted people learn to navigate by sound, they engage the part of their brain that usually deals with vision.

“We like to think of vision as a sense that’s by itself, and we have certain resources dedicated to it,” such as the eyes and specific parts of the brain, says Thaler. But instead, our brain may be able to process sensory information somewhat more flexibly – “seeing” with our ears, if you like. It’s just that usually, for sighted people, there is no reason to do so. 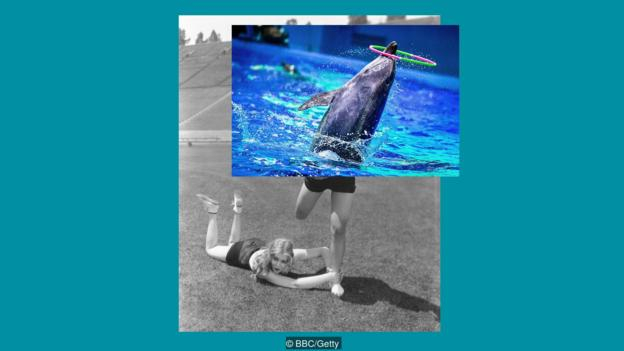 Our brain may be able to “see” with our ears – it’s just that most of us don’t try it (Credit: BBC/Getty)

As Thaler points out: “If you are a sighted person, most of the time you get the spatial stuff through vision. There’s very little incentive to extend your sensory repertoire, because you get by with vision. So why bother?”

In everyday life, our real sensory superpower lies not in any individual skill, but their combination. This is because each sense is relatively weak on its own.

“Oftentimes people are quite surprised, when they are forced to use just one [sense] in one way, how bad they are at it,” says James Negen, a research associate in the department of psychology at England’s Durham University.

Our peripheral vision, for example, is rather poor. But we can combine it with another sense, like hearing, to make out where something is – an approaching car, for example. This is known as the “bimodal precision advantage”, and can be crucial to something as simple as safely crossing the road. 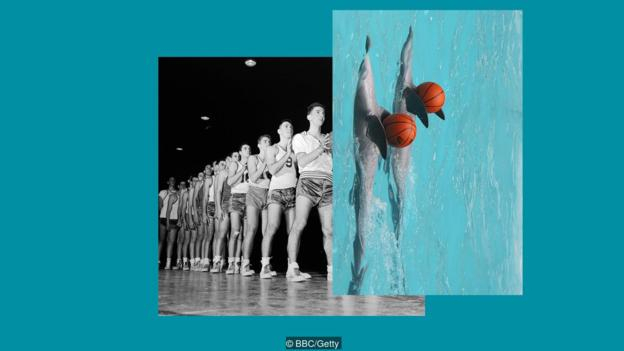 Our peripheral vision tends to be poor, but we can combine it with hearing to make out where something is (Credit: BBC/Getty)

But there’s a snag: children do not yet have this skill. 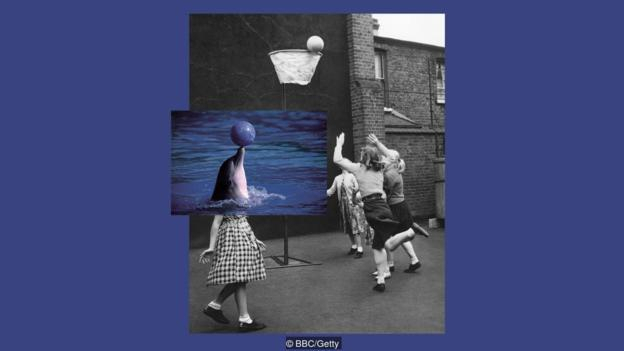 Children don’t yet have the skill of putting different senses together to be more precise (Credit: BBC/Getty)

For children who have lost some of their eyesight, this can make it hard to benefit from echolocation. Adults can use the technique together with their remaining vision, and do better than with either sense alone. Children generally cannot do this. They tend to tune either into their vision, or their hearing. The question is whether they can be taught to use both.

Negen and his team succeeded in doing this in a lab setting. They gave children detailed feedback on how they used each sense in a task. The children were then able to combine the senses like an adult and make more accurate judgements. Further research could show whether such training has a lasting effect. 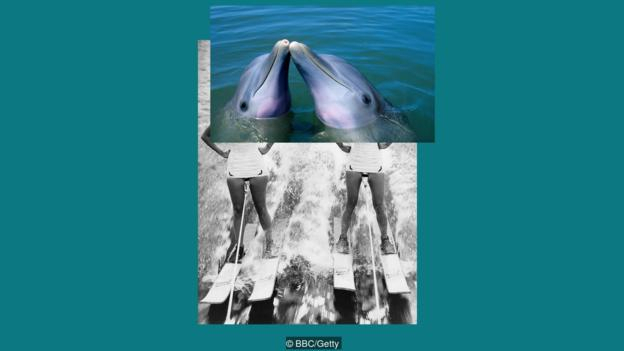 Who knows what hidden senses we have waiting to be discovered? (Credit: BBC/Getty)

I am continuing my own experiments with echolocation, using Lore Thaler’s advice for beginners. My biggest achievement so far has been to make it through a doorway with my eyes closed, without touching the sides. It’s strange to think that this ability has been inside me all my life, unused and unnoticed, until a quirky experiment with a porcelain plate brought it out.

Who knows what other hidden senses are waiting to be discovered?