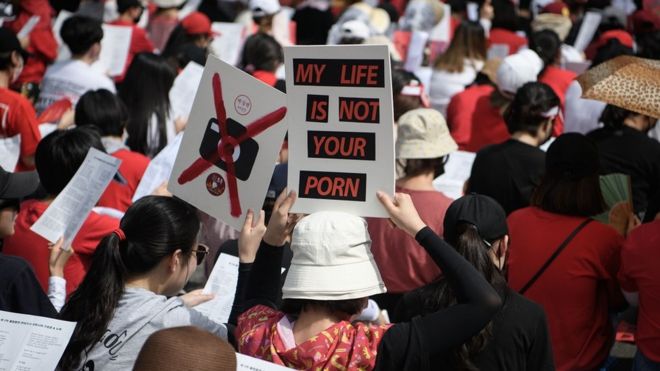 Four men have been arrested in South Korea, accused of secretly filming 1,600 hotel room guests and selling the footage via a website.

Mini-cameras were installed in TVs, hair-dryer holders and sockets. The men allegedly earned $6,200.

The covert filming of sex and nudity in South Korea has been described as epidemic and has sparked protests.

In November, a website was then created, allowing users to pay for full videos or watch 30-second clips for free.

The men reportedly posted 803 videos and evaded the law by basing the website server overseas.

Police said the men earned money from 97 paying members before the site was taken down this month.

"The police agency strictly deals with criminals who post and share illegal videos as they severely harm human dignity," a spokesman for the Seoul Metropolitan Police Agency told local newspaper the Korea Herald.

Producing and disseminating pornography is illegal in South Korea.

The ban - along with the country's fast internet access - has been blamed for the prevalence of hidden filming.

Many videos are taken secretly in toilets and changing rooms, or posted by ex-partners out for revenge.

More than 5,400 people were arrested for spy camera related crimes in 2017, but fewer than 2% were jailed.

Anger at the widespread use of filming prompted a series of protests last year in the capital Seoul, with calls for tougher sentencing.