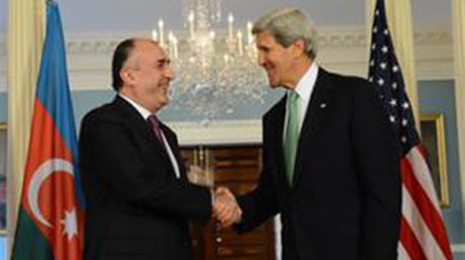 AzVision.az reprints an article by Alexandros Petersen, from The National Interest .
In late June, press around the world reported that Azerbaijan had finally chosen an export pipeline for its natural gas to reach European markets. This process took over a decade and involved in-depth involvement by Washington in the form of the U.S. Special Envoy for Eurasian Energy and the hard work of the new Bureau of Energy Resources under Secretary Kerry at the State Department. Since President Clinton`s first term, through Democratic and Republican administrations, connecting Azerbaijan`s resources with NATO allies in Europe has been a strategic priority, requiring stealthy maneuvering around Russian-backed plans to scupper it.

Moscow sought to keep its former Central European satellites dependent on its gas supplies and vulnerable to geopolitical manipulation through mid-winter cut-offs, which occurred regularly in the mid-2000s. This challenge has now been greatly reduced due to complicated energy diplomacy conducted by Azerbaijan and the United States. But Moscow has an ace up its sleeve.

The natural gas pipelines connecting Azerbaijan to Europe inevitably have to snake around neighboring Armenia because of the intractable conflict in Nagorno-Karabakh. This so-called frozen conflict has since the end of the Cold War become synonymous with the sort of faraway, messy and unrewarding conflagrations that Washington does not want to get mixed up in. But in this case, the far from frozen, but rather simmering conflict between Azerbaijan and Armenia is one that will come back to haunt the United States if it does not do its best to encourage a process towards conflict settlement.

With the fates of Egypt and Syria uncertain and Secretary Kerry stuck in the perennial logjam of Israel-Palestine, Nagorno-Karabakh actually presents the State Department with a conflict resolution process that could become a major success story. As relations with Russia worsen by the day, however, Karabakh could also be used as a pawn against U.S. interests in a region bordering Iran, with important thoroughfares for the military withdrawal from Afghanistan.

Russia has long acted as Armenia`s patron, taking its side in the active war with Azerbaijan in the 1990s and maintaining a major military base in the country with treaty promises to defend Armenia in case of attack. As Azerbaijan becomes an increasingly faithful ally of the United States—assisting in both the Afghanistan and Iraq theaters—Moscow has turned a cold shoulder to Baku, even as Azerbaijani policymakers try to maintain cordial relations with their rival`s closest ally.

If it wanted to disrupt the flow of strategically important natural gas to America`s European allies—or simply assert its pugnacity in a geopolitically contested region—Moscow could at any moment reignite the Karabakh conflict, plunging Iran`s northern border and Turkey`s east into tumult. Such a move is not without precedent: on the pretext of intervening in a similar such conflict, Russian forces invaded neighboring Georgia in 2008. Though at the time much was made of Georgian president Mikhail Saakashvili`s supposed eagerness for confrontation, almost all serious postmortems have concluded that the preplanned Russian invasion was aimed at ensuring that Georgia did not get too close to NATO and the United States.

To his credit, Secretary Kerry has on numerous occasions recognized the importance of moving towards conflict resolution on Karabakh. During the recent visit of Azerbaijan`s foreign minister to Washington, Kerry said that resolution was “critical” at this moment for many of the reasons described above. Kerry is in fact uniquely suited to shepherding a solution to the conflict. Azerbaijan is a close partner of the United States, but Kerry in particular has the trust of the Armenians, having long represented the interests of vocal Armenian-Americans as a Massachusetts senator.

To achieve success during his tenure, however, Kerry must tweak his approach. The crux of the disagreement over the contested territory of Karabakh—which is within internationally recognized Azerbaijan, but occupied by Armenia—is that the two sides cannot come to terms on the final status of the area. However, trying to find some, informal at least, agreement on final status as a pretext for negotiations is a nonstarter. This is putting the cart before the horse.

Breakthrough on Karabakh, and a much needed foreign-policy success for the Obama administration, will only come if Secretary Kerry brokers high-level negotiations and some tangible progress on the ground without preconditions. Following two decades of discussion, a number of well-known plans are on the table for the settlement`s final status. The two sides already have opinions on them and will not agree as long as the status quo persists. There is no better secretary of state in recent memory to convene such talks than Kerry.

Rather than a messy frozen conflict, Karabakh is an opportunity waiting to be seized by this administration. And given Russia`s ability to worsen the conflict to America`s disadvantage, it is an opportunity that cannot be missed.

Alexandros Petersen is the author of The World Island: Eurasian Geopolitics and the Fate of the West and co-editor of chinaincentralasia.com.