Is there such a thing as love at first sight?- iWONDER

We judge people in a snapshot – and those first impressions are powerful but misleading. If you are looking for love, here are the most important things to bear in mind.

The science of first impressions is complicated, influenced by things outside of our control, neurological processes we don’t understand and inaccurate stereotypes. But if we can better understand what is going on, we might stand a chance of finding the one.

There is evidence that we are able to make an assessment of someone’s attractiveness in the blink of an eye, but it doesn’t necessarily mean that those assessments are accurate. By discounting some people in an instant we might also be missing out on far more suitable suitors.

Our environment, personalities and the emotions of the people we meet all contribute to the likelihood that we hit it off. So what is going on when we make a good romantic first impression? And how might apps have changed modern dating?

It takes less than 1/10th of a second to form an assessment of someone’s face. These first impressions predict all kinds of important characteristics, not just attractiveness. For example, people’s snap judgements of a politician’s competence, based solely on their appearance, can predict their success in an election – even when the audience has no knowledge of who the politician is. These impressions we make in a split second are not random; they tend to be shared by the majority of the people surveyed. But it doesn’t necessarily make them correct.

“A first impression could be misleading,” says professor Alexander Todorov, author of Face Value: The Irresistible Influence of First Impressions and an academic at Princeton University. “Trying to figure out what a person is like from a simple exposure is basically ridiculous. We only make first impressions about strangers. So naturally they are superficial.”

Whether our predictions are accurate or not, we make them quickly and we stick to them. Even if we are given more time than 1/10th of a second to judge the attractiveness of a face, we are unlikely to arrive at a different conclusion.

And in this snapshot, we make an assessment of a lot of different characteristics. There are three universal qualities that people infer from a face: attractiveness, trustworthiness and dominance. Evolutionarily, this makes sense. Attractiveness is a mating cue, trustworthiness implies useful social characteristics, like being able to care for children, and assessing dominance is useful to avoid conflict. 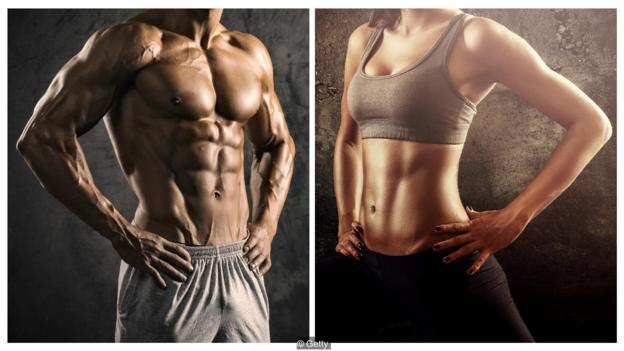 We judge how attractive someone is within 1/10th of a second (Credit: Getty)

“Qualities like dominance are closely linked to masculinity,” says Professor Todorov. “In these first impressions, men and women are not judged equally. Women who appear masculine are evaluated negatively whereas men would be evaluated positively. This applies to both genders, so men and women [both] make negative assessments of masculine-looking women.”

First impressions of faces are superficial, general and can be inaccurate. If we think about this in the context of dating apps we also have to factor in the effects of how a photo is taken. A lot of research on faces will use composite photos. These photos are computer-generated "averages", mixing together a lot of components from real faces and usually presented like a passport photo. Hardly the sorts of faces we might see when browsing people’s dating profiles.

All of your hard work to curate the perfect gallery of photos might be in vain
In any case, the photos we choose to publish on dating profiles are heavily curated to present ourselves in the best light. Not just chosen for attractiveness, they are also there to reflect personality and social cues, like adventurousness or generosity. People often use photos of themselves doing charity work, for example.

However, all of your hard work to curate the perfect gallery of photos might be in vain just because of who else you appear alongside. This is called a sequence effect. In dating apps, it is a case of love at second sight. When asked to rate the attractiveness of potential partners, if the preceding face was attractive you are more likely to rate the next face as attractive and vice versa. Therefore, we might discount attractive people because they came after an unattractive face, or if the following person was also attractive, we overvalue that second person’s attractiveness because of the sequence effect. (Read more about why this means you don’t really have a “type”). 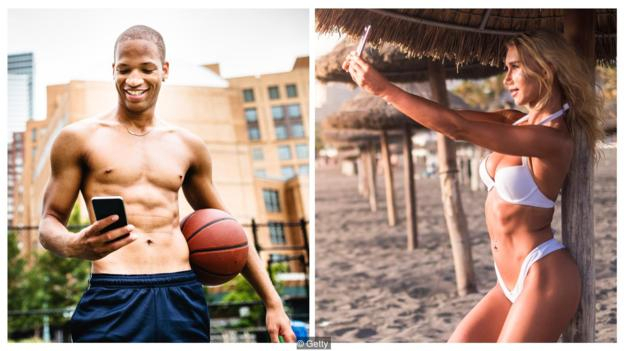 The position of the camera can have a huge impact on our selfies. A low angle makes us appear more dominant, which is considered more attractive for men (Credit: Getty)

First impressions are rapid but shallow and mutable if you have better information, like when your date starts speaking. “The only way to tell whether two people will really like each other – they have to talk. People don’t make good predictions for compatibility without talking,” says Professor Todorov.

In a study of the language we use when speaking to potential dates online, researchers categorised all the conversational strategies we might use to assess which led to a second date. From the opening line all the way up to when they planned to meet for a first date, they gathered messages and then followed up with the couples to see if they would go for a second date.

“We didn’t find any differences based on the first pick-up line – most people use something fairly innocuous like ‘Hey’, but their choice did not make a difference to the final outcome,” says assistant professor Liesel Sharabi from West Virginia University. “People have low response rates. So it makes sense that if your message might not get a response then you might not commit to a personal message.

“The traditional dating script is that men approach women and we largely found that it was men who approach women online, too,” says Sharabi. “But the most interesting part is how few gender differences there were in the types of strategy used. Men and women are more similar than they are different. And the few differences might be explained by people conforming to gender expectations, rather than the effectiveness of their strategies.” 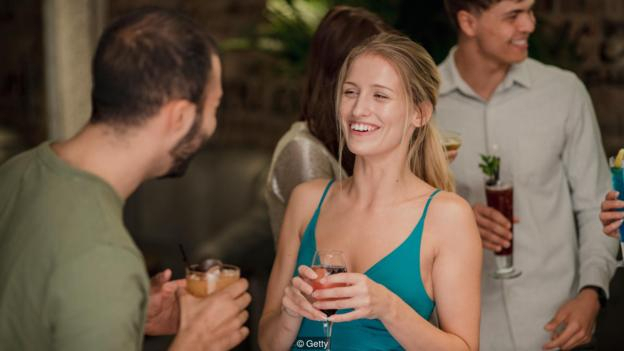 Talking about your partner preferences is apparently the best way to land a second date (Credit: Getty)

“Something that is unique about online dating is that you have a longer time to figure out if your date is going to meet your expectations,” says Sharabi. “Sometimes with online dating you have a tendency to build people up in your head which can lead to disappointment. We can idealise people when we don’t have a lot of information to go on.”

The desirability of the people whom we can contact through dating apps and our own interpretations of self-worth predict who we ask on dates. We tend to match with people whom we deem equal in self-worth, physical attractiveness and popularity. Again, this is a common strategy for both men and women. People who value their self-worth highly might be more likely to choose other people with high self-worth because they are more optimistic about a successful outcome.

This is called the hot-cold empathy gap and affects not just our abilities to talk about attraction. People tend to anticipate their decisions in a cold state in a rational way. But then when they are in the situation they are influenced by their emotions. In reality, you might be attracted to someone who doesn’t meet your predefined criteria once you meet face to face. 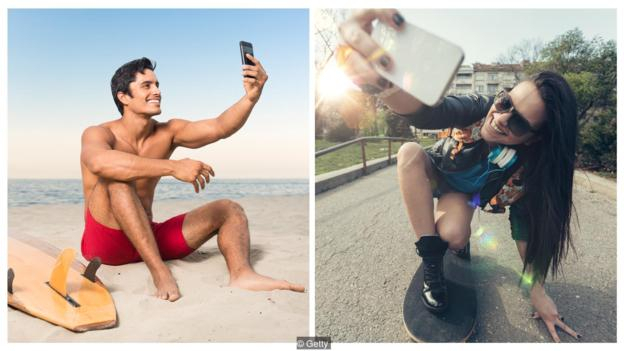 We tend to match with people whom we deem equal in self-worth, physical attractiveness and popularity (Credit: Getty)

Speed-dating is a particularly useful way to explore dating behaviours because it represents a realistic way that we interact with potential new partners. “There are a lot of situations in everyday life where we meet potential partners in a quick way,” says Karen Wu from California State University, Los Angeles. “You might meet someone at a bar, a meeting, in passing. People don’t always take an hour to meet someone new.”

In a speed-dating scenario, if daters were feeling happy after one encounter they were less likely to choose the next interaction partner as a potential match at the end of the evening. This is called a contrast effect, where we have the opposite reaction to how we are feeling.

Men are more affected by contrast affects. But this can’t be explained by a desire specifically for the previous person. Being in a positive mood at the beginning of the evening had the same effect. So, it is not only the emotion that is caused by meeting the previous partner that turns you off to subsequent people; your general mood state has an effect too.

If men feel negative they attribute this to their interaction partner – Laura Sels
“Generally, the more positive someone is the more open they are and the more they judge that other people are in line with their mood,” says Laura Sels from KU Leuven in Belgium. “If they feel negative they are more critical. So, you would expect that feeling positive will make you happier when you meet someone new. But what we’ve seen is that people use their emotion as a reference point for comparison. If they are feeling positive, their opinion of a potential partner is contrasted against that emotion, meaning they are judged more poorly. Men seem to be more affected by negative moods.”

The importance that we put on certain character traits is also culturally dependent. “In the West people are attracted to narcissists,” says Wu. “People in the West look for extroversion and high self-confidence. Narcissists are also better at grooming themselves so they are better looking because of that. I felt I didn’t relate to this phenomenon – that someone has to be confident to be a good candidate.” 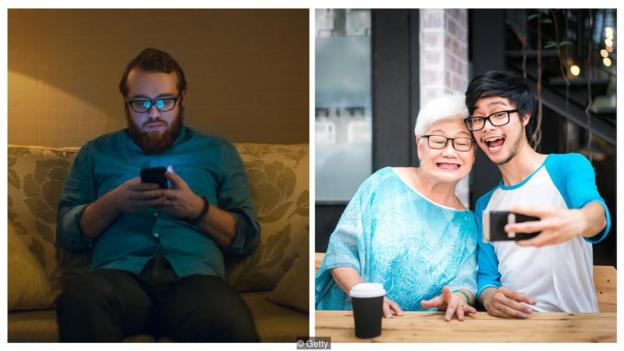 Westerners tend to be attracted to individualists, but this preference doesn't seem to be shared by people in East Asia, where traits like kindness are valued more (Credit: Getty)

Characteristics like kindness predict speed-dating success in Asian-Americans. However, for both men and women, the most important factor was still physical attractiveness.

Considering this, it is a miracle that we ever find someone who is as attracted to us as we are to them. The conversation your potential partner had directly before meeting you, their general mood, their cultural background, the angle at which they are looking at you, whether they deem themselves to be more popular than you - all these factors could influence whether you hit it off seems endless.

Having said that, there have been several marriages from these speed-dating studies, so there must be some logic in there, says Sels: “Some people now have children so it produced some nice results.”