US ambassador: I am very pleased that parties of Karabakh conflict remain engaged 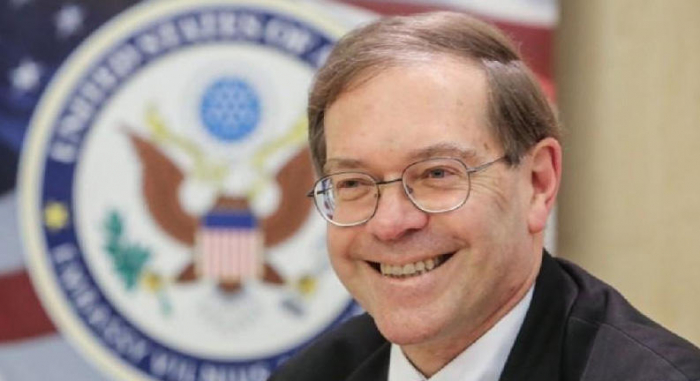 US ambassador to Azerbaijan Earle (Lee) Litzenberger has said he is very pleased that the parties of the Nagorno-Karabakh conflict remain engaged, AzVision.az reports.

“I am very pleased that the parties remain engaged, that there will be another meeting. That is what the co-chairs are hoping to do is to help provide the environment, space and support for the parties to come together and work through and talk through a very difficult issues that divide them right now. Obviously, the goal is to see peace. That is a message that transcends borders and nations. It is a human message,” the ambassador told reporters.

Further, Litzenberger spoke about the priorities as the US ambassador to Azerbaijan.

“I hope to accomplish a number of things all related to strengthening the already very strong bilateral relationship between the US and Azerbaijan. One goal I have is to do everything I can to increase the opportunities for our two countries and peoples to exchange, to meet each other, so learn about each other and the cultures and one of the things I hope to do is expand the access to English language education here in Azerbaijan,” he concluded.


More about: Azerbaijan   Armenia   US