Another Armenian provocation prevented at int'l event in Qatar 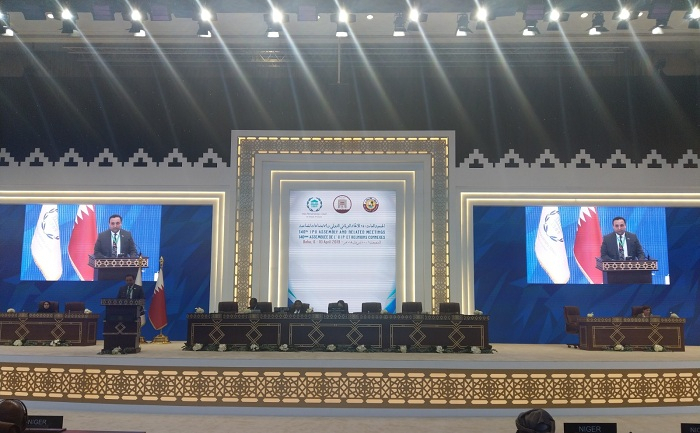 The Azerbaijani delegation consisting of MPs Shahin Ismayilov, Kamran Bayramov and Sona Aliyeva participated in the 140th Assembly of the Inter-Parliamentary Union in Doha on April 6-10, AzVision.az reports referring to the parliament’s press-service on April 11.

Over 2,200 representatives from more than 150 countries attended the event. This year “Parliaments as platforms to enhance education for peace, security and the rule of law” was the main issue on the agenda.

During the forum in Qatar, gratitude was expressed to the Azerbaijani side for organizing this high-level conference.

During the meeting of the Standing Committee on Peace and International Security of the Inter-Parliamentary Union, a draft resolution on “Non-admissibility of using mercenaries and foreign fighters as a means of undermining peace, and international security, the territorial integrity of states and violating human rights” was submitted for discussion.

More than 120 proposals submitted by 20 countries regarding this document prepared by co-rapporteurs Khaled Albakkar and Boris Tarasyuk were discussed.


Azerbaijani MP Kamran Bayramov spoke about the essence of the changes proposed on behalf of the Azerbaijani delegation to the draft resolution and about the legislative acts and measures being taken in this sphere in Azerbaijan.

The changes were put to the vote and were unanimously adopted despite the protests of the Armenian side.

During the Assembly of the Inter-Parliamentary Union, the Armenian delegation put forward nine proposals envisaging the deletion of the phrase “territorial integrity” from the text of the draft resolution and the addition of the words “the right to self-determination of peoples”.

During the discussion of these proposals, the Azerbaijani delegation protested and justified it by the fact that these proposals are unacceptable and defy any logic, as well as insisted on their rejection. As a result of voting, the proposals put forward by the Armenian MPs were not accepted. On the contrary, it was considered appropriate to add the words “territorial integrity” to the draft resolution.

Along with the delegation consisting of MPs, Azerbaijani Extraordinary and Plenipotentiary Ambassador to Qatar Rashad Ismayilov also participated in the work of the Assembly of the Inter-Parliamentary Union.