How India was mistreated during colonial rule- iWONDER 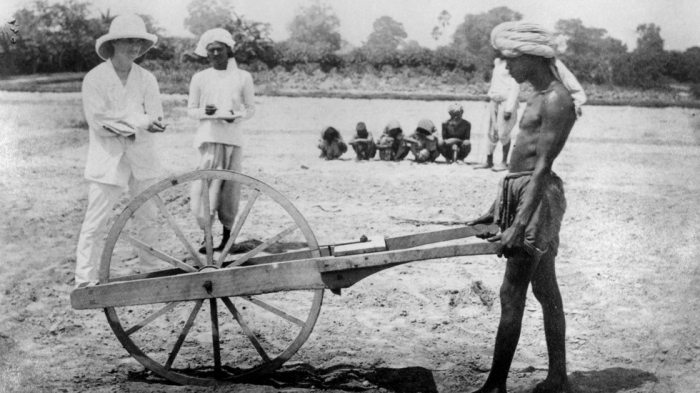 From the East India Company to the Raj, India was a British colony until the mid-20th century. And despite nostalgic imperialists extolling the virtues of the empire's rule, it left behind millions of victims.

The 1919 Amritsar massacre, the grim anniversary of which India marked on Saturday, is one of the best-known examples of the atrocities committed by the British during their two-century colonial rule of India. But, numerically, its total of 1,600 victims looks like a small blot among the millions of deaths India suffered during the empire's prolonged misrule and exploitation. 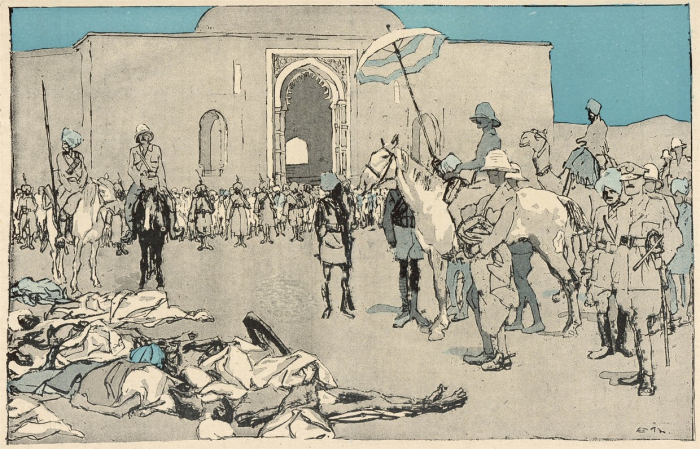 From the 18th to the 20th century, various parts of India endured over a dozen devastating famines, which killed tens of millions of people, most of the events exacerbated, if not outright caused, by the colonial administration.

The East India Company (EIC), merchants with their own army who ruled India on behalf of the British crown, were ruthlessly effective in generating exports and profits from the colonized land – ruthlessness being a key part of the efficiency. Exports of Indian produce – rice, tea, wheat, and even, illegally, opium – were a vital boost for the British economy, helping keep food prices low at home and generating income from sales to other nations, like China. 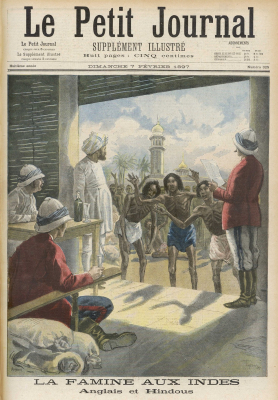 The EIC did not hesitate to decrease the areas for food crops and even destroy food plants to make room for other crops needed for export, including opium poppies. Many scholars agree that in a lot of the cases, famine would have come anyway, considering the poor rainfall and underdeveloped transportation, among other things – but it was made that much worse by the Brits, who exploited agriculture while failing to offset its troubles with proper investment.

The British response to famine was often inaction, at least until their troops were affected, like in Orissa in 1865, where a third of the regional population died before aid was finally sent in. As the Great Famine of 1876-78 struck Madras and Bombay, the British administration thought the free market would sort it out and government interference would only hurt in the long run. It took 5.5 million deaths for the Brits to begin relief work. At the turn of the century, the British Viceroy cut rations (saying famine relief was "philanthropy" and "complacency"), which resulted in another million deaths.

The most recent and infamous is the Bengal Famine of 1943-44, when 1.5 million people starved to death and another 2.1 million are estimated to have died from related causes.

Until recently, the Bengal Famine was attributed to the sheer ineptitude of the British administration, which could not be bothered to divert attention and resources from the war effort. But the 2010 book 'Churchill's Secret War' lays the blame directly at the feet of then-prime minister Winston Churchill and his "racism." Citing unearthed documents, author Madhusree Mukerjee says Churchill not only refused to divert supplies from British troops, but blocked Canada and the US from delivering aid, and even forbade India from tapping into its own currency reserves to buy food abroad.

It would be wrong to fail to recognize the brutality of the Indian mutineers who rose up in 1857 – it was the Indians who started the killing, after all, and the victims on the British side numbered in the thousands. It would be equally wrong to fail to acknowledge what drove them to revolt, or how disproportionate in both scale and brutality the British response was.

The rebellion kicked off in May 1857 over what might seem a trifle: the Brits had introduced to the Indian troops (sepoys, as they were called at the time) new breech-loading Enfield rifles, the paper-wrapped cartridges of which had to be bitten off at one end to prepare for firing. Those cartridges, according to a rumor spread among Indian soldiers, were lubricated with pig and cow lard – making oral contact with them anathema to both Muslims and Hindus. 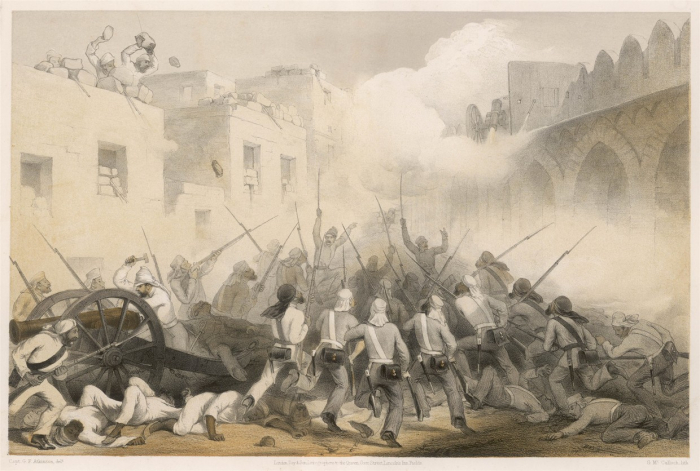 This minute detail, which was never even proven to be true, capped off a mountain of very real grievances between the British Raj and the Indian population. So, when soldiers in Meerut, Bengal refused to take the offending Enfield cartridges and were subsequently sentenced to long prison terms, then freed by their comrades, who shot their British officers and marched on Delhi – the entire thing quickly spiraled from a soldiers' mutiny into a popular rebellion.

As the rebels sought to restore pre-British Mughal rule, the uprising soon engulfed the north of the country, its first stages marked by massacres of British civilians, soldiers, and loyal Indian troops. Estimates of British deaths range from 6,000 to 40,000, with historical accounts speaking of murders of women and children, rape, and torture.

However, as the Brits got their feet under them, and were reinforced from home, they started to respond in kind. Word of the rebels' atrocities spread through the British papers, and the soldiers were seen not as conquerors anymore, but as bringers of vengeance for innocent lives.

No response was deemed disproportionate – and an estimated 800,000 Indians died in the quelling and its aftermath. Brits perpetrated massacres as they recaptured Delhi and other cities. Sepoys were bayoneted, tortured, and tied to cannon muzzles to be shot point-blank. But illustrations of that are scarce among those depicting British soldiers as heroic liberators.

After the rebellion, the rule over India was transferred from the EIC to the crown, under what is known as the British Raj – until the partitioning and independence of 1947.

The same ruling that brought India independence also resulted in one of, if not the worst instances of mass migration in history, a division of enormous territories along religious lines and a scar on both the land and the collective consciousness of two peoples – as well as over a million deaths and thousands of stories of atrocities and hardship which could have been avoided with better planning on the part of the retreating Brits. 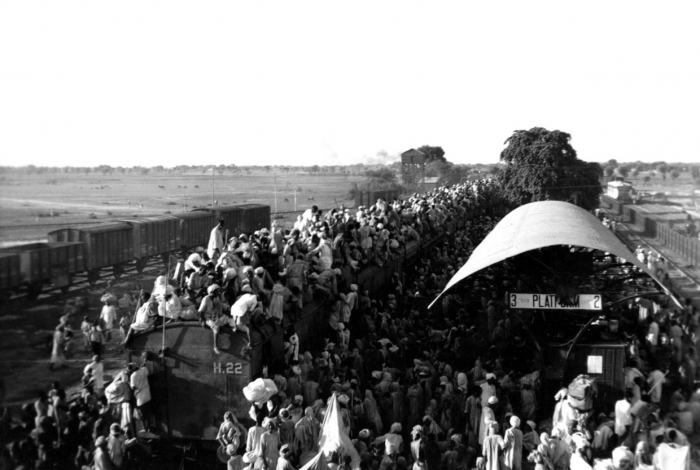 Refugees cram the coaches of a train, the buffers and the roof as they prepare to leave the New Delhi area for Pakistan, 1947. © Global Look Press / imago stock&people

The British government decided to cede power to Indian leadership in 1946, but the initial plan was to keep the country whole – merely designating grouped provinces as majority Muslim and majority Hindu, to accommodate the deepening split between the country's two major religious groups, represented by the two largest political parties – the Muslim League and the Indian National Congress.

That plan came crashing down when in August communal tensions boiled over into what is now known as the Great Calcutta Killings. The Muslim League staged a Direct Action Day, ostensibly a peaceful protest to demand a separate homeland for Muslims, which spiraled into a massacre of an estimated 4,000 people over the span of days.

The British plan was then altered and accelerated – India would be split, Pakistan would be created, and independence would come several months earlier. The sometimes-voiced trope that the fate of the partition was decided over a single lunch is a bit of an embellishment – but several weeks of planning hardly proved a better time frame. 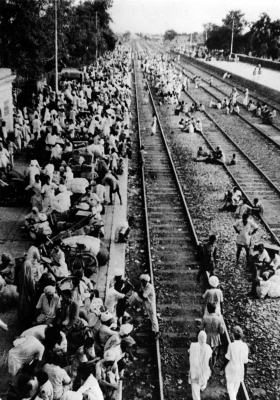 Refugees from small villages throng platform and railway lines as they await their trains to take them out of Pakistan and into India, 1947. © Global Look Press / imago stock&people

The partition plan, with the border slashing through the mixed Hindu-Muslim regions of Punjab and Bengal, was presented in June 1947 by the last British viceroy, Louis Mountbatten, who did not see the need to organize an orderly transfer of populations, believing local authorities would sort it out as needed.

What resulted was the uprooting of 15 million people and the deaths of over a million. Let loose by the officially announced religious divide, yesterday's neighbors began killing each other and taking away each other's homes and livelihoods, settling old feuds with blood and perpetrating localized ethnic cleansing. Afraid of becoming minorities in what used to be their own land, people fled in both directions across the border, as well as out of the regions altogether. Punjab and Bengal, as well as Sindh, Uttar Pradesh, and Kashmir (a disputed flashpoint to this day) were among the worst affected areas.

Survivors' accounts, refreshed by the recent 70th anniversary of the partition, tell of torched houses, viciously slaughtered locals, frantic flights in caravans that were attacked and looted, women abducted and raped. Over 5,000 such accounts have been collected by one online resource, complete with a map that shows the mind-boggling scale of the displacement.

British imperialists argue that in the end, India is better off, pointing to the staples of progress colonial rule brought in. But whether or not railroads, education, and cricket were worth two centuries of ruthless economic exploitation, cultural suppression, and millions of lives, is a question few are prepared to ask without flinching.