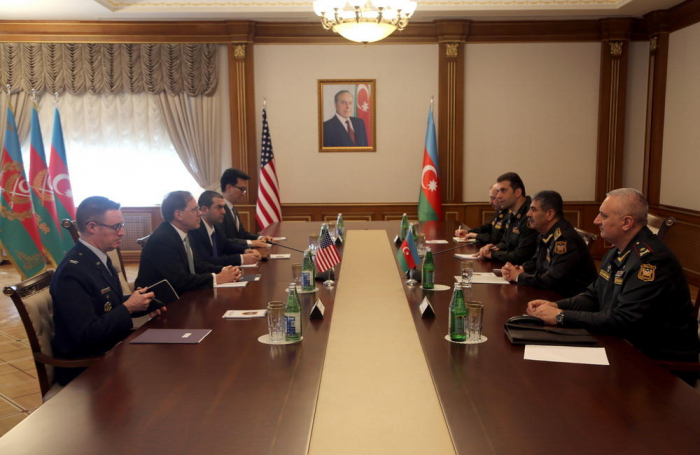 Congratulating Litzenberger on his appointment, the defense minister expressed confidence in further expansion of Azerbaijan-U.S. relations during the new ambassador’s tenure.

Minister Hasanov noted that relations between Azerbaijan and the U.S. are built within the framework of NATO programs and on a bilateral basis. He also stressed the importance of developing cooperation between the two countries in the military, military-technical and military-educational fields.

Touching upon the military-political situation in the region, Minister Hasanov emphasized that Armenia still continues its aggressive policy despite the efforts of the OSCE Minsk Group co-chairs to settle the Armenia-Azerbaijan Nagorno-Karabakh conflict. He noted that Yerevan continues to deliberately delay the peace negotiations.

The Azerbaijani minister noted that although some leading states and international organizations in some cases put pressure on the conflicting sides, they apply double standards to the Nagorno-Karabakh conflict.

Litzenberger, in turn, expressed satisfaction with his appointment as the U.S. ambassador to Azerbaijan, pledging every effort to development relations between the two countries.

Retreating the U.S. recognition of Azerbaijan’s territorial integrity, the diplomat noted that his country supports a peaceful solution to the Nagorno-Karabakh conflict, which is also important for the development and security in the South Caucasus.

Hailing the strategic importance of cooperation between the U.S. and Azerbaijan, Litzenberger said he is following the reforms implemented in the Azerbaijani army and welcomes the successes achieved in this area.

The U.S. envoy also expressed satisfaction with the participation of Azerbaijani peacekeepers in the mission in Afghanistan.

The sides then discussed various aspects of regional and bilateral cooperation, the security of the Caspian Sea and important strategic infrastructures, the fight against the proliferation of weapons of mass destruction, the organization of mutual visits of specialists in military education, as well as a number of issues of mutual interest.