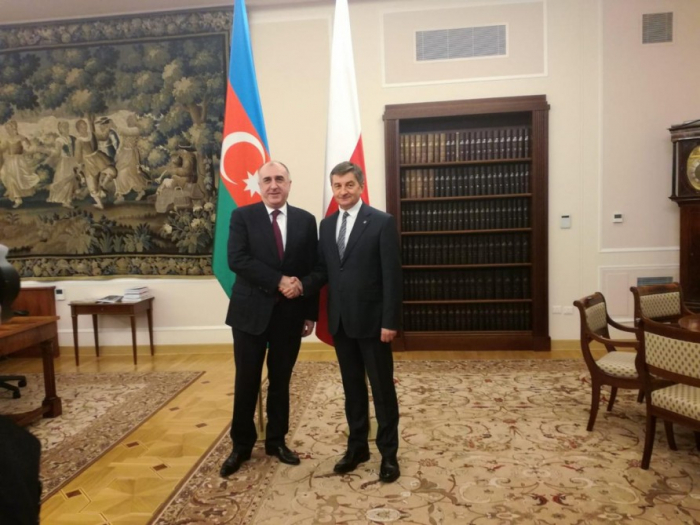 As part of his official visit to the Republic of Poland, Azerbaijan’s Minister of Foreign Affairs Elmar Mammadyarov has met with the Marshal (Speaker) of the country’s Sejm Marek Kuchciński.

Marshal of the Sejm Marek Kuchciński recalled the Azerbaijani FM’s official visit to Poland in April 2017. He stressed that these visits give an impetus to further development of mutually beneficial cooperation between Poland and Azerbaijan. Hailing the importance of the inter-parliamentary cooperation between the two states, the Marshal of the Sejm noted the activity of the parliamentary friendship groups in both of the states and underlined the necessity of holding regular meetings of these groups for improving the current relations.

Minister Elmar Mammadyarov expressed his satisfaction with the existing cooperation between the two countries, including the current state of inter-parliamentary relations. The Minister conveyed the sincere greetings of the Speaker of the Azerbaijani Parliament to Marek Kuchciński. Elmar Mammadyarov briefed the Marshal of the Sejm on energy and infrastructure projects initiated by and realized with participation of Azerbaijan, including the Southern Gas Corridor, as well as the South-West transport corridor.

The sides exchanged views on participation in the EU’s Eastern Partnership program. Minister Elmar Mammadyarov noted that Poland is one of the key partner countries for Azerbaijan among the EU member states.

Pointing to the importance of the EaP, the Marshal of the Sejm stressed the significance of expanding cooperation in various fields within the Euronest Parliamentary Assembly.

Minister Elmar Mammadyarov informed the Marshal of the Sejm about the current state of the negotiation process on the settlement of the Armenia-Azerbaijan Nagorno-Karabakh conflict, which is a serious threat to peace and security in the region. He stressed the importance of the soonest settlement of the conflict in terms of ensuring peace, sustainable development and prosperity in the region.