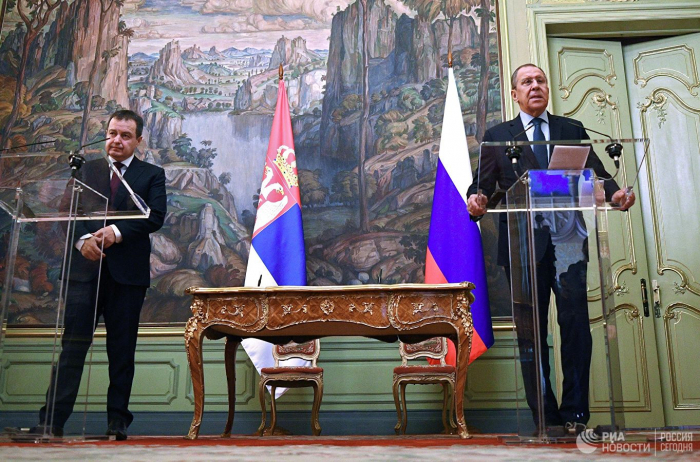 Both Baku and Yerevan are interested in the recent agreements on the Armenia-Azerbaijan Nagorno-Karabakh conflict not to remain on paper, Russian Foreign Minister Sergey Lavrov said.

Lavrov made the remarks at the press-conference, Azvision.az reports on April 17.

"We held a meeting between the Azerbaijani and Armenian foreign ministers here,” Lavrov said. “I also participated in the meeting and later three OSCE Minsk Group co-chairs and the personal representative of the OSCE chairperson-in-office joined us.”

“If I understand correctly, following this meeting in one of his interviews Azerbaijani Foreign Minister Elmar Mammadyarov mentioned that the proposals of 2016 were discussed,” he added. “Therefore, I have nothing to add here. As for the essence of these proposals, they are in line with the approaches enshrined in numerous statements made by the heads of the co-chair countries, namely, Russia, France and the US."

As for the humanitarian measures, Lavrov stressed that they have been also clearly outlined in a joint statement, which was published following this meeting.

“They [humanitarian measures] cover the need for the parties and consent of the parties to make additional efforts to stabilize the situation, especially during the period of agricultural work,” Lavrov said. “They include an agreement to assist the individuals to meet with their relatives and friends who are held in places of detention. They cover approval of the contacts between people, especially between media representatives.”

“I think that this is a very useful agreement,” he said. “Following the meeting in Moscow, I have reason to think that Baku and Yerevan are interested in these agreements not to remain on paper this time. We will help in this issue.”

Russian, Azerbaijani and Armenian Foreign Ministers Sergey Lavrov, Elmar Mammadyarov and Zohrab Mnatsakanyan held a working meeting in Moscow upon the initiative of the Russian side on April 15.

OSCE Minsk Group’s co-chairs (Igor Popov of Russia, Andrew Schofer of the US and Stéphane Visconti of France), as well as Personal Representative of the OSCE Chairperson-in-Office Andrzej Kasprzyk also joined them.

"In continuation of the agreements reached by Azerbaijani President Ilham Aliyev and Armenian Prime Minister Nikol Pashinyan at the summit in Vienna on March 29, 2019, the participants of the meeting discussed the situation on the border and the line of contact, as well as prospects for establishing humanitarian cooperation,” the statement said. “They also exchanged the detailed views on key aspects of the conflict settlement."

The Azerbaijani and Armenian foreign ministers confirmed the parties' intention to continue efforts to resolve the Nagorno-Karabakh conflict through political and diplomatic means.

"The ministers stressed interest in further stabilization of the situation in the conflict zone, particularly during agricultural work,” the document said. “They also agreed to take measures on a reciprocal basis to allow families to meet with their relatives held in custody in the corresponding detention centers of the parties. The ministers expressed willingness to launch certain work to establish contacts between people through mutual visits of media representatives as well."

The Russian foreign minister and the OSCE Minsk Group co-chairs reiterated commitment to a mediation mission aimed at achieving sustainable peace in the region, the statement said.

The participants of the meeting agreed to continue contacts.