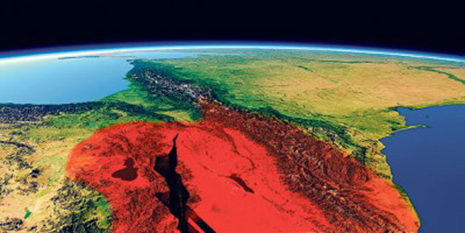 Geopolitical rivalry between the large powers of the world is being supplemented with the new content. So far, it has been more pronounced in the Middle East.
Nevertheless, the sequence of events indicates that acute processes are also developing around the Central Asia and the Middle East. Analysts and experts talk about the geopolitical plans, and there are some facts to substantiate the accuracy of the claims. It may be interesting to reflect upon the regional geopolitical situation in light of those developments.

New conditions of the regional security

It is not unexpected. Escalating tension in the Middle East, ongoing financial crisis in Europe, issue of Iran remaining high on the agenda and the unresolved conflicts in the South Caucasus lead to a thought-provoking situation. While renewed efforts of the large powers in connection with the region only attest to the emergence of a new situation. In this regard, an agreement reached between Iran and China evokes keen interest. During his visit to China, Iran`s Minister of Interior Mostafa Mohammad-Najjar and China`s Public Security Minister Guo Shengkun agreed to cooperate in the security area that experts believe would involve Eurasian space.

Both countries have demonstrated a keen interest in bolstering military and technical cooperation. In the wake of the latest geopolitical events in the Middle East, joint activity plans between Iran and China are justified. However, the issue is not limited to common interest domain of the two countries as they have the potential to affect the geopolitical processes in the Central Asia, Caspian basin and the South Caucasus. Therefore, along with other aspects the signed security agreement may affect the geopolitical landscape in the South Caucasus.

One point deserves an emphasis here. Geopolitically, both Iran and China are Russia`s allies. However, their positions do not necessarily concur on all the issues in the South Caucasus. Moscow at times has to confront Tehran and Beijing to retain its traditional influence over the region, especially troubled by the possibility of the growth of importance of the Muslim Iran in the region. Reportedly, Iran has Tajikistan to abandon Russia`s sphere of influence pledging security guarantees in exchange (see: Игорь Мурадян. ``Новая Игра в Евразии`` (New games in Eurasia) // www.lragir.am, 6 July 2013). Russia is on guard against the religious radicalism that may inspire separatist sentiments in the country. So far Moscow has managed to contain Iran`s activity in this direction. It should be added that Tehran was offended by the Kremlin`s refusal to sell S-300 missile systems to Iran.

Thus, certain differences persist in Russia-Iran relations in the South Caucasus. Cooperation between the countries is implemented within the Shanghai Cooperation Organization where hidden rivalry for influence is well underway. In this context, leadership aspirations appear in the Central Asia and the South Caucasus. Russia takes into account the possibility of being forced out of its traditional areas of influence owing to China`s financial and economic might. Given all that, Kremlin will closely monitor the process of security cooperation between Beijing and Tehran.

Experts conclude that the course of events may lead to a new geopolitical formation, although such a conclusion appears a bit premature. However, there are no reasons to exclude the possibility of such a scenario. Moreover, influence of other large powers in growing in the South Caucasus. In this context, there is a need to address aspects.

First and foremost, developments in Turkey are sending ripples throughout the region. Armenia views it as a rising opportunity and therefore, Yerevan attempts to maneuver between the West, Russia and Iran, aiming to solve some of its problems. Armenian experts frequently raise such questions as ``Who will guarantee Armenia`s security?`` (See: Сирануш Папян. ``Армения должна задавать вопросы – России, США, Европе`` (Armenia must ask questions to Russia, U.S., Europe) // www.lragir.am, 6 July, 2013), although it does not imply the existence of concrete geopolitical position on Armenia`s part. Local experts acknowledge that official Yerevan displays ``uncertain geopolitical standpoint`` (see: Сусанна Петросян. ``Нечеткость геополитических ориентиров Армении`` (Vagueness of Armenia`s geopolitical orientation) // ``Вестник Кавказа``, 8 July 2013). In reality, Armenia is trying to boost its prominence in the eyes of Russia, U.S., and Europe, a position that holds profound geopolitical risks for the South Caucasus. Manipulation of the interests of the large powers has always been a dangerous game.

Let us view the processes within Russia-U.S.-Iran triangle. Moscow and Tehran have both reproached Kazakhstan as they eye specific strategic motives in the use of the Kazakhstani seaport of Aktau for withdrawal of U.S. troops from Afghanistan towards the South Caucasus. Investigative journalist Joshua Kucera, a specialist on the Central Asia, Caucasus and the Middle East, believes that Russia may lose its trust towards Kazakhstan (see: ``Россия и Иран проведут совместные военно-морские учения`` (Russia and Iran are due to hold joint naval exercises) // ``Eurasianet``, 3 July 2013). The very aspect must underlie the agreement to conduct such exercises. The current course of developments may entail new scale of geopolitical confrontations in the South Caucasus that may lead to the emergence of Russia-China-Iran ``triangle``.

On the backdrop of the aforementioned, the impact of the developments in Turkey upon the South Caucasus is thought-provoking. Namely, certain quarters may seek to take advantage and upset the regional balance, a trend detrimental for the South Caucasus. Unresolved conflicts and intensified search for a new patron by Armenia are likely to generate significant risks.

Apparently, in the current stage a great deal will depend on Georgia`s geopolitical choice. Official Tbilisi had reemphasized its intentions to bolster relations with Russia. In an interview with Germany`s ``Deutsche Welle`` radio station Prime Minister Bidzina Ivanishvili said his country was interested in deepening cooperation with Moscow. In the meantime, Armenia may deny the West in exchange for greater guarantees from Russia. Some Armenian experts are already speaking about the benefits of cooperation with Russia.

Finally, impact of the events in the Middle East upon the South Caucasus must not be dismissed. It is about the extent and a framework of geopolitical configuration. Therefore, many things will depend on the nature of rivalry between the U.S., Russia, Turkey, Iran and China.