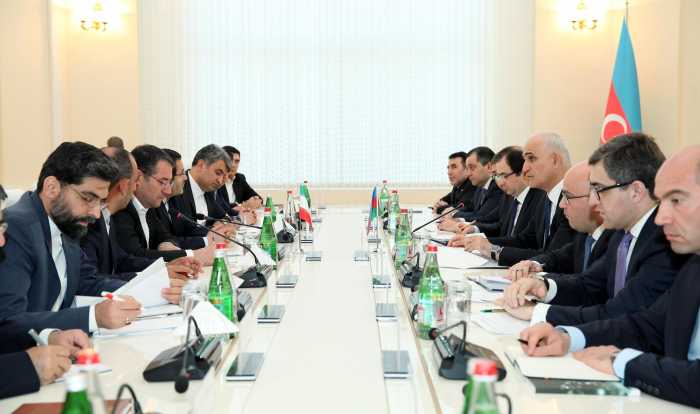 He made the remarks during a meeting with a delegation led by Iran’s Minister of Industry, Mine and Trade Reza Rahmani. As Shahin Mustafayev informed, within joint Azerbaijani-Iranian projects, a car plant is successfully operating in the Neftchala Industrial Park. Last year, over 1,000 cars were produced and sold, and 360 cars were produced and sold in the first quarter this year, he added.

At the meeting, it was reported that a joint pharmaceutical plant to be built in the Pirallahi Industrial Park and the foundation for a bus production plant would be laid in the Hajigabul Industrial Park.

Mustafayev emphasized that last year the trade turnover between Azerbaijan and Iran increased by 74 percent and added that this year the growth trend continues. “In January-February 2019, the trade turnover increased by 4.5 times, compared to the same period last year,” he said. In his words, the bilateral relations are developing in many areas including, among others, energy, industry, agriculture, transport, cargo transportation, trade, water management and humanitarian sphere.

In his turn, Rahmani pointed out that the negotiations held at the meeting with Azerbaijani President Ilham Aliyev would play an important role in the further expansion of bilateral relations. In recent years, Iranian-Azerbaijani relations continued to develop and reached a high level, Iranian minister said.

Rahmani continued by adding that the presidents of both countries attach great importance to the development of Iranian-Azerbaijani relations and created favorable conditions for expanding the economic partnership and political relationship. In his words, Iran provides advantageous conditions for entrepreneurs and Azerbaijani businessmen can use these opportunities.

The meeting participants exchanged views on expanding cooperation in the industrial, agricultural, trade sectors and in the field of small and medium-sized enterprises, and discussed prospects of other joint projects.