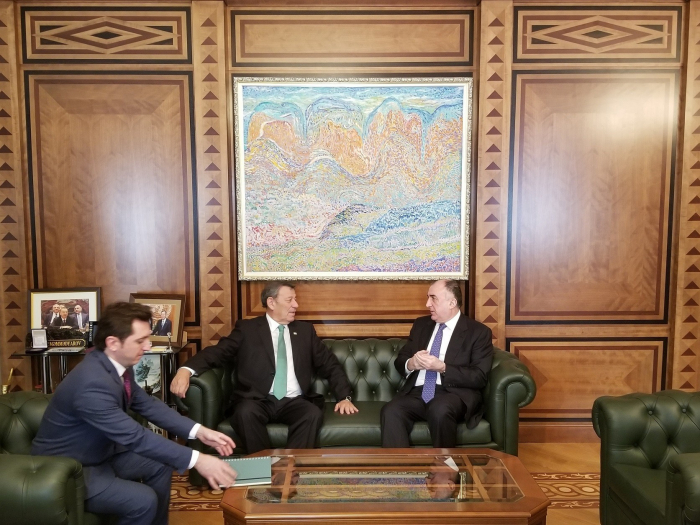 Azerbaijani Foreign Minister Elmar Mammadyarov met with his Uruguayan counterpart Rodolfo Nin Novoa, who is on his official visit to Azerbaijan.

After the tête-à-tête meeting of the ministers, the negotiations continued with participation of delegations, the Azerbaijani Foreign Ministry told AzVision.az.

The sides noted favorable opportunities for the development of cooperation between the two countries in political, economic and humanitarian spheres.

Minister Mammadyarov warmly welcomed his Uruguayan counterpart and appreciated his official visit to Azerbaijan. He also noted that currently the stage of expansion of relations between Azerbaijan and Uruguay is observed.

Rodolfo Nin Novoa noted his satisfaction for being received by the President of the Republic of Azerbaijan Mr. Ilham Aliyev and to be attending the V World Forum on Intercultural Dialogue in Baku. He emphasized the importance of good relations between nations and stated that Uruguay had been steadfast in this position for over 200 years, continuously respecting the sovereignty and territorial integrity of the countries worldwide.

The Uruguayan minister named Azerbaijan as a friendly country, and emphasized that bilateral relations have a fairly broad economic agenda. For example, he recalled that the last year Azerbaijan was among the 5 largest oil exporters to Uruguay. Noting that his country is interested in developing cooperation with Azerbaijan in agriculture and other spheres, Rodolfo Nin Novoa noted that the treaty and legal basis of bilateral relations has been expanding.

Minister Mammadyarov expressed his gratitude to his counterpart for the principled position of Uruguay on the settlement of the Armenia-Azerbaijan Nagorno-Karabakh conflict. He underlined the importance of the resolution of the conflict in accordance with the norms and principles of international law, based on the related four resolutions adopted by the UN Security Council. In this regard, he expressed appreciation with the full consistency of the official position declared by Uruguay to this principled approach.

Touching upon the treaty and legal basis of bilateral relations, Minister Mammadyarov noted that a number of draft agreements, which create more favorable conditions for promotion of economic and humanitarian cooperation, are under consideration. In this context, "The Agreement on the Economic, Commercial and Technical Cooperation" between the Governments of Azerbaijan and Uruguay to be signed during the current visit of Rodolfo Nin Novoa has been underlined with great satisfaction.

Minister Mammadyarov also pointed out the importance of expanding inter-parliamentary contacts between Azerbaijan and Uruguay, noting that these relations are one of the key areas of mutually beneficial cooperation.

At the meeting, the sides exchanged views on a number of other issues in bilateral and multilateral agenda.