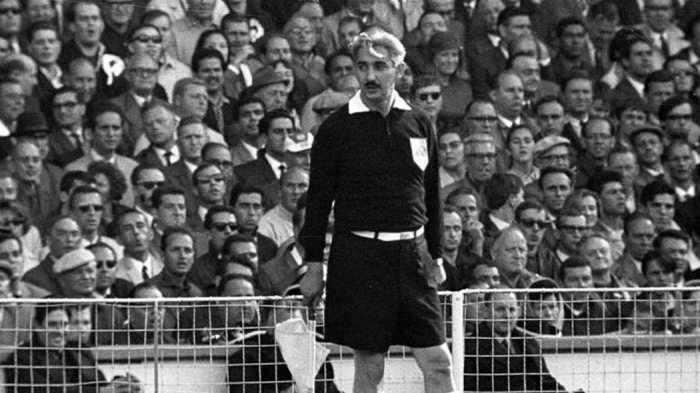 Arsenal and Chelsea fans, who have made the arduous trip to Baku for Wednesday’s Europa League final would be advised to jump in a taxi and make a quick pilgrimage across the city, AzVision.az reports citing The Sun.

If they do so, they can pay tribute to one of the most influential figures in English football history.

But in the Azerbaijani capital, the locals have immortalised in bronze the former referee Tofiq Bahramov.

Now Bahramov holds a special place in all English hearts – he was the linesman during the 1966 World Cup final victory over West Germany at Wembley.

More pertinently he was the man who gave the contentious Geoff Hurst goal for the Three Lions during that 4-2 triumph.

The score was locked at 2-2 but then, after 11 minutes of extra-time, Alan Ball’s cross found Hurst and the West Ham striker turned and fired the ball off the underside of the crossbar. At first glance, nobody was 100 per cent sure if the ball had gone in.

The Swiss referee Gottfried Dienst conferred with Bahramov, seeking confirmation about whether the ball had crossed the line.

And though it has generated debate for more than 50 years about whether it was over the line or not, Bahramov felt confident enough at the time to nod his head vigorously in spite of the language barrier to indicate it had been a goal.

In his memoirs, he claimed the movement of the net was evidence the ball really was over the line.

Newspapers headlines at the time referred to him as a “Russian linesman” but instead he hailed from Baku. Azerbaijan gained independence from the Soviet Union in 1991.

And in Baku, he remains a sporting icon. The former footballer, coach, referee and administrator devoted most of his life to football until his death in 1993 aged 68.

Bahramov, who fought in the Second World War, played for Spartak, Dinamo and Neftchi Baku until the 1950s before retiring with a serious leg injury.

He officiated for more than 20 years, refereeing in the 1966 and 1970 World Cups, the European championships and the first leg of the 1972 Uefa Cup final between Tottenham and Wolves at Molineux.

Upon retirement, he worked as secretary of the Football Federation of Azerbaijan.

It is believed he is the first, if not only, referee to have a stadium named after him. The Tofiq Bahramov national stadium - with a capacity of 31,200 - was renamed in 1993 having first been called the Joseph Stalin stadium and then the Vladimir Lenin stadium.

In October 2004 ahead of England’s visit there for a World Cup qualifier, there was a ceremony attended by Hurst, Michel Platini and Sepp Blatter, then the Fifa president, which unveiled a statue of Bahramov.

It shows the high esteem he is held in his home country. You wouldn’t expect someone like David Elleray, Mark Clattenburg or Mike Dean having a statue commissioned in their honour in the UK, would you?

His son Bahram once said: “Now that Azerbaijan is independent it’s very right for him to be remembered as a member of the Azeri nation. People like Tofiq Bahramov are only born once in a hundred years.”

After the World Cup final, Bahramov received a replica trophy, presented to him by the Queen.

Bahram said: “My father always maintained that he had made the correct decision. Of course, it was a very controversial goal, but he just kept his head and ruled it was a goal. The fact he refused to change his mind was very impressive.

“When England scored he was surrounded by the German players, who tried to put pressure on him. But he wouldn’t listen to them.

“After the game they watched a replay of the goal and the Germans accepted that the ball had crossed the line before bouncing back out.

“The German players realised he had made the right decision and they told him so. They even apologised for their protests. They told him: ‘We were wrong. It was a fair goal and you were right.’”