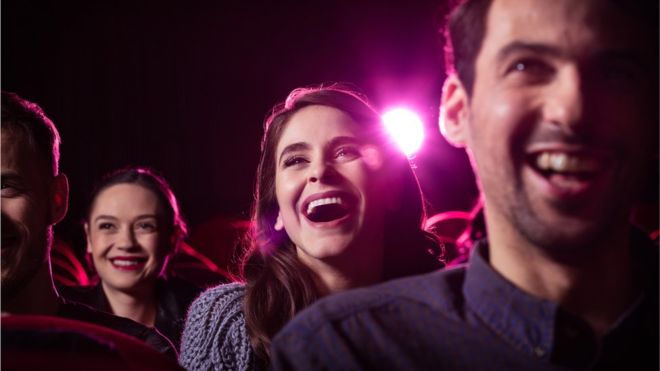 Adding canned laughter to the punchline of jokes - even "dad jokes" - makes them funnier, according to a study.

The effect was even bigger if real, spontaneous giggles accompanied a gag, the University College London scientists said.

They tried out 40 different jokes, ranging from the groan-worthy to the hilarious, on 72 volunteers.

The findings, in Current Biology, suggest laughter might be contagious or give others permission to also laugh.

Jokes from the study included:

-Why couldn't the toilet paper cross the road? Because it got stuck in a crack.

- Why can't you give Elsa a balloon? Because she will "Let It Go".

- Why was the tomato all red? Because it saw the salad dressing.

- What's round and sounds like a trumpet? A crumpet.

- What do you call an apple that farts? A fruity tooty.

A professional comedian recorded the jokes and two versions were created, with

The volunteers rated only one version of each joke - but, across the study, all of the jokes were heard with both different kinds of laughter.

The addition of any type of laughter improved the "funny" rating of the jokes - even the bad ones.

But everyone in the study found jokes funniest when paired with spontaneous laughter.

"This allowed those watching and listening to feel part of the performance.

"However, as the audience reaction was natural, certain 'comedy' programmes which weren't overtly funny wouldn't get a long laugh, so TV and radio producers increasingly added canned laughter to prompt an audience reaction.

"This research shows that while canned laughter does elevate the humour of a comedy, adding real laughter would get a better response.

"This has been adopted in shows like Friends, which are recorded in front of an audience with the real laughter amplified during editing for particular jokes that had been well received."