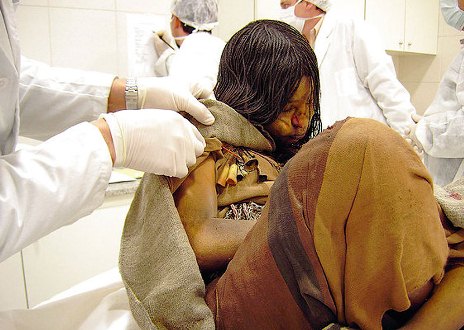 Tests on three mummies found in Argentina have shed new light on the Inca practice of child sacrifice.

Scientists have revealed that drugs and alcohol played a key part in the months and weeks leading up to the children`s deaths. Tests on one of the children, a teenage girl, suggest that she was heavily sedated just before her demise. The study is published in the Proceedings of the National Academy of Sciences.

Dr Emma Brown, from the department of archaeological sciences at the University of Bradford, said: "The Spanish chroniclers suggest that children were sacrificed for all kinds of reasons: important life milestones in the lives of the Incas, in times of war or natural disasters, but there was a calendar of rituals too."

The mummified remains were discovered in 1999, entombed in a shrine near the summit of the 6,739m-high Llullaillaco volcano in Argentina.

Three children were buried there: a 13-year-old girl, and a younger boy and girl, thought to be about four or five years old. Their remains date to about 500 years ago, during the time of the Inca empire, which dominated South America until the Europeans arrived at the end of the 15th Century.

"The preservation is phenomenal - they`ve been called the best preserved mummies in the world," explained Dr Brown.

The scientists believe this corresponds to the time she was selected for sacrifice. Earlier research also reveals that her diet changed at this point too, from a potato-based peasant diet to one rich in meat and maize.

Dr Brown explained: "From what we know of the Spanish chronicles, particularly attractive or gifted women were chosen. The Incas actually had someone who went out to find these young women and they were taken from their families."

The results also revealed that the girl ingested large amounts of alcohol in the last few weeks of her life. It suggests she was heavily sedated before she and the other children were taken to the volcano, placed in their tombs and left to die.

"In the case of the maiden, there is no sign of violence. She is incredibly well looked after: she has a good layer of fat, she has beautifully groomed hair, beautiful clothes," said Dr Brown.

"In this case we think with the combination of being placed in the grave with the alcohol and the cold - the mountain is over 6,000m above sea level - she would have passed away quietly."

The mummies are now housed in the Museum of High Altitude Archaeology in Salta, Argentina.