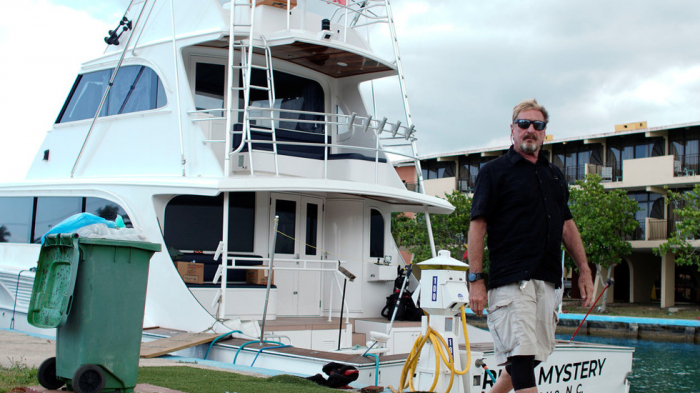 Cryptocurrency champion John McAfee is a free man once more, minus one boat, after a brush with authorities in the Dominican Republic that saw him detained less than a week after he claimed the CIA had tried to “collect” him, RT reported.

McAfee has been released from confinement in the Dominican Republic, according to tweets posted to his account on Wednesday that show the eccentric billionaire, disheveled but grinning, with his arms around several unidentified men. Some of his companions appear from their uniforms to be Dominican law enforcement – which he describes as “friendly and helpful.”

McAfee, his wife, and several friends were apprehended while docking their boat in Puerto Plata, Dominican Republic earlier on Wednesday, according to the AP, though McAfee’s tweet claims he spent four days in confinement. The authorities reportedly seized a bevy of high-caliber weapons, ammo, and “military props,” as well as the yacht itself, which is apparently being held for “research purposes.”

Forced to leave their floating fortress behind, the McAfees are “underway to a new location,” according to McAfee’s campaign manager Rob Loggia-Ramirez, who confirmed on Twitter that the pair had “been forced to leave The Freedom Boat for now.” Their destination has not been made public, though Janice McAfee mentioned traveling to an airport.

McAfee’s brief absence stirred up rumors he’d finally been nabbed by US authorities, coming as it did less than a week after he tweeted a defiant photo of himself and his wife armed with shotguns along with a heads-up that he’d “be dark” for a few days following what he claims was a run-in with the CIA. The antivirus software tycoon, who is running for president in 2020 “in exile,” says he is wanted by the IRS for tax evasion, having refused to pay any taxes for at least eight years on the grounds that they’re “unconstitutional and illegal.” He has been accused of several other bizarre crimes, including murdering his neighbor in Belize, but never officially charged with them, lending credence to his claim that the stories are part of a smear campaign.

McAfee has warned any interested parties in the US that he has a trove of documents that will “bury” corrupt members of the government if he is arrested or “disappeared.” The bitcoin evangelist claims to have over 31 terabytes of “incriminating data” rigged to a dead man’s switch that will trigger their release if he goes incommunicado. Loggia-Ramirez hinted at that possibility on Tuesday before McAfee’s whereabouts was known, mentioning that if he “misses his next check-in, events will be set into motion that I cannot prevent once they have begun.”