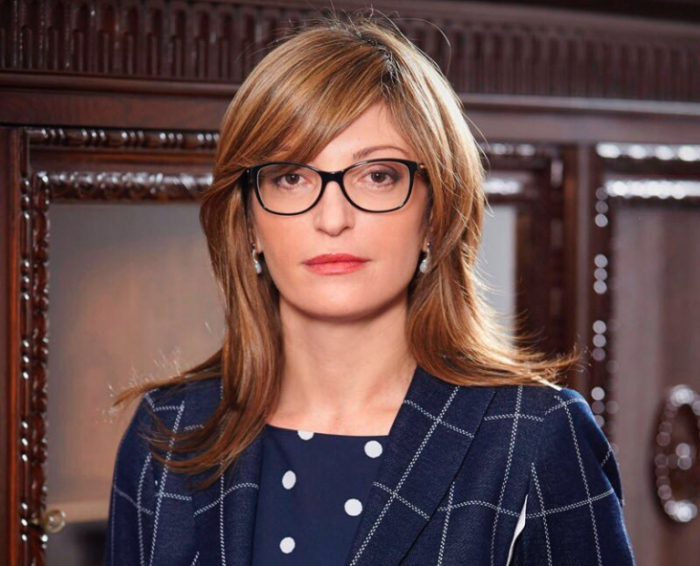 Bulgaria attaches great importance to its relations with Azerbaijan and regards Azerbaijan as a priority partner in the region in South Caucasus and the wider Black Sea Region, the Deputy Prime Minister and Minister of Foreign Affairs of Republic of Bulgaria Mrs Ekaterina Zakhariev said in her interview to Vzglyad.az, AzVision.az reports.

-The other day you made an official visit to Azerbaijan, held several important meetings with Foreign Minister Elmar Mammadyarov, Prime Minister of Azerbaijan Novruz Mamedov, Parliament Speaker Oktay Osadov and other officials. What were the main issues discussed during your visit to our country? How were the meetings? What have you agreed with the Azerbaijani side?

During my visit to Baku, a wide range of issues affecting the relationship between our two countries was discussed. Of course, during the talks, it was given priority to the most important topics for both of our countries, namely – the cooperation in the fields of energy and transport, but also we discussed the security in the region, the situation in Iran and other important topics from the bilateral and international agendas.
And talking about energy cooperation, Bulgaria and Azerbaijan are united in the view that the Southern Gas Corridor should also reach the countries of the Western Balkans, either via interconnectors or otherwise.

-By 2020, Sofia and Baku are preparing a draft of a new strategic cooperation agreement. What is this project? What issues will be included in this project besides energy cooperation issues?

An important milestone in the bilateral relations between our two countries was the signing on 4th of March 2015 of the Joint Declaration on Strategic Partnership between the Republic of Bulgaria and the Republic of Azerbaijan. According to this declaration, the First Session of the Strategic Dialogue Bulgaria – Azerbaijan took place on 31 October 2018 in Sofia. Of course, we give priority to our energy relations, considering Azerbaijan as one of our major partners in this field, but for us, it is important that our bilateral relations and the partnership between Bulgaria and Azerbaijan develop at the highest level in all areas of mutual interest.

-The trade turnover in bilateral relations does not reflect the real potential. In what areas is there potential for further development? What can Bulgaria offer the Azerbaijani market for the growth of commodity turnover between the two countries?

There are opportunities for joint investments in Bulgaria and Azerbaijan. We are ready to organize visits of Azerbaijani business delegations to Sofia and to other major cities to acquaint businesses with the opportunities for cooperation in areas such as energy, agriculture, food industry, machine building, tourism, etc. Bulgaria can export internationally well-known industry equipment, food industry products, pharmaceuticals, perfumery-cosmetics etc. The Bulgarian-Azerbaijani Chamber of Commerce and Industry (BATIP), established in 2014, has an important role to play in this process.

-In early 2018, the opening of direct flights between Bulgaria and Azerbaijan took place. Direct flights have contributed to the development of tourism, but between our countries, there is still a large enough potential to increase the number of tourists. How are Baku and Sofia going to develop a tourist destination further? Is there any work in this direction?

Bulgaria attaches great importance to the fact that there is a direct air route between Sofia and Baku. This is of the utmost importance, both for economic ties and for the development of business, tourism and, of course, for people-to-people contacts. According to our data, the opening of direct airline has increased twice the number of business and tourist trips between Bulgaria and Azerbaijan. Both Bulgaria and Azerbaijan have a rich history, culture, and offer high-quality tourist services. The opportunities for tourism offered by our countries should be promoted among us, for which the responsible ministries and agencies in our countries, as well as the business representatives, must be actively involved. At the end of last year, the fifth session of the Joint Intergovernmental Bulgarian-Azerbaijan Commission for Trade, Economic and Scientific and Technical Cooperation took place in Sofia. During the session, agreements were reached to deepen cooperation in areas of mutual interest, including tourism.

-Bulgaria is interested in the Baku-Tbilisi-Kars railway. How do you assess the prospects for the participation of Bulgaria in this project, in the field of transport with Azerbaijan in general?

Bulgaria is interested in cooperation with Azerbaijan in the field of transport and communications. We should take advantage of the geostrategic position of our countries in building a good infrastructure between Europe and Asia. Bulgaria attaches great importance to the Baku-Tbilisi-Kars line as a shortcut linking Europe with Asia. At present, our country has expressed interest in participating in this project, but our two countries are still in the process of negotiating the implementation of the Bulgarian participation.