Why is the Amazon rainforest on fire?- iWONDER 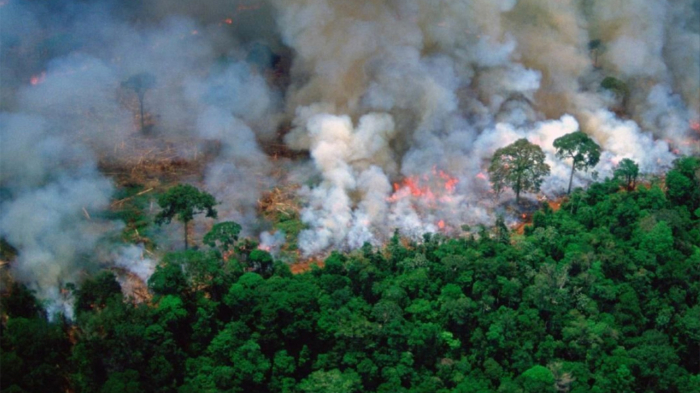 The Amazon is burning at an alarming rate as tens of thousands of fires lay waste to the world's largest tropical rainforest.

Brazil's National Institute of Space Research said there have been 74,155 fires in the Amazon this year as of Tuesday, according to its satellite data: an 84% increase from the same period last year.

The Amazon is often called "the lungs of the world," absorbing greenhouse gases that would otherwise harm the planet. It also is home to a number of indigenous people who rely on the forest's resources.

Here's why it's on fire and why it's become such a big problem.

Raging fires worldwide: July was the hottest month ever on Earth. Now massive wildfires are burning across the globe.

Why is the Amazon on fire?

People who want to clear land in the Amazon for business prospects are cutting down portions of the forest, leaving them out to dry and setting them on fire. With the trees out of the way, they have room to grow agriculture or to raise cattle.

This practice is illegal but is not being monitored by Brazil's government, according to Nigel Sizer, chief program officer of Rainforest Alliance. Not only is the government turning the other way, President Jair Bolsonaro is encouraging the practice, Sizer said.

"With confidence, we can say that a lot of that is illegal and is happening because the government has given the nod to illegal clearing and burning across the Amazon," Sizer said. "The president has even encouraged the invasion of indigenous territories and areas that the previous administrations have really been working hard to protect." 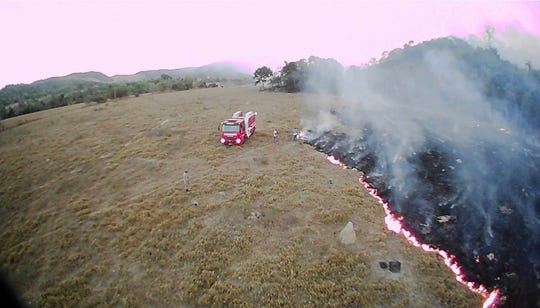 Bolsonaro has blamed environmental nonprofits for acting as obstacles in his mission to further develop Brazil's economy. His administration has eased protections of areas such as the Amazon, making way for people to damage the rainforest.

In response to the staggering increase in wildfires this year, Bolsonaro, without evidence, suggested nongovernmental organizations could be starting them to make his administration look bad. He took office Jan. 1 of this year.

"Maybe – I am not affirming it – these (NGO people) are carrying out some criminal actions to draw attention against me, against the government of Brazil," Bolsonaro told reporters.

When asked to provide evidence, he gave none.

"There is a war going on in the world against Brazil, an information war," Bolsonaro said.

Sizer, who has worked in the Amazon the past 30 years, says previous Brazilian administrations have been environmentally conscious and successfully decreased the rate of deforestation. With this president, though, he's worried about what's to come.

"It takes a while for people to react and respond and what we’re seeing now is the first wave of that," Sizer said. "I wouldn’t be surprised if these numbers get a lot of worse if the government does not change course." 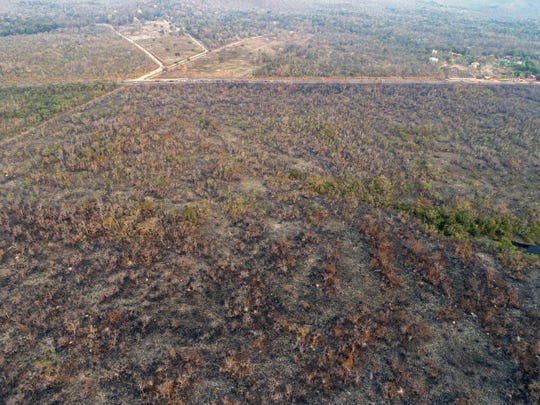 An aerial view Aug. 20, 2019, of an area of land that has been scorched by fire in the state of Mato Grosso, Brazil. According to media reports, the Brazilian Amazon region is suffering a record amount of fires, with an 84% increase on the same period last year. (Photo: ROGERIO FLORENTINO, EPA-EFE)

Are fires in the Amazon normal?

The Amazon holds a lot of moisture – massive fires aren't a natural occurrence there. Sizer said if it's a dry season and you set a fire in the undergrowth it may spread a little bit, but it peters out pretty quickly. But once you start clearing forest and let the trees dry, fires can cause more damage, he said.

"The forest shifts from being a fire-resistant ecosystem to a fire-prone ecosystem," Sizer said.

The trees, plants and animals in the Amazon are not adaptive to fire, and so are easily killed. This is different from the forests in North America that have adapted to wildfires and can survive them, Sizer said.

Sizer said putting out massive wildfires in the Amazon is "basically impossible." They'll run their course until they run out of chopped down trees to burn. The best way to stop a crisis like this is for the government to strictly protect the land, according to Adrian Forsyth, co-founder of Amazon Conservation Association.

"If you had an enlightened president in Brazil, they would put a stop to illegal deforestation in Brazil, just in the way that they prevent robbery and murder," Forsyth said.

How will the Amazon's fires affect people?

"The Amazon is a rain factory," Forsyth said, describing the Amazon's role in people's lives.

"The Amazon is the biggest storer of tropical carbon in the world, and if that goes up into the sky it’s going to be impossible to meet the climate goals that we’re trying to establish," Forsyth said.

Moira Birss, finance campaign director of nonprofit Amazon Watch, said the indigenous people and others who live in or near the forest face the most immediate harm.

"The fires specifically for folks who are living in that are extremely harmful, the air they’re breathing, the ability to live their daily lives, and in some cases, it’s affecting people’s land," Birss said.

Birss said many people have reached out to Amazon Watch asking about ways they can help. Ultimately, she said, it's the government's responsibility to put an end to illegal fire setting. Sizer said one way people can help, though, is by donating to Brazilian environmental groups.