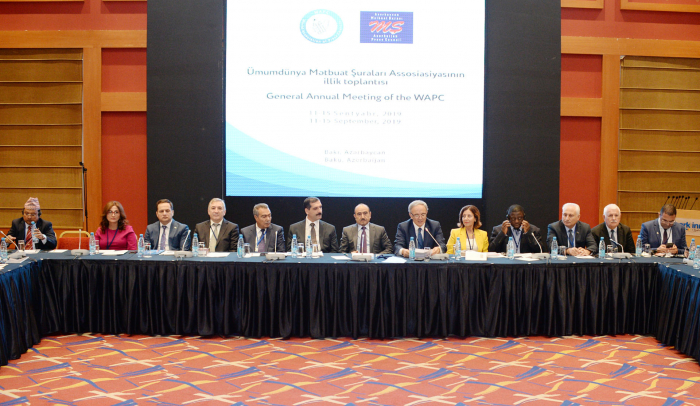 The annual meeting of the World Association of Press Councils (WAPC) has started on Sept. 12 in Baku, AzVision.az  reports.

The event is attended by the Assistant to the President of Azerbaijan for Public and Political Issues Ali Hasanov, representatives of about 20 countries of Asia, Africa and Europe, including Turkey, India, Bangladesh, Nepal, Kenya, Zimbabwe, Iraq, North Macedonia, Sri Lanka, Tanzania , Uganda, as well as representatives of the media in Azerbaijan.

Azerbaijani Presidential Assistant for Political Affairs Ali Hasanov noted in his speech that the Azerbaijani authorities consider ensuring freedom of speech and the press, media development one of the main directions of state policy.

A. Hasanov noted that at present more than 5000 media are officially registered in Azerbaijan. By the number of media, Azerbaijan is one of the leaders in the CIS and Eastern Europe. The country publishes up to 40 daily, more than 200 weekly and monthly newspapers, magazines and other media, about 300 news and analytical websites, about 20 news agencies, and about 100 media outlets in the regions. In Azerbaijan, there are 11 republican, 4 satellite, 13 regional and 17 cable television, 25 Internet television, 14 radio.

A. Hasanov noted that today more than 50 journalistic organizations are registered in Azerbaijan, about 30 organizations are actively involved in strengthening freedom of speech and information, economic independence of the press, protecting the rights of journalists, regulating relations between society and the media, and other issues: “The number of independent commercial companies that distribute printed matter reached 23. Now in our country more than 80 percent of the population are Internet users, and for this indicator we occupy about but of the first places in the world. The number of websites registered on the Az domain. exceeded 20 thousand. "

Baku hosts the annual meeting of the World Association of Press Councils.

Speaking at the annual meeting, Chairman of the Press Council of Azerbaijan Aflatun Amashov said that the organization he heads has been a member of this organization since 2005. He noted the successes in the field of media in recent years:

“Since 1998, censorship has been abolished in the republic, and the legislative framework has been improved. Not a single structure in Azerbaijan controls the press, it is completely independent. Azerbaijan’s Internet media is also successfully continuing its activities. About 3 million people in our country use social networks. ”

Note that the participants will make presentations at the event on the situation of the press and freedom of speech, as well as on media problems in their countries.

The annual meeting of the World Press Council Association will last until September 15th.