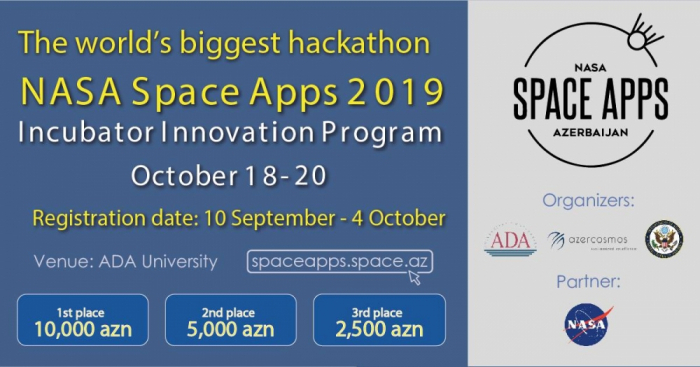 The world’s biggest hackathon-NASA Space Apps Challenge will be for the first time organized in Azerbaijan.

Co-organized by Azercosmos OJSC and the US Embassy in Azerbaijan, in partnership with Azerbaijan Diplomatic Academy (ADA) and the National Agency for Aeronautics and Space Research (NASA), the event will be held on October 18-20 at ADA University.

Since its inception in 2012, NASA’s International Space Apps Challenge has become the world’s largest global hackathon, engaging thousands of citizens across the globe to use NASA’s open data to build innovative solutions to challenges we face on Earth and in space.

Space Apps inspires local communities to come together, think intensely, and create solutions to important problems. Each year, Space Apps engages thousands of individuals in cities around the world to work with NASA’s open source data in a 48-hour sprint. Teams of technologists, scientists, designers, entrepreneurs, artists, and others collaborate to answer some of the most pressing challenges on Earth and in space.

The challenges change each year within the theme of Earth and Space. Some of the most popular challenges last years included subjects ranging from autonomous spacecraft inspection, to monitoring disasters, to exploring the beauty of the Universe.

Challenges of Space Apps 2019 will be announced after September 25. Each participating team will be allowed to work only on one challenge and can start the actual work only at the hackathon itself.

At the end of the last day of the hackathon, teams will take turns presenting their projects to the judges. Each team presentation should be short (4 minutes each and 2 minutes for answering jury questions). The presentation is the opportunity for each team to highlight its work for the judges to see.