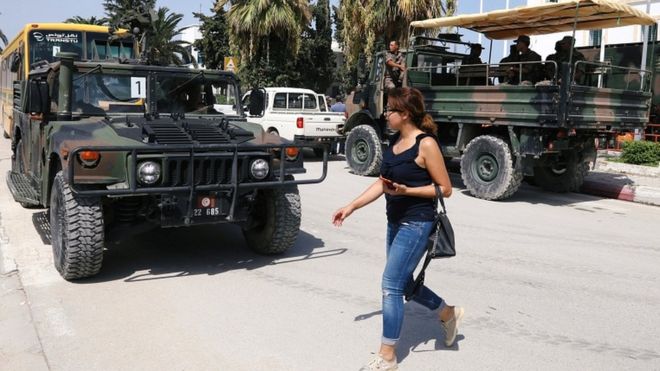 Tunisia is set to hold its second free presidential poll since the 2011 uprising that toppled ex-president Ben Ali and sparked the Arab Spring.

It was brought forward from November after the death in July of Beji Caid Essebsi, the first democratically elected president, who took office in 2014.

Twenty-six candidates, including two women, are running in the election.

It is widely viewed as a test of one of the world's youngest democracies.

Essebsi won Tunisia's first free presidential elections in 2014 and was credited with largely maintaining stability in the country during his almost five-year rule.

At 92, he was the oldest sitting president in the world at the time of his death. Essebsi had previously confirmed that he was not planning to run for re-election.

How does the vote work?

A candidate needs a majority of votes to win the election. If no-one gets a majority in the first round, the two candidates with most votes will face a second, decisive round.

The winning candidate will be appointed to office for a five-year term.

The constitution states that Tunisia's president has control over defence, foreign policy and national security. The prime minister, chosen by parliament, is responsible for other portfolios.

Parliamentary elections are scheduled to take place in October.

Why is this election significant?

The country has won praise as the only democracy to emerge from the Arab Spring uprisings that began in Tunisia, before spreading across the Middle East and North Africa.

In what was hailed as a sign of its successful democratic transition, Tunisia this month held its first-ever televised debate of presidential candidates.

However, it has not all been smooth sailing. In recent years, the country has suffered attacks by Islamists and economic problems, with unemployment a persistent issue

In 2018, protesters across the country took to the streets to oppose the government's austerity measures.

Prime Minister Youssef Chahed told Reuters news agency that economic opportunities must improve "if Tunisia is to join the club of strong democracy".

Tunisia is the birthplace of the Arab Spring uprisings.

Widespread discontent at economic hardship, decades of autocratic rule and corruption erupted into mass demonstrations in December 2010 after a street vendor set himself on fire when officials confiscated his cart.

The unrest led to the ousting in 2011 of President Ben Ali, who had been in power for 23 years.

Three years later, Tunisia's parliament approved a new constitution, which detailed how the new democracy would be run.

The text was hailed by the United Nations as a "historic milestone". Significant aspects included the recognition of equality between men and women, guaranteeing personal freedoms and splitting power between the president and prime minister.