Concept of 'Nation of Nagorno Karabakh' does not exist - President Aliyev 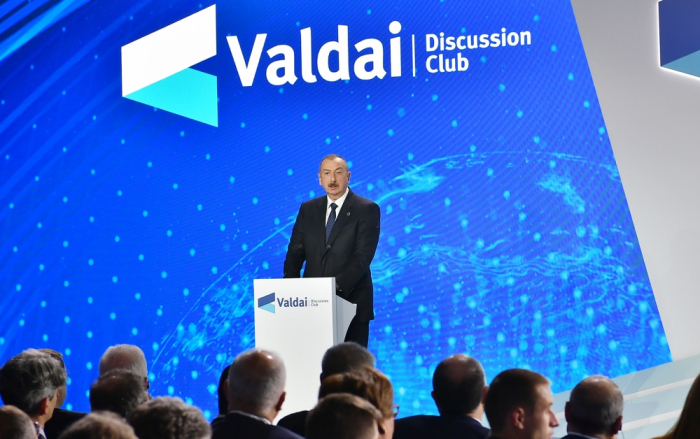 As reported earlier, the 16th Annual Meeting of the Valdai Discussion Club was held in Sochi on October 3. Azerbaijani President Ilham Aliyev also attended the session.

AzVision.az presents the speech delivered by President Aliyev at the session:

- First, I would like to thank President Vladimir Putin for his invitation to attend the 16th Annual Meeting of the Valdai International Discussion Club. I want to note that Azerbaijanis follow the activities of the club with great interest. This has become one of the most important international places where the most current issues are discussed and recommendations are given for cooperation.

I listened to President Putin’s speech with big interest. Russia has overcome all those difficulties. When he spoke of the situation in Russia at the border of the millennium, he did not mention that Russia has overcome all those difficulties thanks to President Vladimir Putin. This is a reality and everybody should know about it. Thanks to President Putin’s courage, determination, wisdom and patriotism, Russia has conquered all those hardships and become one of the leading and big countries of the world. Today we had a meeting with President Vladimir Putin. We regularly hold meetings. When we do not meet within two months, it feels like a break of several months. The relations between Azerbaijan and Russia are of strategic importance. It is not a coincidence that we call each other as strategic partners. Today we have looked over the expanded agenda of bilateral relations and determined the directions for future activities. There is an active political dialogue between our countries. Regular meetings of heads of states and other officials enable to deepen the cooperation. Within the international organizations, we have active bilateral relations and always support each other in all important issues. At summer session of the Parliamentary Assembly of the Council of Europe (PACE), Azerbaijan voted for Russia’s return to PACE. I would like to congratulate my counterparts in this regard.

There is a positive dynamics in development of economic trade relations. Every year we increase the trade turnover. It becomes difficult each year. If we spoke of the increase by 20 percent last year, the rate has been higher this year. Determination of priority directions of cooperation within five ‘Road map’ will certainly result in expansion of trade relations. There are almost 700 companies with Russian capital in Azerbaijan. Azerbaijani investment in Russia is $1.2 billion. The amount of Russian investments in Azerbaijani economy is $ 4.6 billion. Here Azerbaijan falls behind. However, it has objective reasons. Besides, it is necessary to add that Russian banks help us in industrialization. They have allocated credit in the amount of $ 1 milliard for projects realized in real sector of economy.

Moreover, military and technical ties actively improve. Today we also had agreement on continuation of work in this direction. Although the amount of contracts signed between us as part of the purchase of technical equipment from Russia is $ 5 billion, $ 3 billion has already been realized. As I said, we intend to continue working in this direction.

One of the most significant directions of our cooperation is the field of transport. The volume of cargo traffic delivered through North-South corridor has risen by 8 times in comparison with the previous year. Although the volume is not big, the dynamics is quite powerful. I also want to note that the North-West corridor has also been launched. Cargo from Russia is sent to South and West passing through Azerbaijan. This is largely due to the fact that we have agreed on our tariff policy and have recently made huge investment in modern transport infrastructure in Azerbaijan.

One indication of our relations provides a clear picture of the spirit and character of relations between our countries and nation. Last year 880,000 Russians travelled Azerbaijan. The number is even higher this year. It is no secret that tourists do not just visit sightseeings and enjoy national cuisine. They visit places where they feel safe, comfortable and at home. I believe that this is because of the rapid development of tourism.

I would like to speak of successes in the field of education. Moscow State University and First Moscow State Medical University has branches in Azerbaijan. All public universities of Azerbaijan have departments of Russian language. About 25,000 students study in Russian. In 338 schools with Russian language of instruction, 130,000 students study in Russian.

Today there are no Azerbaijani population in the occupied territories. Majority of territories was burnt. Homes, schools and other public buildings were destroyed. As a result of the conflict, Azerbaijan faced a humanitarian catastrophe. More than 700,000 internally displaced persons from Nagorno-Karabakh and other occupied territories of Azerbaijan, as well as 250,000 Azerbaijanis, who have been expelled from their historical lands in modern Armenia. The Security Council of the United Nations adopted four resolutions requiring the immediate and unconditional withdrawal of the Armenian armed forces from the occupied territories of Azerbaijan. For more than 25 years, these resolutions have not been implemented. Here we come to the important issue - the implementation of those decisions. The UN Security Council is the highest international body. If the decisions of the Security Council have not been implemented for more than 25 years, this raises many questions about the effectiveness of the organization. In Azerbaijan, we are concerned about the selective nature of the implementation of those resolutions. Sometimes such resolutions are realized within few days, and sometimes they are not needed for specific military operations. In our case, resolutions remain on paper. The Armenian-Azerbaijani Nagorno-Karabakh conflict must be resolved within the framework of Azerbaijan's territorial integrity, the UN Charter, the UN Security Council resolutions and the Helsinki Final Act. Recently Armenian PM repeatedly noted that the settlement of the conflict should be acceptable to nations of Azerbaijan and Armenia and nation of Nagorno-Karabakh. I have to note that the concept of 'Nation of Nagorno Karabakh' does not exist. Nagorno-Karabakh has a population, which consisted of the Azerbaijani and Armenian people who had equal rights before the conflict.

Speaking of what solution is best for Azerbaijan, it is to restore Azerbaijan's internationally recognized territorial integrity and return refugees and IDPs to their native lands and Nagorno-Karabakh. This is consistent with resolutions of the UN Security Council and Helsinki Final Act. I must say that Armenia still continues its military aggression against Azerbaijan. Yesterday the civilian, a resident of Gazakh region, located on the border with Armenia, away from the conflict zone was killed as a result of sniper fire by Armenia. In April 2016 six civilians, including a child were killed as a result of the Armenian military provocation.

I also want to touch upon the surprising statement made by Armenian Prime Minister. This statement was also answered by the Russian Federation within the framework of the Valdai Forum. The statement reads: “Karabakh is part of Armenia and a full stop”. This is a lie. Karabakh is a historical and ancestral land of Azerbaijan. So Karabakh is Azerbaijan and an exclamation mark!

Despite the occupation, humanitarian catastrophe in the country in the early 1990s, where one out of every eight people was a refugee, Azerbaijan has come a long way in its development. With the exception of the first years of independence when a puppet, anti-national and corrupt regime of the Popular Front ruled in the country, Azerbaijan has been living in a stable environment for 26 years. The key contribution to that was made by President Heydar Aliyev who managed to prevent civil war, stop the occupation, overcome chaos and ruin, and put Azerbaijan on a path of development. Thus, for 26 years, the Azerbaijani people have been living in the conditions of stability and development.

International positions of our country are strengthening. One of the indicators proving this fact is that a few years ago, our country was elected a non-permanent member of the UN Security Council with the votes of 155 countries. It was not that easy, it took us 3 days and 16 rounds, but eventually, justice gained the victory. I would also like to note that the Russian Federation and 154 other countries have greatly supported us.

We are pleased that, Baku has been chosen as a venue for Russia’s and NATO's top military command for several years. We assess this fact as an expression of confidence to us. The Non-Aligned Movement Summit will be held in Baku later this month. Azerbaijan will be the chair of this organization for three years.

Along with the international agenda, of course, we are focusing on economic development. Great success have been achieved in this direction. Azerbaijan is a country with low external debt. According to this indicator, we are in 9th place, with foreign debt accounting for 17% of GDP. Russia is in 6th place. We're not competitors, but we're always focused on the best results. A lot of work is being done to reduce poverty, and this figure has been reduced from 49% in 2003 to 5%. Economic growth also helps to solve social problems. This year, the minimum wage has almost doubled, and the minimum pension has increased by 70 percent. We are investing in modern technology; 80 percent of our population are internet users. Azerbaijan is a country with three satellites. Two of them are telecommunications and one is the satellite that observes the Earth's surface.

Finally, in support of Vladimir Putin’s thesis on transport projects not only promote trade but also serve as a bridge between nations, I would like to say that the North-South and East-West corridors passing through our country are steps towards broader international cooperation.