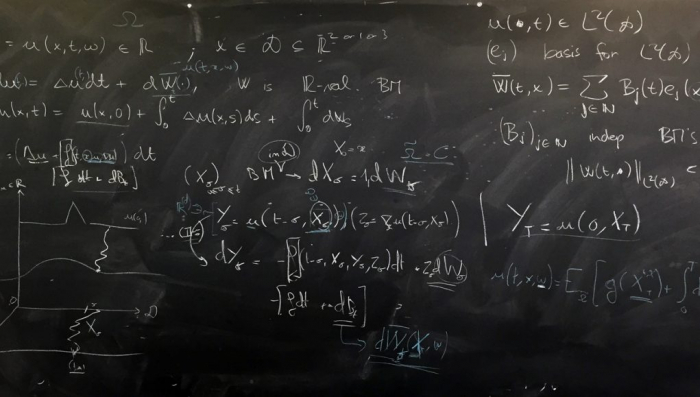 Another year, another wave of students trampling across autumn leaves, making their way to their first lectures heady with a cocktail of excitement, apprehension and a nasty hangover. But while every year brings new faces, one feature of the academic landscape remains ever-present: the huge, imposing blackboards.

Now photographer Jessica Wynne, a professor at the Fashion Institute of Technology in New York, has thrown a spotlight on this workhorse of academic endeavour, travelling across the US and beyond to capture the blackboards of mathematicians.

The result, a project called Do Not Erase, reveals the scribbles, workings and eureka moments of minds bursting with equations and theories, a paean to mental graft and the blackboards that display it. You can almost feel the tickle of dust in the nose, the thump of chalk on the board, the swish of a cuff brushing away a mistake.

Wynne says the project came about after she got to know the mathematicians Amie Wilkinson and Benson Farb, both professors at the University of Chicago, and their academic friends during summers in Cape Cod.

“I became fascinated by the people, the mathematicians, and then, when I was talking to them about their work, I realised that their thought process and what they do is extremely creative – and I never really thought about mathematics in that way,” says Wynne.

“I thought the blackboards would be an interesting way to get a peek into their world,” she says.

The project also struck a personal note. “My parents were teachers at a small New England boarding school and I grew up on the campus – I sort of grew up in a classroom,” she says.

Visiting institutes around the world, from the US to France and Brazil, Wynne says she gives mathematicians a free rein as to what they draw. Their fields are diverse, ranging from geometric topology to quantum mechanics.

“For some of them, I wandered into lectures and some have been in their offices and they have done boards for me,” says Wynne, adding that she is just about to meet a mathematician at Yale University to photograph a blackboard that hasn’t been erased in three years. “He said, ‘I just keep adding to it,’” she says.

That the subjects of her portraits are somewhat antiquated is no surprise. Wynne says she deliberately shunned whiteboards or digital boards. “I like the timelessness about blackboards,” she says, adding that they are also intriguing for their capacity to show layer upon layer of working.

Professor David Damanik, a mathematician at Rice University, who is among those featured, says he uses blackboards to build a narrative. “On the blackboard, it is easier to develop your story and your argument.”

Wilkinson agrees. “Almost everyone in the maths department at the University of Chicago teaches at a blackboard. When we are working on a problem it is the best way, when you have more than two people, for example, to show your ideas,” she says.

It’s a process Wynne saw for herself when she joined Wilkinson on a trip to Paris and watched her work with her collaborators on a blackboard. “It is almost like this interesting dance or performance as you watch these mathematicians and it is really beautiful,” she says.

The sheer size of blackboards, ranging from single wall affairs to extensive, multi-panel boards, is important. “It is this giant canvas,” says Wynne. “Seeing everything in one large piece, you can jump around on the board and connect pieces and take things away and add things... I haven’t seen any other tool or any other device that matches that experience.”

“There are so many aspects to a blackboard that is so wonderful that just can’t be replaced by anything else,” says Wilkinson.

Not that it hasn’t been tried. Wilkinson says there was a furore among mathematicians at one US university when the blackboards were stripped out and replaced with whiteboards. “You would remove the blackboards at the University of Chicago over the faculty’s collective dead, rotting bodies,” she said, although she acknowledged that academics in some other disciplines, like computer science, are not averse to whiteboards, a medium she sometimes uses but dislikes for being harder to clean, and the hard to remove stains they leave on the skin.

If working with chalk is alluring, so too are the boards themselves. “The ones in Paris were beautiful because they were so old and I really loved and appreciated the old slate, just as a material,” says Wynne, adding that the zigzag boards at Rice University, on which Damanik’s work is shown, produced a striking image. “His board was coming out at you, so it has this three-dimensional, almost disorienting feeling when you look at it,” she says.

Damanik’s multi-board work, he tells me, explores how to understanding the time evolution of a quantum mechanical system, focusing on the importance of various mathematical features.

“The way the chalk looks on the board I find to be very beautiful, but also knowing that there are other layers of meaning there,” says Wynne. “I also like the fact that what I am documenting will never be there again.”

Wilkinson and Damanik say there are stories of lightbulb moments lost to an inadvertent duster, though it hasn’t happened to them. “When someone writes something particularly excellent, one tends to photograph it,” says Wilkinson.