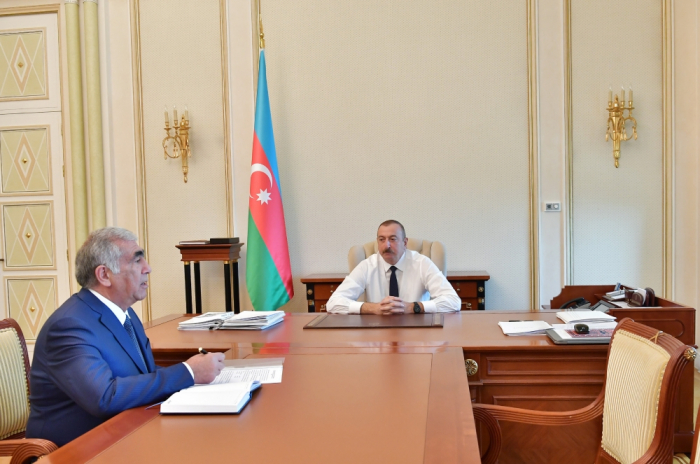 President of the Republic of Azerbaijan Ilham Aliyev has met with Chairman of the Board of Directors of Azerbaijan Highway State Agency Saleh Mammadov.

- Road construction in Azerbaijan has assumed large proportions. We build a thousand kilometers of roads each year. This year is no exception. I am glad that the latest report of the Davos World Economic Forum noted our progress in this area. Whereas we were in 34th place in terms of the quality of roads last time, this year we are in 27th place, including first place in the CIS. This indicates that investments in the road infrastructure are producing effect. Road construction has gained momentum. High-quality roads are built. Keep up the good work. All roads in Azerbaijan should continue to meet the highest standards.

This year, funds are also envisaged for the construction of trunk and rural roads. This includes my latest instruction to pay attention to the condition of roads in the suburban settlements of Baku. It is necessary to renovate both inter-settlement and intra-settlement roads and build new ones. There are still dirt roads in some places. This shouldn’t be the case. Intra-village roads should be asphalted.

And now can you please report on what work has been done to date and what measures will be taken before the end of the year?

Chairman of the Board of Directors of Azerbaijan Highway State Agency Saleh Mammadov said:

As you noted at the 11 January 2019 meeting of the Cabinet of Ministers dedicated to the results of the socioeconomic development in 2018 and upcoming tasks, the investment program for this year provides sufficient funds for road construction. Using these funds, the plan for 2019 was to build new roads, repair the existing roads with a length of about a thousand kilometers and build bridges in Azerbaijan. I want to inform you today that in the first nine months of this year, 903,500 kilometers of roads have already been built and are fully ready for operation.

President Ilham Aliyev: In other words, this figure will reach a thousand kilometers by the end of the year.

President Ilham Aliyev: What is the status of the new road to Khinalig?

Saleh Mammadov: At present, a 10km subgrade stretch of the new 31km road to Khinalig is fully ready. In addition, the 24km Alpan-Susay road with asphalt concrete coating, which is the start of the road leading to Khinalig and a branch of the Guba-Gusar road, is also ready for operation. Two bridges have been built on this road, and they are in a state of full readiness.

President Ilham Aliyev: A road was also to be built to Gonagkand. Requests came from this village as well. I also instructed you to build a road to Gonagkand with a length of more than 50 kilometers.

President Ilham Aliyev: When will it be commissioned?

Saleh Mammadov: Dear Mr President, the 40km stretch of the road with a two-layer asphalt concrete coating is fully ready. Seven bridges have already been built on this road. The last bridge has been erected over the Valvalachay river. There was no bridge there for years. When the river burst its banks, people had to wait for days and weeks. Now, a six-span bridge 120 meters long and 11 meters wide has been built, and it is fully ready for operation. On your instruction, funds are envisaged in the investment program for next year. using these funds, an anti-erosion coating will be applied to the road, after which the 50.3km road will be fully ready for operation.

President Ilham Aliyev: What is the state of affairs with trunk roads? In particular, what is the status of the new road to the border with Russia?

Saleh Mammadov: Dear Mr President, on your recommendation and instruction back in 2018, it was decided to build a new road from Baku to the border with Russia. In accordance with the initial design, we started building the new road from the 45th kilometer of the Baku-Russian border highway, i.e. near Zeynalabdin Tagiyev settlement to the border with Russia. To date, construction has been completed on a section of the new road from the 45th kilometer to Gilazi, which is at the 75th kilometer. It has a two-layer asphalt concrete coating. A road junction has been built on this road. In general, a 38km stretch of the road from the border with Russia to Baku has been asphalted. The roadway is fully ready on a 92km stretch. The plan is that we will commission this road by the end of 2020. On your instruction, there will be no junctions with a single-level intersection on this road. In five places there will be multi-level junctions connecting the new road with regional centers.

President Ilham Aliyev: I see. What is the progress on the expansion of the Ganja-Georgian border road to four lanes?

Saleh Mammadov: Work continues on the 131km stretch of the Ganja-Georgian road to the Red Bridge. Before the end of this year, an asphalt concrete coating, including an anti-erosion layer, will be applied to a 34km stretch of this road. 72 percent of the subgrade work has already been completed. Private land plots in the construction zone were acquired through payment of compensation from the funds allocated for these purposes. There are no obstacles. This road is scheduled for completion by 2022 but we promise you that we will commission this road with high quality by the end of 2021.

Saleh Mammadov: Mr President, after the people of Astara raised this question during your visit to the district, you initially allocated 2 million manats. To date, the road to the border with Iran has been built. The issue of building a bridge across the Astarachay river is being addressed now. This November, a meeting will be held with Iranian road workers. A memorandum will be signed during this meeting. As soon as the bridge is ready, we will commission this road. Thus, this road will be taken outside the city of Astara.

President Ilham Aliyev: Very good. It is also necessary to pay attention to intra-village roads. Recently, roads in Kurdakhani settlement were fully renovated. This excellent example should be replicated in all the settlements.

Saleh Mammadov: Dear Mr President, thanks to your direct instructions and care, 242 kilometers of internal roads have been asphalted and fully commissioned in the suburban settlements of Baku this year. Today, the population of these settlements uses very comfortable roads. In addition, by the end of the year, the construction of another 57 kilometers of roads will be completed in the settlements. In other words, based on your recommendation, we will bring the length of modern intra-village roads to 300 kilometers. You have allocated funds for this. We are trying to complete the construction of these roads at a high level using the allocated funds.