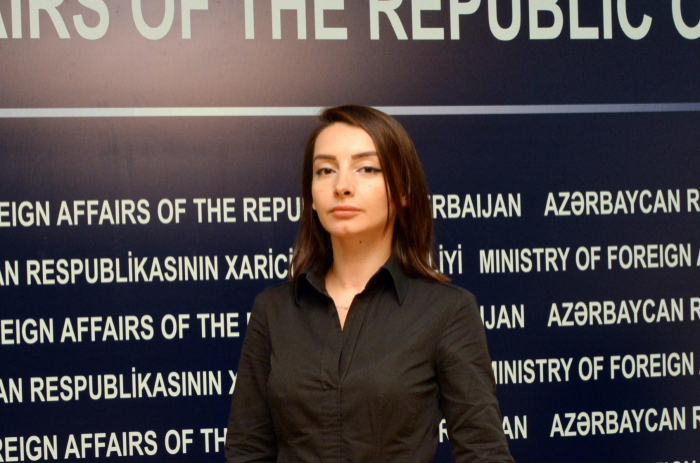 The information reflected in the statement issued by European Union (EU) about detention of tens of people is not true, spokesperson for Azerbaijan’s Foreign Ministry Leyla Abdullayeva told AzVision.az Oct.20.

“Most of those participating in the illegal rally were released after getting an official warning. Freedom of assembly has been ensured in Azerbaijan,” she said.

“Despite this, they actually attempted to hold a street procession in this territory. According to the first paragraph of the third part of Article 9 of the Law of Azerbaijan Republic “On Freedom of Assembly”, rallies, demonstrations, street processions can be prohibited if they are held in a radius of 200 meters around buildings of relevant higher authorities. The appeal of the National Council on holding a rally on October 19 from 15:00 to 17:00 was considered by the Executive Power of Baku City. According to the second paragraph of the third part of Article 9 of the Law “On Freedom of Assembly”, holding rallies in protected metro areas is prohibited. Therefore, the Baku City Executive Power proposed to hold a rally at the indicated time at the Garadag sports and training base of the Neftchi Sports Club on 28 May Street in Lokbatan, Baku. Despite this, there was an attempt to hold an illegal rally in the central part of the city,” said the spokesperson.

She noted that the illegal rally was prevented by the police.

“The police treated the participants politely and no one was hurt,” she said.

Abdullaeva noted that the EU would better pay attention to the ongoing developments in Barcelona, ​​use of rubber bullets by police against peaceful demonstrators, beating of media representatives and the excessive use of violence.

“Brutality of the police against demonstrators in France for months goes beyond all norms of human behavior. Eleven people died and thousands were injured. There are people who have lost their eyes and got injured. Unfortunately, double standards are applied in such cases as well. The polite behavior of police officers is undermined. The EU turns a blind eye to the events that occur right under its nose. It is unacceptable to speak with Azerbaijan in such a language,” she concluded.