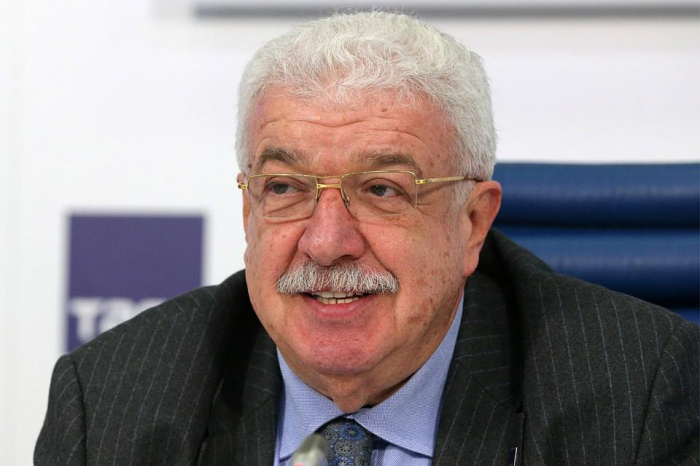 Gusman noted that first of all, this can be judged by the level of meetings that took place during the visit.

“Azerbaijan’s first vice-president met with Russian President Vladimir Putin and was awarded honorable Russian Order of Friendship,” first deputy director general added. “Mehriban Aliyeva met with Russian Prime Minister Dmitry Medvedev, Chairperson of the Federation Council of the Russian Federal Assembly Valentina Matviyenko. Azerbaijan’s first vice-president participated in such biggest and the most important event as the opening of the “Azerbaijan” pavilion at the Exhibition of Achievements of National Economy.”

“Mehriban Aliyeva opened “Azerbaijan” historic pavilion recreated as a result of reconstruction, literally to the smallest details, at the Exhibition of Achievements of National Economy together with Valentina Matviyenko,” Gusman said. “An interregional forum was held in which Mehriban Aliyeva and Valentina Matviyenko also participated. In addition, Mehriban Aliyeva held working meetings in Moscow. All this says about the importance that the Russian side attached to the visit of the Azerbaijani guest. I can say with all responsibility that not everyone, even not all heads of state, receive such high honour, and not all visits take place with such a rich political program.”

The first deputy director-general noted that the special reception rendered to the Azerbaijani first vice-president isn’t only great respect for Mehriban Aliyeva as a statesperson and outstanding personality, but also an expression of a special attitude towards Azerbaijan.

“The basis of these relations includes personal interaction, close cooperation and friendly relations that have developed between the Azerbaijani and Russian presidents,” Gusman said. “This, of course, is the result of many years of work in various directions in Azerbaijan and Russia on the development of comprehensive and mutually beneficial cooperation.”

The first deputy director-general also emphasized that the high level of relations between Azerbaijan and Russia is manifested not only in political but also in the economic sphere.

“In her speech at the opening of Azerbaijan’s pavilion, as well as in an interview with me for the Russian media outlets, Mehriban Aliyeva gave convincing figures of the level of economic relations that exist between Azerbaijan and Russia, that are developing from year to year,” Gusman said. “This doesn’t happen instantly, it also requires political will, appropriate resources and the perseverance of both sides, so that this economic cooperation would develop and strengthen.”

Gusman noted that humanitarian cooperation and contacts in the field of culture and in the social sphere also hold a special place in relations between the two countries. In Gusman’s opinion, the development of cooperation in all these areas is progressing.

“Suffice it to say that not a day goes by without a tour of a Russian artist or group to Baku,” the first deputy director-general said. “In turn, as Mehriban Aliyeva also emphasized, many hundreds of students from Azerbaijan study at various universities in Moscow and other Russian cities.”

Gusman noted that the humanitarian sphere is very delicate and touches very thin strings of the human soul. From this point of view, Gusman drew attention to the special care for the preservation of the Russian language in Azerbaijan.

“The first vice-president spoke about this at a meeting with the Russian president,” Gusman said. “Azerbaijan’s Russian-speaking population feels as full-fledged citizens of the country. Azerbaijan’s national leader, Heydar Aliyev, also spoke about the care for the Russian language, the role of the Russian language as the language of international communication. This is also constantly emphasized by Azerbaijani President Ilham Aliyev. I am personally ready to completely agree when President Ilham Aliyev says that multiculturalism, which hasn’t taken root in a number of European countries, has deep roots in Azerbaijan.”

“The history of Azerbaijani multiculturalism, multinationality and multiconfessionalism aren’t fictitious words,” the first deputy director-general of TASS noted. “I myself grew up and lived in Azerbaijan for several decades and I can testify that this is absolutely organic for the Azerbaijani society, for the Azerbaijani people. The fact that not a single Russian school was closed in Azerbaijan, but, on the contrary, Russian language and teaching in Russian is developing, doesn’t surprise me personally. That’s because I know, on one hand, what attention the republic’s leadership pays to the Russian language, and on the other hand, I understand that Azerbaijani youth has interest in the Russian language as an important tool of international dialogue.”