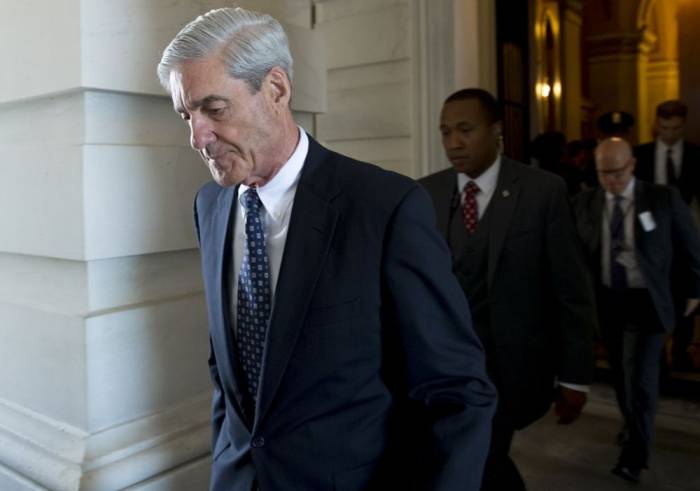 The Justice Department released hundreds of pages of FBI interview notes on Monday featuring a cast of characters from President Trump’s inner circle in the latest batch of documents from special counsel Robert Mueller’s investigation.

The 295 pages of heavily redacted records, focusing on topics spanning from Trump’s frustrations with the Russia investigation and Attorney General Jeff Session’s recusal to the firing of FBI Director James Comey and national security adviser Michael Flynn, are the second such tranche released through a Freedom of Information Act lawsuit by BuzzFeed.

Mueller’s report concluded the Kremlin interfered during the 2016 election but didn't establish any criminal conspiracy between Russia and Trump's campaign.

Rick Gates, the former business partner of Trump campaign chairman Paul Manafort, spoke with the FBI on April 18, 2018, about Flynn’s firing and Trump’s anger over Sessions. Gates said he overheard conversations that current Trump lawyer Rudy Giuliani wouldn’t have recused, and the agents noted, “Gates knew Giuliani had been the first choice for Attorney General, but turned it down because he wanted to be Secretary of State instead.”

Michael Cohen, Trump’s former personal lawyer currently serving a prison sentence related to lying to Congress about the timing of the proposed Trump Tower Moscow, spoke with investigators about the guidance given to him by Trump legal team member Jay Sekulow about how to respond to congressional inquiries. Cohen also responded to claims made about him in Christopher Steele’s dossier, with agents writing that “Cohen did not have any concern about the dossier allegations” and “Cohen had never been to Prague,” despite the British ex-spy’s claims.

John Kelly, Trump’s former chief of staff, told the bureau on Aug. 2, 2018, about Trump’s anger with a New York Times story that claimed Trump told then-White House counsel Don McGahn to fire Mueller, which McGahn declined to do. Kelly recounted Trump’s denials about giving such an order to McGahn and his request that McGahn “correct the record,” but Kelly told investigators McGahn told him that he and Trump “did have that conversation.”

Hope Hicks, the former White House communications director, told agents about Trump’s annoyance with Flynn during a Dec. 8, 2017, interview. Investigators noted, “Trump told Hicks that Obama told him to watch out for Flynn” and “Hicks thought the comment sat with Trump more then she expected.” Trump “thought Flynn had bad judgment” and “it bothered Trump that both Flynn and his son sent bad tweets,” according to investigators. An FBI interview on March 13, 2018, included Hicks discussing the June 9, 2016, Trump Tower meeting involving Manafort, Donald Trump Jr., Trump son-in law Jared Kushner, and Russians that included Natalia Veselnitskaya. The agents said Hicks thought the emails setting up the meeting “looked really bad.”

Rod Rosenstein, Trump’s former deputy attorney general, spoke with investigators on May 23, 2017, one week after appointing Mueller special counsel. Rosenstein detailed the May 8, 2017, Oval Office meeting involving himself, Trump, McGahn, Sessions, Sessions’s chief of staff Jody Hunt, and White House chief of staff Reince Priebus centered around Comey, telling investigators, “I knew when I left, Director Comey would be fired.” Rosenstein was tasked with writing a memo detailing his concerns with the bureau’s leader. When Comey was fired on May 9, 2017, Rosenstein told investigators he was “angry, ashamed, horrified, and embarrassed.” Rosenstein contacted Mueller the next day.

Chris Christie, the former New Jersey governor and Trump campaign surrogate, told investigators on Feb. 13, 2019, about discussions he’d had with Trump in early 2017. Christie said Trump claimed, “Now that we fired Flynn, the Russia thing is over,” with Christie responding with laughter, saying, “No way.” Christie also said Trump wanted him to call Comey and tell him, “I [Trump] really like him,” but Christie thought it was a bad idea. Christie further claimed he urged Trump not to fire Mueller.

Corey Lewandowski, Trump’s former campaign manager, spoke with bureau agents on April 6, 2018, about a mid-June 2017 meeting where Trump dictated a speech about Mueller and Russia he wanted Lewandowski to give to Sessions to deliver, the crux of which was that his attorney general should declare Trump “didn’t do anything wrong except he ran the greatest campaign in American history.” Lewandowski didn’t give the speech to Sessions, instead placing it in a safe at his home, though he passed a typed copy of it to White House deputy chief of staff Rick Dearborn on July 19, 2017. Lewandowski provided his handwritten notes from the meeting to the FBI.

Read the original article on washingtonexaminer.com.