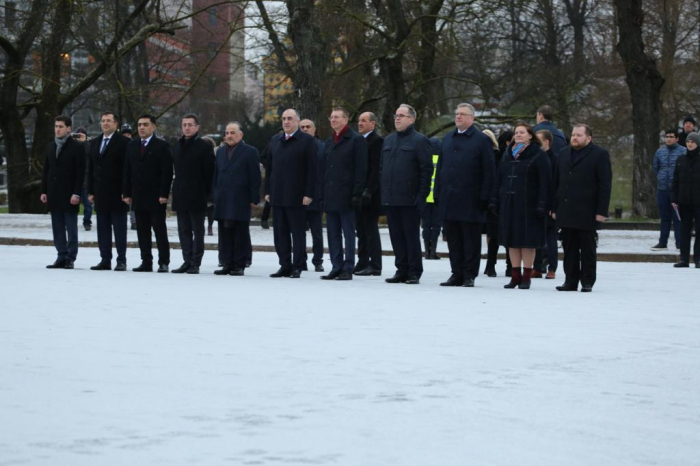 Within his official visit to Latvia Foreign Minister Elmar Mammadyarov met with Edgars Rinkēvičs, Minister of Foreign Affairs of the Republic of Latvia.

At the meeting, the sides expressed their satisfaction with the current level of Azerbaijan-Latvia relationship and had a broad exchange of views on future development perspectives between two countries.

During the meeting, the sides discussed the issues of bilateral cooperation in economic, trade, cultural, education and other areas, as well as agreed to hold the next meeting of the Joint Inter-Governmental Commission on Cooperation between the Republic of Azerbaijan and the Republic of Latvia.

Noting the fruitful bilateral and multilateral cooperation between Azerbaijan and Latvia, including within the international and regional organizations, as well as the European Union, Minister Elmar Mammadyarov added that two countries have a great potential to further the relations in political, economic, education, agriculture and other fields.

Minister Edgars Rinkēvičs underlined the importance of intensifying high-level mutual visits between the two countries for the expansion of contacts at various levels and holding political dialogue on a regular basis.

Minister Elmar Mammadyarov informed his Latvian counterpart about the latest status of the negotiation process on the settlement of the Armenia-Azerbaijan Nagorno-Karabakh conflict and emphasized that Azerbaijan highly appreciates the support of Latvia for the just position of our country on the resolution of the conflict in the bilateral and multilateral formats.

Edgars Rinkēvičs said that Latvia supports the peaceful resolution of the conflict based on principles of international law, especially those of territorial integrity and sovereignty of states.

At the meeting, views were also exchanged on the issues of mutual interest.

Press conference of the Foreign Ministers of Azerbaijan and Latvia was held after the meeting.

Later the Flower Laying Ceremony at the Freedom Monument took place with the participation of the delegations headed by both Foreign Ministers. The anthems of both states were played at the ceremony.