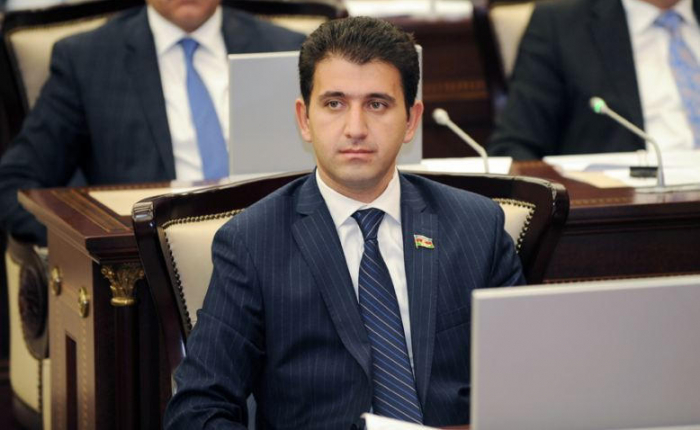 Ukraine is one of the oldest and most powerful European countries in the foreign relations of Azerbaijan, said Member of the Azerbaijani-Ukrainian parliamentary working group Naqif Hamzayev.

Historically, the two countries have had mutual relations. Both countries, which support each other during difficult times and in good times, still maintain this tradition with great enthusiasm. Ukraine was one of the first countries to recognize Azerbaijan's independence.

Thanks to the invaluable services of the national leader Heydar Aliyev, the relations between the two countries have risen to the level of strategic partnership. Successfully pursuing the mission of the great leader, President Ilham Aliyev's balanced pragmatic foreign policy has given impetus to the development of these ties and has steadily strengthened and broadened the strategic alliance.

The deputy noted that the characteristic feature of mutual relations is primarily friendship, and then mutually beneficial economic-trade, military-strategic and political cooperation. The official visit of Ukrainian President Vladimir Zelenski to Azerbaijan a few months after the victory is an example of the continuing Ukrainian-Azerbaijani relations.

There are a lot of potential and favourable opportunities for the development of bilateral economic relations between Azerbaijan and Ukraine. Ukraine is one of the main trading partners of our country. Most of Azerbaijan's energy exports to Ukraine are oil and oil products. The issue of the transportation of Azerbaijani liquefied gas to Ukraine was also resolved in 2011.

Azerbaijan, as a producer of energy resources, and Ukraine as a consumer and transit country, play an important role in ensuring energy security in several countries. One of the most important areas of mutual cooperation is to provide additional trade routes between the two countries. One of the most important regional cooperation projects in this regard is the International Trans-Caspian Transportation Route.


On the other hand, Azerbaijan's ability to produce and expand the number of competitive agricultural products, as well as increase its export potential to Ukraine, such as hazelnuts, fruits and vegetables, especially dates, tea, wine, grapes, tobacco, cotton fibre. Regularly organized in the capitals of both countries, the Azerbaijan-Ukraine Business Forums play an important role in this area.

Ukraine has always defended Azerbaijan's position in the Armenian-Azerbaijani conflict. The fraternal country has repeatedly declared its commitment to the settlement of the most serious problem of Azerbaijan, the Nagorno-Karabakh conflict, only within the territorial integrity of our country. The Ukrainian delegation was with Azerbaijan when it came to discussions about joining the organization in the European Union.

As for the discussion of the suspension of powers of the Ukrainian delegation to PACE, Azerbaijan objected to the resolution.

Documents to be signed in the framework of the Ukrainian President's official visit to Azerbaijan on political, humanitarian and economic cooperation will further strengthen ties between the two countries. This partnership, which is based on mutual interests, will also contribute to the consolidation of peace and stability in the South Caucasus and Eastern Europe.

In recent years, the high level of political relations between Azerbaijan and Ukraine and mutual cooperation in international organizations has been the focus of attention. The establishment of a trilateral format of regional cooperation between Azerbaijan and Turkey on the initiative and participation of our country, which acts as a guarantor of regional security and peace, has been met with an international agreement.

Realization of mutually beneficial projects between the countries, further strengthening of the parties in the region further enhanced the importance of the format of trilateral cooperation. We hope that with another initiative of our country, the format of regional trilateral cooperation between Azerbaijan and Turkey will be added to this list. This will also open up new opportunities to reduce overall security risks in the region.