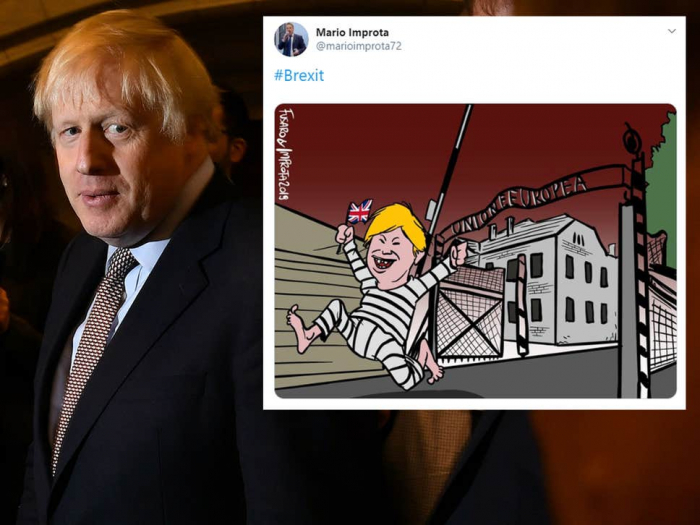 An Italian cartoonist has sparked outrage after depicting the European Union as Auschwitz and Boris Johnson as an escaping prisoner.

Artist Mario Improta posted the cartoon on his Twitter account alongside the comment “#Brexit” on Saturday – a day after the Conservatives won last week’s general election.

The drawing features the prime minister waving a union flag as he flees a concentration camp with the inscription “European Union” occupying the same position as the words “Arbeit macht frei”, do at the entrance to a Nazi death camp.

The comparison between the EU and a concentration camp immediately triggered a wave of criticism from politicians, Rome’s Jewish community and even some of the artist’s own Twitter followers.

The Auschwitz Memorial tweeted in Italian, noting that “’Arbeit macht frei’ was a cynical illusion the SS gave to prisoners of Auschwitz.”

It added: “Those words have become one of the icons of human hatred.

“It is painful for the memory of Auschwitz and its victims to see this symbol used and shamefully abused.”

Mr Improta has become well-known in Italy as the author of an educational campaign for Rome featuring mayor Virginia Raggi as a manga hero.

Ms Raggi distanced herself from the cartoon and ended the collaboration with Mr Improta.

After widespread criticism of the cartoon, Mr Improta modified it on Monday, replacing Auschwitz with a toilet and saying it was “not correct to identify the EU with a concentration camp”.

The incident came as Italy’s top football division, Serie A, was heavily criticised for artwork intended as an anti-racism symbol that depicted three apes.

The artist, Simone  Fugazzotto, defended his work and said: “I only paint monkeys as a metaphor for human beings. We turn the concept back on the racists, as we are all monkeys originally. So I painted a Western monkey, an Asian monkey and a black monkey.”