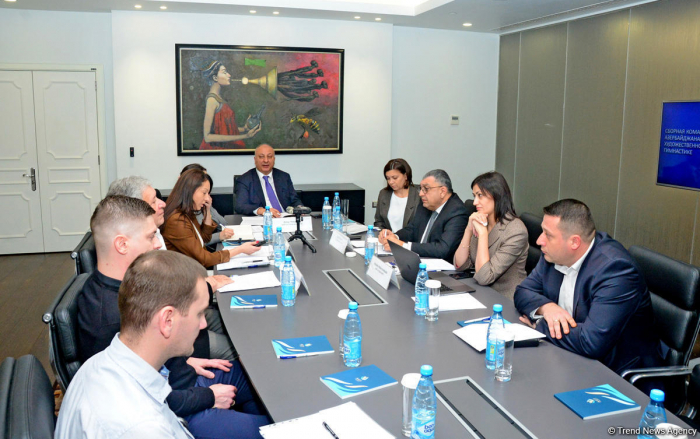 The 34th meeting of the Executive Committee of the Azerbaijan Gymnastics Federation (AGF) was held in Baku.

The meeting devoted to the results of the year was attended by AGF Vice President Altay Hasanov, members of the Executive Committee Mariana Vasileva, Rafig Behbudov and Rauf Aliyev, as well as AGF Secretary General Nurlana Mammadzada and the head coaches of the national teams on various types of gymnastics.

At the beginning of the meeting, the awarding ceremony was held for athletes Alexei Karatashev, Huseyn Abbasov and Magsud Magsudov, who won medals at the Trampoline World Championships held in Tokyo in 2019, and their coaches Adil Huseynzade, Vladimir Shulikin and Abdulla Gasimov.

Altay Hasanov congratulated the athletes and their coaches, and wished them further sporting success.

Then the issues on the agenda of the meeting were discussed.

Reports for 2019 by Nurlana Mammadzada and head coaches of Azerbaijan’s national teams on various types of gymnastics, as well as representatives of sports organizations closely working with the AGF were presented and adopted after discussion.

One of the important issues on the agenda of the meeting was the discussion and approval of the adapted technical regulations of the program of national competitions in accordance with the regulation of the International Gymnastics Federation.

Approval of the date of holding AGF general meeting to be held in early 2020 was also among the important issues on the agenda of the executive committee meeting.

In addition, AGF plans for 2020 were discussed.