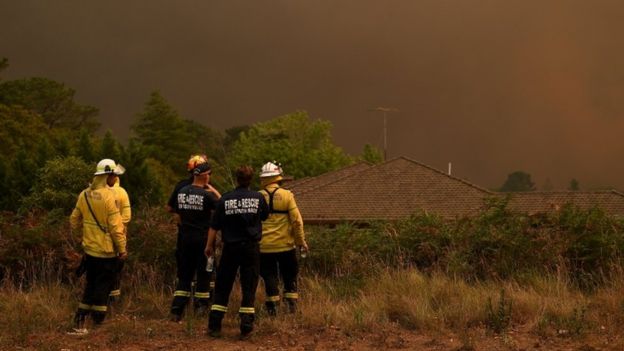 Catastrophic fire warnings are in place across the Australian state of New South Wales (NSW), where firefighters are tackling more than 100 blazes.

Authorities have urged Christmas travellers to delay their journeys as conditions threaten to intensify the bushfire crisis.

Rising temperatures and strong winds are expected to worsen fires across three states on Saturday.

Three blazes around Sydney are burning at an emergency level.

"We are asking everybody not to travel on roads anywhere near the vicinity of an active fire unless you absolutely have to," Gladys Berejiklian, premier of NSW, said at a news conference.

A combination of temperatures above 40C, low humidity and strong winds have worsened the struggle for the almost 10,000 emergency personnel mobilised to deal with the bushfires in NSW.

"They are the very worst of conditions. Given we have a landscape with so much active fire burning, you have a recipe for very serious concern and a very dangerous day," NSW Rural Fire Services Commissioner Shane Fitzsimmons said.

Two volunteer firefighters died on Thursday as they were tackling a large blaze near Sydney. Fires have also been ravaging the states of Victoria and South Australia, where two civilians died on Friday.

Australian Prime Minister Scott Morrison has faced criticism for going on holiday despite the severity of the bushfires.

Many Australians have accused Mr Morrison and his government of inaction on climate change.

Although climate change is not the direct cause of bushfires, scientists have long warned that a hotter, drier climate would contribute to Australia's fires becoming more frequent and more intense.