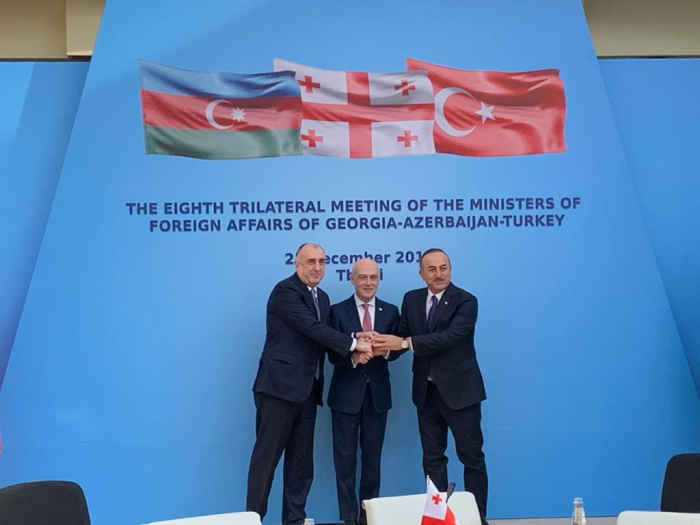 The foreign ministers of Azerbaijan, Turkey and Georgia held the 8th trilateral meeting in Tbilisi on Monday.

Ministers Elmar Mammadyarov, Mevlut Cavusoglu and David Zalkaliani discussed the current agenda of trilateral cooperation in various fields, with particular emphasis on cooperation in the field of transport and energy.

The meeting ended with the signing of Tbilisi Statement.

In the statement the Ministers,

Emphasized their commitment to the Trabzon Declaration, the Batumi Joint Communiqué, the Ganja, Kars, Tbilisi, Baku and Istanbul Statements adopted in the previous Trilateral Meetings of the Ministers of Foreign Affairs, as an important platform for both political dialogue and implementation of specific trilateral projects;

Expressed their satisfaction with the growing bilateral and trilateral cooperation among their countries and reaffirmed their strong commitment for further enhancing their collaboration based on the strategic partnership, good neighborliness, mutual respect and trust;

Reconfirmed the mutual respect and strong support for the sovereignty, territorial integrity and inviolability of internationally recognized borders of the three states;

In this regard, underscored that the existing conflicts in the region undermine peace, security, stability and economic development, thus status quo is neither sustainable nor acceptable, and require peaceful settlement without delay;

Reiterated the utmost importance of the lasting peaceful settlement of the conflict in the Georgian regions of Abkhazia and Tskhinvali region/South Ossetia and the conflict in and around Nagorno-Karabakh region of the Republic of Azerbaijan on the basis of universally recognized principles and norms of international law, particularly, sovereignty, territorial integrity and inviolability of the internationally recognized borders of states, as well as in accordance with relevant resolutions and decisions of the UN, the OSCE and the CoE; underscored the necessity of safe and dignified return of the refugees and internally displaced persons to their places of origin;

Reaffirmed the importance of trilateral cooperation in the defense sphere, emphasized by the MOU on Defense Cooperation of 2018 and underlined the necessity of further cooperation in defense industry, trilateral trainings, exercises and high level meetings. Therein, welcomed the Trilateral Meeting of Ministers of Defense in Gabala, on June 12, 2019;

Agreed to further strengthen economic-trade cooperation, to use the existing potential for promotion of investments and trade, as well as to support promotion of cooperation by implementing the joint projects and programs in the field of energy, transport, telecommunication, innovation, technology, industry, agriculture, tourism and environment;

Reaffirmed their determination of maintaining and further deepening interaction for the realization of energy projects of Southern Corridor, including joint promotion of the projects at the international level;

Expressed readiness to strengthen cooperation in the energy field and decided to encourage holding trilateral meetings of the ministers responsible for the energy sector;

Highlighted the importance of strengthening cooperation on the mutual experience sharing and the development of joint projects in the field of the electricity among relevant corporations of the three countries and emphasized importance of creation of trilateral electric-power market with the aim to improve cooperation in electricity sector;

Underlined the strategic partnership in the field of energy and reaffirmed their full support for TANAP, other important components of the Southern Gas Corridor (SGC), as well as for energy projects aimed at increasing volumes of natural gas transported from the Caspian region to Europe, while highlighting the role of Azerbaijan, Georgia and Turkey in assuring successful completion and functioning of those projects. In this regard, welcomed the Trans Anatolian Pipeline (TANAP) Inauguration Ceremony for European Connection held in Ipsala, Edirne on November 30, 2019;

Stressed the significant steps taken to strengthen the transit potential of the three countries situated on key international transit corridors, including the Trans Caspian East-West Middle Corridor, railway-based multimodal transportation corridor passing through Azerbaijan, Georgia and Turkey, as well as the efforts to integrate into the international transit system. Pointed out the importance of further enhancement of cooperation for implementation of new projects for development of hard and soft infrastructure, particularly digitalization of transport corridors to increase the transit potential;

Highlighting the key role of the Baku-Tbilisi-Kars (BTK) Railway and Marmaray project as a part of Iron Silk Road in facilitating competitive transportation between Asia and Europe In this regard, underlined the urgency to accelerate full completion of the BTK project for comprehensive operationalization, as well as to increase the volume of cargo and to start passengers transportation and to finalize the works for increasing the line capacity and eliminating the infrastructural and facility shortages in order to strengthen BTK Railway and Iron Silk Road;

Emphasizing importance of the cooperation in the information and communication technologies sphere, agreed to strengthen the efforts to develop the international digital connectivity between Asia and Europe, including the planning and implementation of the Trans-Eurasian Information Super Highway Project;

Underlining the significance of the cooperation within Black Sea Economic Cooperation Organization, reiterated their commitment to make BSEC a project-oriented organization and decided to work together to re-energize BSEC;

Emphasized the importance of existing good cooperation among the customs administrations of the respective countries, agreed on to work on the establishment of the Trilateral Committee on Customs Matters among the Ministry of Trade of the Republic of Turkey, the Revenue Service of Georgia and the State Customs Committee of the Republic of Azerbaijan;

Underlined the significance of enhancing and strengthening an attractiveness of a transportation economic corridor of the region and an importance of shaping the framework to facilitate the movement of goods via digitalization of customs documentation, electronic exchange of data;

Emphasized the importance of industrial cooperation through exchange of expertise, knowledge, technology and best practices among the three states by undertaking projects and programs are considered to strengthen the collaboration;

Underlined the importance of joint cooperation among Small and Medium Size Enterprises (SME) Support Organizations in the field of SMEs for sharing the knowledge and experience and increasing the cooperation of SMEs;

Underlined the importance of strengthening communication and exchange of information and experience in the fields of environmental protection, forestry, land use and management of water resources to maintain ecological balance in the region;

Stressed the significance to hold the next Turkey-Azerbaijan-Georgia Business Forum as soon as possible as a platform to create new opportunities for the business people;

Emphasized the successful reforms Georgia has undertaken in the direction of innovation and technology, including creating favourable ecosystem for knowledge-based and innovation-driven economy development and expressed the readiness to boost the cooperation among the three states;

Underscored the importance of the International Tbilisi Silk Road Forum held on October 22-23, 2019, which serves as an international platform for multilateral high-level dialogue among senior policymakers, businesses and community leaders to discuss the important trade and connectivity related issues, examine challenges facing countries along the Silk Road that connects East and West, and to find common solutions that have a strong impact on the region and the global economy. The Forum provides opportunities to discuss a full spectrum of issues related to Artificial Intelligence (AI), Trade, Transport and Energy in separate panel discussions, while also focusing on the private sector and investment opportunities in Georgia;

Agreed to explore and expand possibilities of further mutual cooperation in the field of health tourism;

Reiterated their firm commitment to strengthen their cooperation on the basis of relevant international instruments in the fight against terrorism, violent extremism and separatism in all their forms and manifestations, transnational organized crime, illicit trafficking in narcotic drugs and their precursors, arms, human trafficking, money laundering, crimes against cultural and historical heritage, cybercrime, disinformation campaigns and smuggling of migrants and their transnational security threats;

Underlined their determination to continue their efforts and support each other in fighting against terrorist groups threatening the security of the three countries;

Underscored the importance of cooperation in the humanitarian sphere, including culture, education, science, healthcare, youth exchange, tourism and sports, which will further expand people-to-people contacts among their countries and expressed their readiness to initiate and promote joint projects and events in these spheres;

Emphasized the need for enhanced cooperation among the three countries to increase efforts by relevant authorities for the preservation of cultural heritage in the region reflecting the heritage of ethnic and religious tolerance;

Expressed deep grief on the commemoration of the 75th anniversary of the deportation of the forcefully displaced persons sent into exile from the former Soviet Socialist Republic of Georgia by the Former USSR Government and positively assessed the steps undertaken by the Georgian authorities regarding the repatriation of FDPs;

Emphasized the important role of “Baku Process” as an important international platform for promoting intercultural dialogue, tolerance and respect for diversity;

Agreed to hold the next trilateral meeting in the Republic of Azerbaijan. 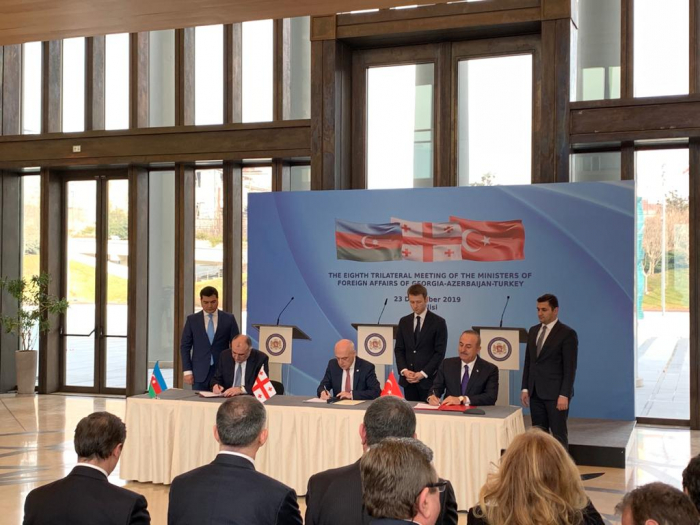 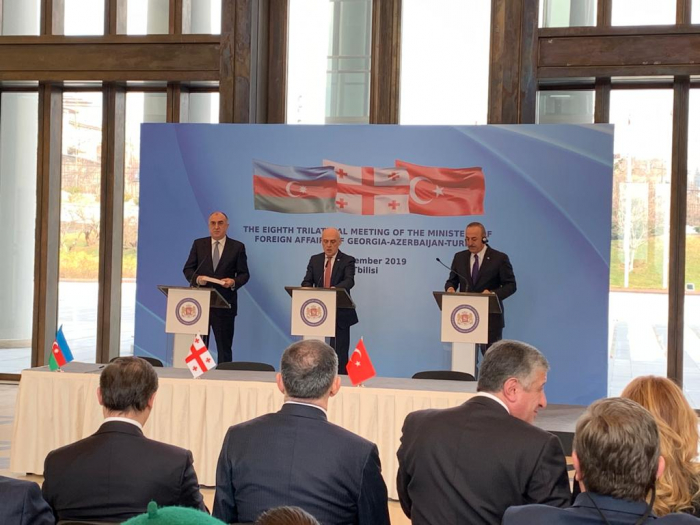 The trilateral meeting of Azerbaijani FM Elmar Mammadyarov, Turkish FM Mevlut Cavusoglu and Georgian FM David Zalkaliani is underway on in Tbilisi, Georgia.
The Ministers will discuss the current agenda of trilateral cooperation in various fields, with particular emphasis on cooperation in the field of transport and energy.

Within the framework of the trilateral ministerial, a joint statement will be signed.