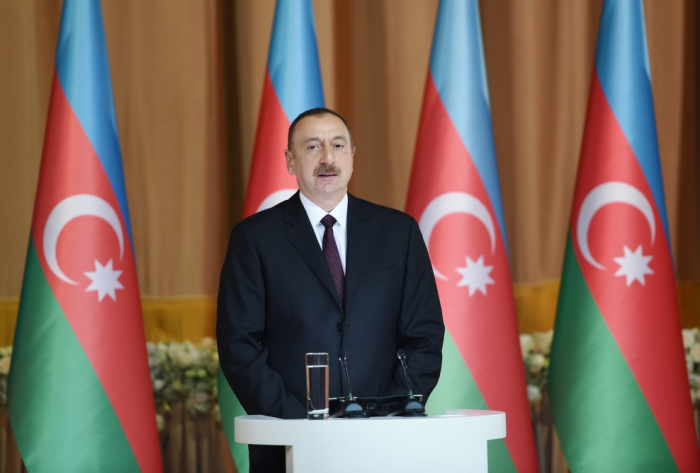 Sport is being promoted in Azerbaijan and the number of young people interested in doing sports is growing sharply, Azerbaijani President Ilham Aliyev said Dec. 25 at a ceremony dedicated to sporting results of 2019.

“Our sports results, successes, victories, as well as the state support of sports, the implementation of state programs, of course, are highly appreciated by international sports institutions as well,” the Azerbaijani president said. “It is no coincidence that the International Olympic Committee, the European Olympic Committee and international federations are giving a high assessment to our work.”

“Most importantly, sport is being promoted in Azerbaijan and the number of young people interested in doing sports is growing sharply,” Ilham Aliyev noted. “We are seeing and observing this. We should be grateful for this to our outstanding athletes. In general, I think that the work carried out in the field of sports inspires young people as well. We are pleased that Azerbaijani youths are showing great interest in sports.”

“Of course, the successes of our outstanding athletes raise our sporting glory even more,” the Azerbaijani president added. “From this point of view, this year has also been significant. Our athletes have won 775 medals at international sports competitions, including 271 gold. This allows us the opportunity to say that our athletes represented the country at international competitions with dignity. The national anthem of Azerbaijan has been repeatedly played and our flag has been raised in their honor.”

“Among the sporting achievements, I would like to specifically note the successes of our chess players, because this indicates that our youth is not only physically strong but also has a very high intellectual potential,” Ilham Aliyev said. “Our outstanding chess player Teymur Rajabov has won the World Cup. This is a historic event. Our youth chess team (under 16 years of age) has become the winner of the World Chess Olympiad. This confirms that the attention being paid to chess and the opening of chess schools in the regions in recent years are producing results.”

“The opening of chess schools is also included in the program of my numerous trips to the regions,” the Azerbaijani president noted. “It is possible to say that I have attended the opening of the majority of chess schools operating in our country. Unfortunately, in the late 1980s and early 1990s, the purpose of many of our chess schools was changed, their buildings were privatized and shopping facilities were opened there. Of course, this was a serious blow the then leadership dealt to our intellectual potential.”

“There are excellent chess schools in the districts that were opened on my instructions, so young chess players are being raised,” said the Azerbaijani president. “Of course, chess is a very famous and popular sport that enhances the intellectual potential of people and children. It is the young people who are attached to our spiritual values and possess great intellectual potential that will build our future, the successful future of independent Azerbaijan. Therefore, youth must be physically strong. It should have high intellectual potential, be attached to national values, to the homeland. Sport greatly enhances patriotic feelings.”

“Any sports victory, especially won at prestigious international competitions, increases national pride, national spirit in our country,” Ilham Aliyev noted. “Therefore, sport plays a very important role in the life of every country. This is why great attention has been paid to sports in recent years. After being elected President of the National Olympic Committee of Azerbaijan for the first time in 1997, I took steps aimed at developing sports in Azerbaijan and ensuring its mass scale, and today they are manifesting themselves.”

“Our greatest achievement in the field of sports is the victory won in the last summer Olympic Games,” Ilham Aliyev said. “For the number of medals, Azerbaijan finished in 14th place on a global scale. This is a historic victory and it is not accidental, because at the European Games held in Baku a year earlier, in 2015, Azerbaijan finished in second place in the teams competition. Therefore, our success in the field of sports is by no means accidental. Consistent work is conceptually carried out, sport veterans are treated with attention and care, the state awards them.”

“Sport experts work in excellent conditions, all conditions are created for athletes,” the Azerbaijani president noted. “Good opportunities have been created for their training, for them to participate in international competitions and to perform well. Currently, we have 45 Olympic sports centers in the regions alone. This year, I attended the opening of a center in the city of Beylagan. Two Olympic sports centers are ready for opening – in Yardimli and Tartar districts. The construction of two more Olympic centers is ongoing – in Goranboy and Neftchala.”

“The design work of the Olympic Center in Yevlakh has been completed and I am sure that its construction will begin in the near future,” Ilham Aliyev added. “Thus, having commissioned modern sports facilities, we can say that we have created conditions for athletes in all our districts. This is both a great opportunity for young athletes to train in sports clubs and for residents of cities and regions to do sports.”

“I would recommend that all our citizens do sports,” said the Azerbaijani president. “And not just once a week or a month, but on a regular basis. This is very useful, and everyone will feel it in their lives. I hope we will achieve this, because in all other areas my recommendations are being implemented. You probably remember that during the opening of new hospitals and medical facilities in regional centers and villages, I have repeatedly addressed the same question, recommending that every citizen undergo medical examination once a year to find out what their condition is like.”

“If there are initial manifestations of a disease, people should undergo treatment immediately and be cured,” Ilham Aliyev noted. “After the establishment of modern medical centers meeting the highest international standards in all our cities and regions, there is more interest in this process. Then we started to do this in an organized manner. For several years now, having carried out extensive educational and awareness work, we have created opportunities for people to undergo free examination. This year, more than 5 million Azerbaijanis underwent free medical examination. If a citizen who has been examined has any kind of a disease, he is immediately prescribed treatment.”

“If there are no opportunities for this in the conditions of the district, they are sent to Baku, so people stay healthy,” the Azerbaijani president added. “We have achieved this, and I can say that Azerbaijan is probably one of a handful of countries where the state creates conditions for its citizens to undergo medical examination. I am sure that my recommendation for everyone to do sports, depending on their physical capabilities, will also be implemented. Then everyone will see how useful this is.”

“I also recommend that our prominent athletes, who have enhanced the country's sporting glory, actively participate in this educational work,” Ilham Aliyev said. “The Ministry of Youth and Sports, the National Olympic Committee, sports associations and clubs should contribute to the promotion of sports. As you know, on my initiative, we have long been creating public recreation areas. From this point of view, Baku, which is a city of parks and squares, is already in one of the leading places in the world. Notice how many public recreation areas have been created in Baku recently.”

“All traditional parks left over from the Soviet era have been reconstructed at the highest level. New parks have been created on the site of industrial enterprises that had fallen apart,” the Azerbaijani president noted. “They were supposed to operate but actually damaged our environment. Following this, on my instruction, the installation of outdoor sports facilities began in the parks. The “Landscaped Yard” program is currently being implemented. Dozens of yards have already been landscaped in Baku.”

“There are sports grounds, including various simulators there,” Ilham Aliyev said. “Anyone has the opportunity to do sports outdoors now. Children and adults play football and other games, work out on simulators. This should take on a massive scale. Then our nation will be healthy. Therefore, turning to prominent athletes, I urge them to engage in this work. Our media should step up their activities in this direction.”

“True, there are programs related to aerobics and other physical activity on some of our television channels,” the Azerbaijani president added. “These programs show people what sport they should engage in and what exercises to do at home. But I think that this is not enough. Sport should become widespread. Not because we want to win more medals although this is also important, but to ensure that our nation is healthy, not sick.”

“People doing sports, the athletes present here can see this in their own example,” Ilham Aliyev said. “Despite a very busy schedule, I regularly and continuously do sports. There is perhaps no-one in Azerbaijan working more than me, but I find still time for regular sports and see the benefits of this. This is why I recommend it. I am sure that, based on these recommendations of mine, concrete proposals will be submitted in the near future and a broad program related to the promotion of sports will be drawn up.”

The head of state made a speech at the ceremony.

The event then featured an awards ceremony on 2019 sporting results.

The head of state presented certificates of individual pension of the President of the Republic of Azerbaijan to Alavardi Julfayev, Yavuz Eminbayli and Ramiz Hajiyev for their contributions to the development of sport in the country.

President Ilham Aliyev handed out documents of new flats to a group of athletes and sport figures in recognition of their high achievements in 2019.