US sanctions, protests and Karabakh: What we'll remember from 2019?- INTERVIEW 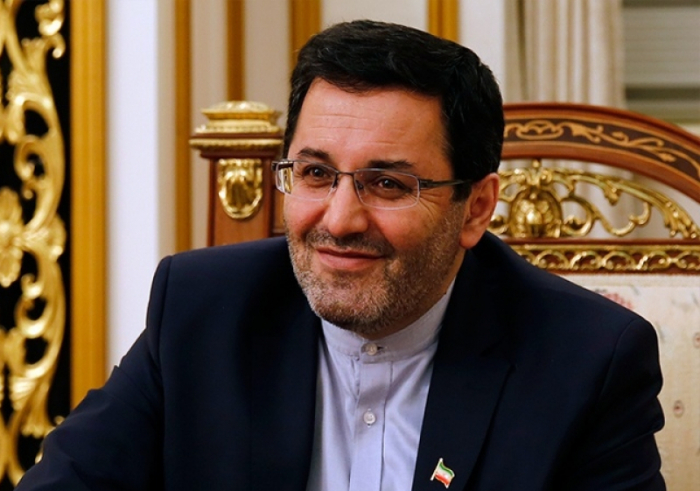 The year 2019 has been very successful for Azerbaijan-Iran relations, the Iranian ambassador to Azerbaijan, Javad Jahangirzadeh, said in an interview with AzVision.az.

Summing up the outgoing year, the diplomat said that historical similarities between the two countries in the field of culture, religion, language and literature made bilateral ties even closer.

He stressed that Iran was one of the first countries to recognize Azerbaijan’s independence.

“Both the government and the people of Iran want Azerbaijan to be safe and secure. There are some countries that are posing a threat, and of course, we are concerned about this. Azerbaijan’s joy is our joy, and its concern is our concern as well,” he noted.

Some countries that are interested to cause a confrontation between Iran and Azerbaijan are always doomed to failure, the diplomat stated.

He also spoke of close ties between the Iranian and Azerbaijani presidents Hassan Rouhani and Ilham Aliyev, respectively.

“Over the past six years, the presidents have met 12-13 times. This fact also indicates the high level of relations between our states and peoples,” the ambassador highlighted.

He pointed out that the trade turnover between the two countries amounted to $420 million in the first eleven months of 2019.

He went on to say that over 1,500 Iranian companies are currently operating in Azerbaijan. “So far, Iran has invested over $3.5 billion in Azerbaijan’s economy. Of course, Azerbaijan is a safe, stable country, so Iran can invest even more. At the same time, we want the Azerbaijanis to increase their investment in Iran.”

The ambassador also highlighted an increase in the number of Azerbaijanis visiting Iran.

“Nearly 35 per cent of Azerbaijanis travelling abroad falls on Iran’s share. In the first ten months of 2019, about 1,700,000 Azerbaijanis visited Iran. This figure may reach two million by the end of the year,” he added.

2019 was a significant year for Azerbaijan

The diplomat noted that the year 2019 was very significant for Azerbaijan as the country hosted a series of important events.

“Azerbaijan is currently chairing the Non-Aligned Movement (NAM). Presidents and ministers of a number of countries took part in the recent NAM Summit in Baku. Azerbaijan’s increasing significance in the region is, of course, important for us,” he said.

Asked about the ongoing reforms in Azerbaijan, Ambassador Jahangirzadeh said: “Azerbaijan is one of the few countries that have been developing rapidly thanks to the reforms carried out over the past 15-16 years. In addition to the economic sector, the Azerbaijani president is implementing reforms in political, cultural and scientific spheres. All this has a positive effect on regional countries.”

Iran-Azerbaijan ties are an example for other countries

The ambassador noted that politicians from both countries maintain their relationship in the interests of the two nations.

“Iran-Azerbaijan ties are not directed to any country. Both countries should take advantage of the existing opportunities. For example, Iranian goods are delivered to the Russian market thanks to Azerbaijanis living in this country, and this is a great opportunity. We see the North-South Corridor as a great opportunity for us. This corridor is for the benefit of not only two countries, but also India, China and Europe,” he said.

The diplomat went on to say that the two countries have managed to implement the majority of the agreements on energy, industry, agriculture, health, science and startups.

Iran and Azerbaijan are currently working on facilitating the cross-border trade and increasing its volume in 2020, said Ambassador Jahangirzadeh.

He stressed that next year the two countries will also prioritize increasing mutual investments, ensuring industrial development and finding a third market.

“As for a third market, we believe that Iranian products can be exported to other countries [both European and Russian markets] through Azerbaijan and vice versa. We have already launched some work in this regard, but it is necessary to strengthen and complete this process,” the ambassador added.

U.S. sanctions on Iran and its possible impact on Tehran-Baku ties

Iran knows that Azerbaijan’s policy is aimed at maintaining its relations with the neighbouring countries, noted Ambassador Jahangirzadeh.

“Of course, we don’t want Azerbaijan to be harmed because of Iran. All of our contracts are formal and legally binding, and they are implemented. Iran-Azerbaijan relations are not directed against any country, but rather bring peace and tranquillity to all neighbours,” he said.

Protests against fuel price hike in Iran and its consequences

He stressed that Iran is a great country and freedom of expression is always respected there. “Fuel price tripled in Iran, and citizens expressed their protests against this in some cities. However, some forces’ efforts to stir up trouble in Iran failed.”

The ambassador recalled that the planned trilateral meeting between the Iranian, Azerbaijani and Russian presidents was postponed.

“I believe that this meeting will definitely be held in 2020. It is also planned to hold the next trilateral meeting between Iranian, Azerbaijani and Turkish foreign ministers next year.

“It will take many years to resolve this conflict by peaceful means,” the diplomat said, retreating Iran’s support for a negotiated solution within Azerbaijan’s territorial integrity.

He underscored a need for a political will in order for the parties to the conflict to reach a common point.

“Iran’s Foreign Ministry has repeatedly expressed its readiness to contribute to the settlement process. In this process, Iran is more important than other countries, because it is the neighbor of both Azerbaijan and Armenia. We have also good relations with Nakhchivan. For us, Azerbaijan is not only a neighbor but a close, brotherly and friendly country. We are very interested in the settlement of this conflict,” the ambassador added.