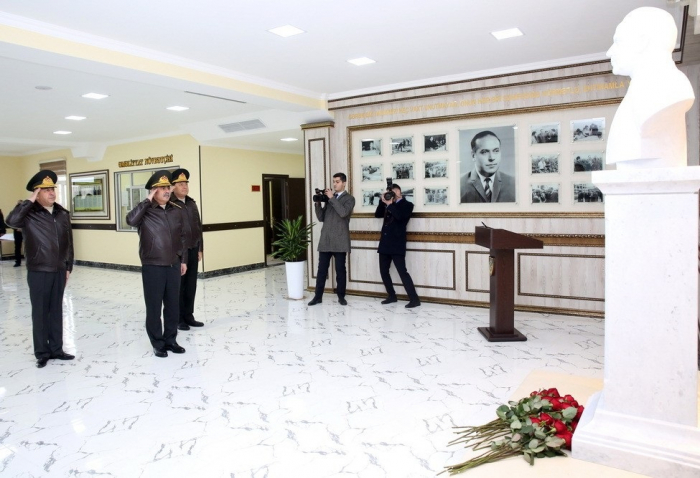 The defense minister first laid flowers at the bust of national leader Heydar Aliyev in the new headquarters of a military unit, the ministry told AzVision.az.

Minister Hasanov then viewed the conditions created at the new headquarters.

The three-storey headquarters building consists of 70 office and administrative premises. All premises are equipped with furniture and communication lines. The building has a centralized heating system, power lines, water, and gas supply.

Landscaping and gardening work was carried out, as well as 2500 different tree species were planted on the territory.

It was reported that more than 35 administrative and office premises of the headquarters have a centralized heating system, electricity, water, and gas pipelines, communication lines, and are also equipped with the necessary furniture and equipment. Landscaping and gardening work was carried out, as well as 650 different tree species were planted on the territory.

The defense minister was informed about the two-story medical point. It was reported that the medical point equipped with modern medical equipment has a reception department, emergency room for emergency medical care, functional diagnostics room, duty doctor room, doctor’s room, dental room, treatment room, and other premises, as well as wards, warehouse, a pharmacy, and a mess hall. Landscaping and gardening work was carried out on the territory.

After familiarization, Minister Hasanov gave instructions in connection with the improvement of the service and social conditions of servicemen.

The minister also congratulated the military personnel on the occasion of 31 December – the Day of Solidarity of World Azerbaijanis and Happy New Year.