Thousands protest in Pakistan over U.S. killing of Iranian commander 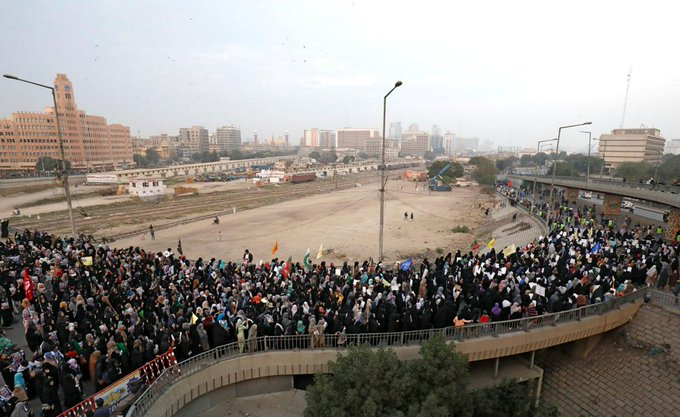 Protestors clashed with police in Pakistan’s southern port city of Karachi on Sunday, as thousands of demonstrators attempted to march toward the U.S. consulate to protest the killing of Iranian military commander Qassem Soleimani.

Soleimani, a powerful Iranian military commander and the architect of Iran’s spreading military influence in the Middle East, was killed in a U.S. drone strike in Iraq on Friday.

In Karachi, thousands of Shi’ite protestors, including women and children, carrying images of Iran’s Supreme Leader Ayatollah Ali Khamenei, as well as of Soleimani, marched and chanted slogans of “Death to America,” and “Death to Israel.”

The protest was organized by a diverse group of Shi’ite Muslim organizations.

Police were able to push protestors back and prevent them from getting beyond the barricades. Following a brief period of tension on Sunday evening, the demonstration was called off.

Iran, with a Shi’ite Muslim majority, enjoys a large support base in Pakistan, its neighbor to the east. Though Pakistan is a Sunni Muslim-majority country, it has a fairly large Shi’ite population.

“Pakistan should not in any way allow its soil to be used against Iran,” a senior cleric, Shahanshah Naqvi, said while addressing the protest rally.

A smaller rally was also held in the capital, Islamabad, where protestors burnt U.S. and Israeli flags.

It dispersed without any violence.

Earlier, the spokesperson of Pakistan’s Army told local media the country would not allow its soil to be used against anyone, referring to speculation about an imminent military standoff between the United States and Iran.

He quoted Pakistani Prime Minister Imran Khan and the Army chief as saying they wanted a peaceful resolution to all disputes.