Why are CEOs paid so much?- iWONDER 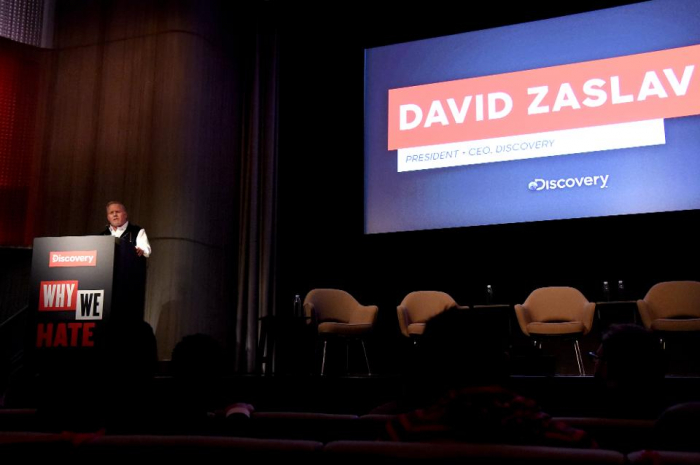 In New York City, where I live, it isn’t uncommon to walk by buildings of some of the world’s wealthiest companies with a row of homeless individuals living in abject poverty right below it. Looking at these two extremes in tandem makes the injustice at once heartbreaking and infuriating. Why are some CEOs paid exorbitant amounts when other citizens aren’t even afforded what should be the basics of life?

In today’s political and social discourse, a frequently advanced argument is that exorbitantly high CEO pay is the cause of many of America’s inequality problems. It is often cited as the villain in America’s income inequality tragedy. Greedy CEOs, the narrative goes, are pocketing productivity gains from their firms.

I am not exempt from wondering why CEOs are so handsomely paid. What do they do all day that deserves such hefty pay?

What Exactly Does A CEO Do?

1. Look Forward, Reason Back: “Not everyone can be a great visionary―a quality we often associate with luminaries such as Gates, Grove, and Jobs. But any CEO or strategist can learn to ask better questions and become a disciplined curator of ideas, choosing the most powerful insights about the future, whether they originate within the company or come from outside….Gates, Grove, and Jobs took the next critical step of reasoning back to connect their long-term perspectives to immediate actions. All three knew that, in order to make that five-year vision a reality, you must have a plan for today, the next six months, and the six months after that.”

2.Make Big Bets, Without Betting the Company: “Rather than go for easy wins, they chose to swing for the fences―whether that meant competing directly with an industry leader, overturning industry norms, or creating a brand new product category.” A recent article in MIT Sloan Management Review by W. Chan Kim and Renee Mauborgne of Blue Ocean Strategy, Nondisruptive Creation: Rethinking Innovation and Growth

3. Build Platforms and Ecosystems―No Just Products: “They focused not just on building products, but on creating and controlling platforms for third-party innovation and supporting ecosystems of complementary products and services.”

4. Exploit Leverage and Power―Play Judo and Sumo: “They were not shy about making full use of their strengths and resources, which ranged from legal action to locking up distribution and exploiting deep pockets. We call moves that rely on this kind of power sumo tactics. But all three CEOs were also adept at judo tactics, which leverage cleverness and speed more than strength, such as staying under the radar and working with competitors until the moment is ripe for an attack. Their ability to draw on both sets of skills made them especially fearsome competitors.”

5.  Shape the Organization around Your Personal Anchor: “None of the three tried to be a perfect leader or a prototypical general manager. Instead, while always keeping the bigger picture in mind, they dove deeply into the details they cared passionately about and relied on trusted managers in areas of secondary concern. By their example, they taught others in the organization what to focus on and why….They constantly seek out new sources of expertise, especially in areas where they were weak, often searching widely throughout their companies for the people who had the greatest knowledge, regardless of the seniority of rank.”

To execute the five elements listed above in today’s complex world, a CEO needs a very strong grasp of myriad subjects:

Who, today, sits at the nexus of this skillset? The answer is no one.

Corporate strategy groups are the manifestation of the misunderstanding. A company has already lost if the CEO outsourced its strategy development to a separate group. And in that case it would be fair to ask what, exactly, is that CEO doing?

Strategy, especially as it becomes increasingly complex, should always, always sit with the CEO. Strategy, in many ways, is making sense of all these different elements and putting them into a cohesive outlook but not necessarily being the expert in any one area.

A recent survey published by the Conference Board, surveying 750 CEOs across the U.S., Asia, Europe, and LatAm, highlighted the main concerns as we move into 2020, both internal and external. 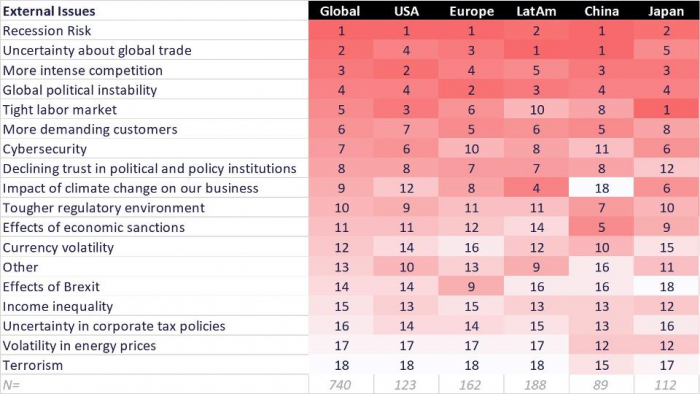 2020 external concerns of CEOs as surveyed by The Conference Board

Recession risk topped the list of external risk factors, and the risk that is most frequently publicized as a primary concern. While these risks inevitably weigh on the mind of a CEO or anyone in business, the bulk of the work—and what’s a lot more telling—are the internal concerns on CEOs’ minds. 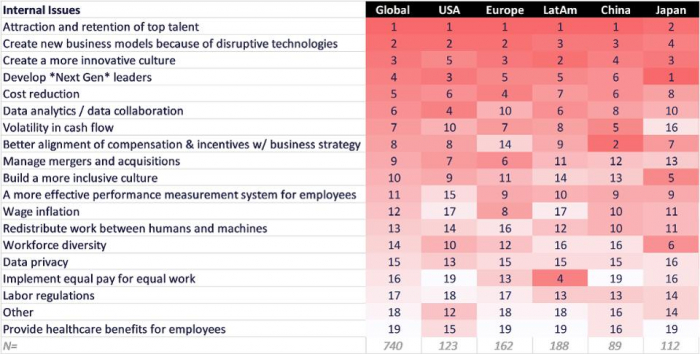 2020 internal concerns of CEOs as surveyed by The Conference Board

Many of these concerns are table stakes. Attracting and retaining talent is part of the job! Or take number two, “Create new business models because of disruptive technologies.” This is the job, running a business that creates value. I’m not sure I consider many of these as concerns rather than as a natural part of the job description. It isn’t easy to do, which, in theory, is what makes the job fun. The job of CEO is hard. But does this list justify the high pay?

One argument put forward has been that as the complexity of the role and list of skills required to be CEO becomes longer, the list of people who can successfully fulfill the role becomes even shorter. Supply and demand would dictate, then, that the shortage in the supply of people who can successfully do the job is driving up the price of CEO labor.

I have a different argument. A really strong CEO is able to filer out the key issues and not to get weighed down by all the world’s concerns; instead it’s to focus on what is most important? And what will have the largest impact?

If we go back to the list of risks, when we look at the concerns of CEOs, the entire list can be summarized in three sentences:

To accurately price CEO pay, we have to first figure out what they are responsible for. Especially in this day and age, CEOs are unjustifiably glorified: Look at all these concerns they have to deal with! That narrative needs to be stripped apart and disembodied before we can return to equitable pay. The 21st century CEO is someone who doesn’t buy into that story, either.