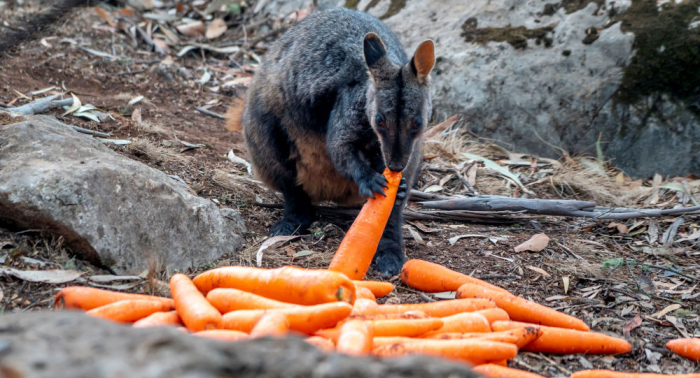 With the worst wildfires seen in many years, not only massive portions of Australia have been destroyed since its fire season began in September, but Australian animals as well. The data on the loss of animals is frightening. Some experts estimate that more than 1 billion animals have died since the beginning of the fire season.

In attempts to save starving animals trapped in Australian wildfires, the government used helicopters and airplanes to fly over bushland and canyons to feed them by dropping sweet potatoes and carrots down from the skies.

The environment minister for New South Wales, Matt Kean, said on his Twitter that staff dropped thousands of kilograms of food.

Brush-tailed rock-wallaby were considered endangered even before the wildfires began. Now the animals are one of many Australian species under serious threat of extinction following dramatic developments in the country.

Earlier, search dogs were deployed by Australian rescue teams to save koalas in bushland and canyons.

Earlier, Australia’s Prime Minister Scott Morrison said that at least 25 people have died, 2,000 homes have been destroyed, and 15 million hectares have been scorched across the country since the wildfires began in September. The state of New South Wales (NSW) has been particularly hard hit. Some 1,000 homes were destroyed in NSW only this January. Authorities have issued emergency warnings as temperatures are expected to soar to 40 degrees Celsius and strong winds will hamper firefighting efforts.