Ilham Aliyev: 2020 will also be successful for Azerbaijan 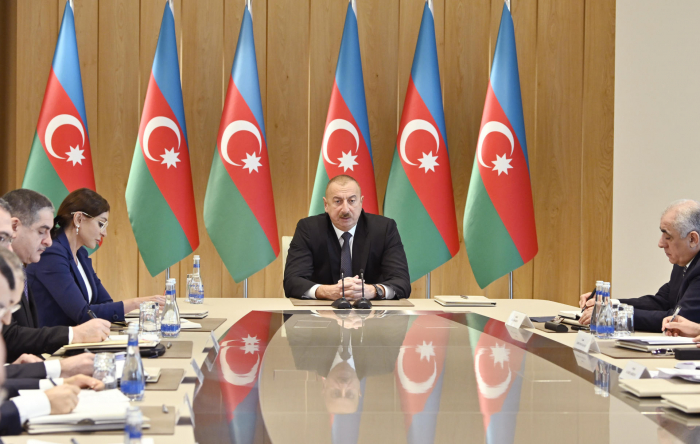 The stability in Azerbaijan, the strengthening of the country’s international positions and a number of international events held in the country contribute to the development of tourism, President Ilham Aliyev said at a meeting on the results of 2019, AzVision.az reports.

The head of state recalled that the Trans-Anatolian Natural Gas Pipeline (TANAP) was commissioned last year.

“I consider the commissioning of TANAP a historic achievement since this pipeline is the main part of the Southern Gas Corridor.  After the TANAP agreement signed in 2012, the development of Shah Deniz-2 gas condensate field was authorized. If TANAP had not been signed, the development of Shah Deniz-2 would not have been launched, and today we would not have been able to obtain this additional volume of gas. This could cause great problems,” he stated.

President Aliyev stressed that the implementation of the remaining fourth part of the Southern Gas Corridor is successfully going on.

“The implementation of the Trans Adriatic Pipeline (TAP) has already exceeded 90 per cent. I’m confident that this year we will also mark the commissioning of TAP at the scheduled time,” he added.

The president pointed out that all the work is done, including Azerbaijan’s positions in the international arena, the establishment of friendly relations with many countries, the stability prevailing in the country gave a powerful impetus to the development of tourism.

“I have repeatedly said that the development of tourism is not limited only to historical monuments or to some issues that attract attention and interest. Today, in the world there is no region where there are no problems, and very serious ones. As I already noted, the influx of tourists is in decline in countries where wars, confrontations, coups, mass protests, police violence, violation of human rights exist,” he noted.

The head of state highlighted that the stability in Azerbaijan, the strengthening of the country’s international positions and a number of international events held in the country contribute to the development of tourism.

“Last year, Azerbaijan welcomed a record number of tourists – 3,170,000. According to the information provided to me, foreign tourists spent 1.26 million manat in Azerbaijan only via their bank cards. In general, we must take into account that tourists come mainly from neighbouring countries, and cash payments prevail there, as we do. A total calculation shows that foreign tourists spent as much as 4.3 billion manat in Azerbaijan,” he added.

“Of course, we earn the main currency from the sale of oil and gas. Today, export growth in the non-oil sector by 14 per cent provides the flow of currency from this sector as well. We will keep focusing on tourism development,” the president added.

The head of state that he can spend hours talking about the successes achieved in 2019. “I just brought to Azerbaijani citizens the issues that I consider to be the priority ones. I want to reiterate that we will also follow this path of success in 2020. I’m confident that the year 2020 will also be successful for our country,” he concluded.