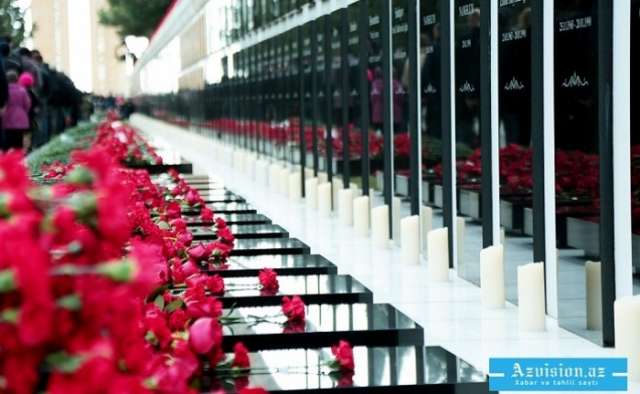 The Caucasian Muslims Office (CMO) has spread an appeal in connection with the 30th anniversary of the January 20 tragedy of 1990, AzVision.az reports citing Trend.

"We are on the eve of the 30th anniversary of the January tragedy, immortalized in our historical memory as a day of deep sorrow, but also of national pride and a school of heroism," reads the appeal. "The military aggression carried out by the Soviet army against the Azerbaijani people on the night of January 19-20, 1990, will remain in history as one of the most brutal crimes against humanity."

"January 20, the memory of which will live forever in our hearts, has become not only a tragedy, but also a symbol of readiness for self-sacrifice and indestructible will in the struggle for the national independence and freedom of our people," the Caucasian Muslims Office noted. "The tragedy of January 20 was the first test and moral victory on the way to independence, the restoration of our national moral and religious values."

"Our people, subjected to punitive measures of the army that was armed to the teeth, wasn’t broken, didn’t lose determination to gain independence, on the contrary, its righteous voice sounded even louder," reads the appeal. "When the fate of Azerbaijan, the very existence of the state was in question, the brave son of our people, wise statesman Heydar Aliyev, who, together with his family members, came to the Permanent Mission of Azerbaijan in Moscow, was the first to raise his voice, demonstrating solidarity with his people."

"Expressing strong protest against this bloody campaign committed by the leadership of the USSR, angrily condemning the organizers of the bloody crime, describing this event as a provocation contrary to law, democracy and humanism, Heydar Aliyev, as a national leader, inscribed the first historical page of the then-undeclared independence of Azerbaijan," said the Caucasian Muslims Office.

"Proper assessment of these events was given after the return of Heydar Aliyev to power," reads the appeal. "Thus, this tragedy was regarded as an act of military aggression of the USSR against the Azerbaijani people."

“In Baku, the religious leader Sheikh ul-Islam Allahshukur Pashazade, despite serious pressure, threats and restrictions, in an open letter to former USSR President Mikhail Gorbachev, full of anger and condemnation, expressed tough and principled attitude to these events,” reads the statement.

“The tough stance of our political leader and spiritual leader inspired, mobilized and united the people,” the statement said. “More than a million people, not fearing persecution and even death, came to the main square of the city and buried the bodies of martyrs who fell in the struggle for freedom of the Motherland.”

“Among those who died for independence, national statehood and territorial integrity of Azerbaijan were citizens of various faith and nationalities, and the heads of various religious communities of the country participated in the burial ceremony along with everyone,” reads the statement. “Thus, the tragedy of bloody January 20 went down in the history of the independent Azerbaijan state as a glorious and heroic page of our people, an example of national unity and solidarity.”

“From the first days of the bloody events, the Caucasian Muslims Office made every effort to convey to the world community, influential international organizations, the truth about the tragedy of January 20, which is a continuation of the Karabakh conflict so that our fair cause would be supported, the crime committed would be condemned as a merciless inhuman punitive measure,” the statement noted.

“The world must admit that the Karabakh conflict, the Khojaly genocide and the crimes of January 20 are among the most bloody terror attacks, serious crimes of totalitarianism against humanity in the 20th century,” reads the statement. “Unfortunately, due to a biased approach in the world in the spirit of double standards, some countries and international organizations prefer to keep silent about the problem.”

“Azerbaijani people have the full moral right to ensure that those responsible for the killings - Mikhail Gorbachev and his accomplices, are brought to trial on the basis of international laws, so that cruelty, hypocrisy, atrocities and the true intentions of criminals are fully disclosed to the world community,” the statement said.

“Azerbaijan was unfairly accused and this must be openly said,” the statement said. “An attempt was made to present the incident as a national and religious conflict. The struggle of our people was presented to the world community as Islamic fundamentalism and extremism."

“In accordance with the document, the path to freedom and independence has always been hard and it is impossible to go through it without victims,” the statement said. “In this case, January 20 must not be a day of sadness and sorrow, but a remembrance day of martyrs, a day of instilling the spirit of heroism and patriotism in people, in particular, youth. Martyrdom is the highest measure of faith, patriotism, the struggle for convictions and ideas.”

“Today, the most worthy tribute to the memory of martyrs is independence, the growing power of the state, the prosperity of our Motherland and the well-being of people,” the statement said. “We believe that our people will achieve their goal with the help of Allah and under the guidance of respected Azerbaijani president, Supreme Commander-in-Chief Ilham Aliyev. After our native lands are free from occupation, holiday prayers will be performed for the glory of victory throughout Azerbaijan, God willing."

“The Caucasus Muslims Office expresses deep condolences to all families of martyrs of January 20 tragedy, as well as to the families of all martyrs who sacrificed their lives for the integrity and national independence of our country,” the statement said. “The sacred duty to Allah and the Homeland of every citizen, including our believers, is to mark the anniversary of the day of national mourning and a symbol of national unity.”

“The Caucasus Muslims Office considers it important to read the text of this appeal on January 20 in all mosques and religious ceremonies, to tell about the realities of January 20 tragedy, verses from the Quran and to revere the blessed memory of our martyrs by prayers,” the statement said.

"May the souls of martyrs rest in peace!" the statement said.