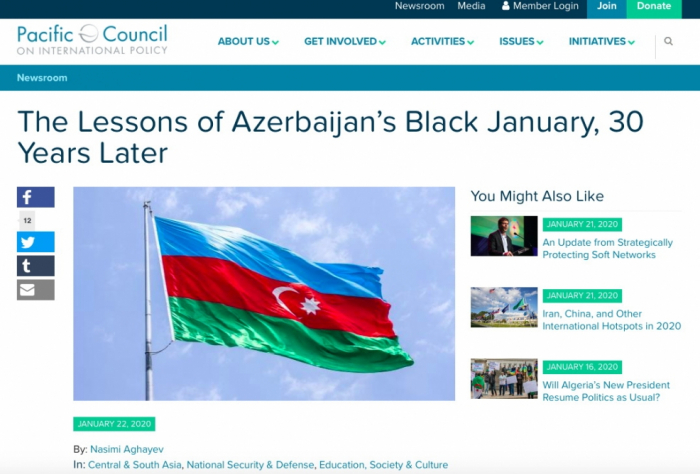 The article reads: “Thirty years ago as of last Monday, on January 20, 1990, over 26,000 Soviet troops invaded Azerbaijan’s capital city of Baku, raining gunfire onto neighborhoods and public streets, in a brutal tragedy that became known as "Black January."

The Soviet Union was near collapse, and the Azerbaijani people’s struggle to reestablish freedom and independence after 70 years of Soviet occupation and oppression was Mikhail Gorbachev’s excuse for using tanks to target innocent Azerbaijani civilians, killing hundreds of men, women, children, and the elderly, and injuring thousands.

The diversity of Azerbaijani victims serves as a gruesome metaphor for the stark contrast between an intrinsically democratic Azerbaijan and the Soviet terror that sought to crush our freedom aspirations—nearly every religious identity was represented in the death toll. Baku is an embodiment of diversity today as it was in 1990, and we lost Muslim, Jewish, and Christian lives that day, to the violence of a regime that opposed us all.”

Unfortunately, we see many parallels to this level of brutality in our world today, where incidents of violent extremism and hate-driven terror have materialized virtually everywhere, from war-torn nations to major cities such as Paris and New York. It was only weeks after a special event hosted by Nessah Synagogue, honoring a delegation of Azerbaijani survivors from Nagorno-Karabakh, that an anti-Semitic criminal vandalized this beautiful synagogue and destroyed precious Torah Scrolls, a tragic reminder to us in Los Angeles how close to home this threat truly is.

We can see, in the context of our modern crises, that there are meaningful lessons to consider, especially from the aftermath of Black January. Once the Soviet troops had exhausted their thirst for bloodshed, they imposed a mandatory curfew, promising harsh punishment if the curfew was violated. Yet in total opposition to their terror, in the immediate aftermath of the massacre, over 1 million Azerbaijanis took to the streets in a historic and unparalleled act of solidarity and mourning. Men, women, children; Muslims, Jews and Christians together shut down the streets and the city of Baku for 40 days, as a message of our unbreakable commitment to freedom, one so powerful and dear to our hearts and our nation that even a brutal massacre could not destroy it.

As a result, just a year and a half after the massacre, Azerbaijan restored its freedom from the Soviet Union, becoming one of the first Soviet republics to declare its independence, leading to the rebirth of the Republic of Azerbaijan.

Although the demonstration of solidarity following Black January was remarkable, it was highly consistent with how Azerbaijan, as a nation and as a people, has responded to hate and brutality in many instances throughout history. For thousands of years, Azerbaijan has stood up to violence against Jews and other minorities in the surrounding regions, providing them safe haven, permanent residence, and security.

During World War II, approximately one fifth of the Azerbaijani population fought against Hitler and the Nazis, and over 400,000 Azerbaijanis lost their lives in that noble fight. The courage and unwavering commitment to harmony and tolerance has carried us through many storms and continues into today to protect and strengthen our nation. That courage and commitment continues to serve as an example to the world of what is possible when people from different cultures and faiths work together toward the common goals of peace and freedom.

It is difficult to fathom that such an unimaginable display of criminal warfare against civilians happened only 30 years ago, but it is important, now more than ever, that we face the lessons of history so that we can manage the threats and tragedies that are happening today.

My hope is that the response following Black January, the immense solidarity and fortitude, and most importantly, the shared sense of community across religious and cultural affiliation, will help to inspire communities today that are also facing cruelty and violence elsewhere in the world.”