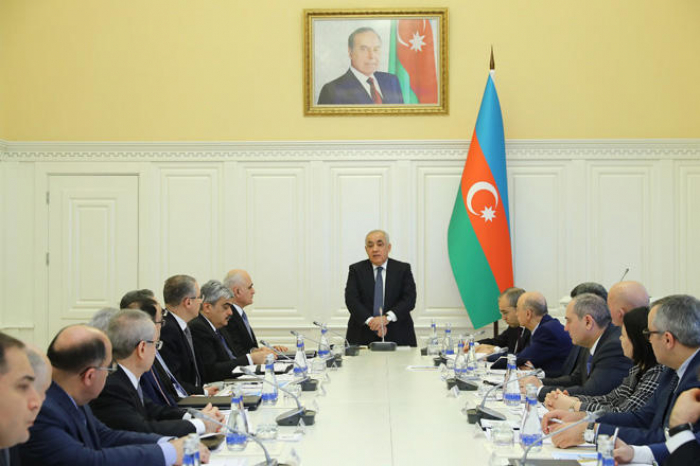 The tasks set by Azerbaijani President Ilham Aliyev in connection with the application of compulsory medical insurance were discussed at a meeting in Azerbaijan’s Cabinet of Ministers, AzVision.az reports Jan. 25.

The meeting was held under the chairmanship of Prime Minister Ali Asadov.

“It was brought to the attention that, along with raising public awareness, marketing work should also be carried out, and the appropriate measures should be taken to ensure citizens’ interest in property insurance,” Ali Asadov said. “Property insurance is in the interest of citizens. By insuring immovable property in a compulsory manner, citizens will minimize the risks in emergency situations.”

Noting the formation of the legislative framework in connection with compulsory insurance, Asadov added that the head of state prefers property insurance to be implemented as part of mutual interests of citizens and insurance companies.

In this regard, raising public awareness is an important factor, said the prime minister.

Executive Director of Azerbaijan’s Compulsory Insurance Bureau Rashad Ahmadov informed about the work carried out in the insurance market. He said that special video footage has been prepared for raising public awareness, distributed in the media and social networks.

He emphasized the importance of educational institutions being covered by measures for raising public awareness and noted that measures will be taken in this area as well. Speaking about car and property insurance, Ahmadov said that the use of innovative systems is on the agenda.

Under the new system, a public-private sector cooperation model will be used that is governed by non-profit principles and ensures private sector participation, said the minister.

Karimov noted that it is planned to introduce the first agricultural insurance product to the consumers by the end of 2020.

Then the presentation entitled “Application of agricultural insurance” was held by Azerbaijan’s Agriculture Ministry.

Azerbaijan’s Economy Minister Mikail Jabbarov noted that property insurance should also apply to state property, adding that there are great opportunities in this sphere. The minister also said that it is necessary to find ways to increase mutual trust of citizens and insurance companies, as well as for greater interest of citizens in this matter.

In turn, Azerbaijan’s Finance Minister Samir Sharifov noted that over the past 10 years, public funds worth 970 million manat (570.5 million) have been spent to help citizens affected by natural disasters.

The Minister for Emergency Situations Kamaladdin Heydarov emphasized that there is a need to amend the legislation accordingly.

Deputy Minister of Justice Azar Jafarov said that the ministry is ready to directly participate in all processes necessary in the legislative sphere.

Delivering speeches at the meeting, Head of ASAN Service (State Agency for Public Service and Social Innovations under the President of Azerbaijan) Ulvi Mehdiyev, Deputy Emergencies Ministry Rafael Mirzoyev and others spoke about the work being done and the tasks set.

Summing up the meeting, Azerbaijani Prime Minister Ali Asadov noted the importance of accelerating the work envisaged in the “Plan of measures for the development of insurance sector in 2019-2021”, approved by the Cabinet of Ministers on May 21, 2019, and submitting a regular report in this regard.

The prime minister said that the implementation of resolutions adopted in the field of agricultural insurance should always be in the spotlight, adding that the work in this area has been accelerated.

Asadov instructed the heads of the relevant structures to successfully complete the tasks, and said that after three months the results of the work done will be discussed again.