US ambassador to Azerbaijan talks on Kobe Bryant's death 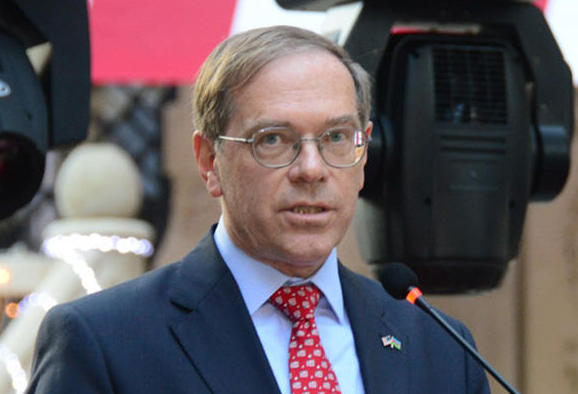 Kobe Bryant's death deeply saddened me, US Ambassador to Azerbaijan Lee Litzenberger said at an event dedicated to the creation of the Jr.NBA Azerbaijan League, AzVision.az reports.

Kobe Bryant had tremendous talent, the US ambassador said, noting that the basketball world has lost its legend.

The event was held following an agreement between the NBA (National Basketball Association) and ABF (Azerbaijan Basketball Federation).

The US ambassador said that the creation of the Jr.NBA Azerbaijan League is an indicator of the great popularity of basketball around the world. Litzenberger emphasized that basketball is the second most popular sport in the world.

In total, the number of fans around the world is two billion people and millions of people play it, the ambassador emphasized.

Lee Litzenberger expressed hope to see Azerbaijani athletes in the NBA in the future.

The US ambassador noted his satisfaction over the creation of the Jr.NBA league in Azerbaijan and expressed readiness to support the development of basketball in Azerbaijan.

Legendary LA Lakers guard Kobe Bryant tragically died in a helicopter crash on Jan. 26, 2020. The helicopter carrying Bryant, his 13-year-old daughter Gianna and seven others, crashed into a mountain 50 kilometers from Los Angeles.