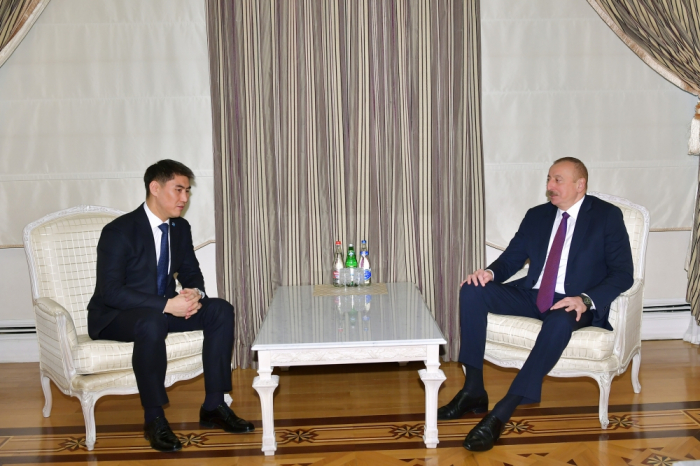 Minister Chingiz Aidarbekov extended greetings of President of the Kyrgyz Republic Sooronbay Jeenbekov to the head of state.

President Ilham Aliyev expressed his gratitude for the greetings of President Sooronbay Jeenbekov and asked the minister to extend his greetings to the Kyrgyz President.

- You are welcome, it is a pleasure to see you. You have an important event starting tomorrow. I am sure that it will be held in the spirit of all the instructions given by the heads of state during the Summit we held last year. Of course, our organization is growing stronger from year to year and is solving very important tasks to strengthen cooperation between all Turkic-speaking states. A lot of initiatives have recently been put forward in terms of political interaction, economic integration and activities in the field of culture and education. The Fund has been created, the Academy is functioning. So we are filling our work with content.

I believe that last year was successful for the development of bilateral relations between our countries. I had several contacts with the President as part of international events. This year too, there are important measures planned that will strengthen our cooperation. For us, Kyrgyzstan is a very close country, a fraternal country, and we want to increase bilateral cooperation. So I think that you and your colleague will determine the activities that should be jointly implemented this year.

- Thank you very much, dear Ilham Heydarovich. First of all, I would like to thank you. Despite your busy schedule, you took the time to meet and discuss the prospects for Kyrgyz-Azerbaijani relations. As you noted, last year and the year before last, thanks to your personal attention and the desire of our President to strengthen our fraternal and friendly relations, our cooperation was very actively advanced. Last year, during the Summit of the Heads of Turkic-Speaking States, a historic event took place here – our organization expanded and an office of the Turkic Council was opened in Europe. In our opinion, your meeting with our President was very important, during which you outlined promising and relevant agreements that we, the governments of the parties, are implementing today. Among them is the agreement on the construction of a Kyrgyz-Azerbaijani school and a Kyrgyz-Azerbaijani friendship park. On 24 December last year, we lowered the capsule of the school and on 10 January, with the participation of our President – as he pays great attention to our fraternal relations – the capsule was also lowered at the park area. This is the most prestigious part of our city and our townspeople received the news with great enthusiasm. We look forward to your official visit to the Kyrgyz Republic.